Numbers show dangerous conditions for pedestrians across the state

Traffic safety officials say it’s at intersections where one third of crashes are reported and while there are crosswalks and signals indicating when it’s safe to cross – people are still dying crossing the street at alarming rates.

The problem of pedestrian safety coming into focus after several deadly incidents now bringing more attention to how people need to stay aware and safe when walking along our roads.

Traffic safety officials say it’s at intersections where one third of crashes are reported and while there are crosswalks and signals indicating when it’s safe to cross – people are still dying crossing the street at alarming rates – deadly incidents they say increase after dark.

Washington Traffic Safety Commission started Target Zero in 2000 – hoping to put an end to the number of people killed on the roads.

Director, Shelly Baldwin, says they’ve made progress since, but there have been setbacks. 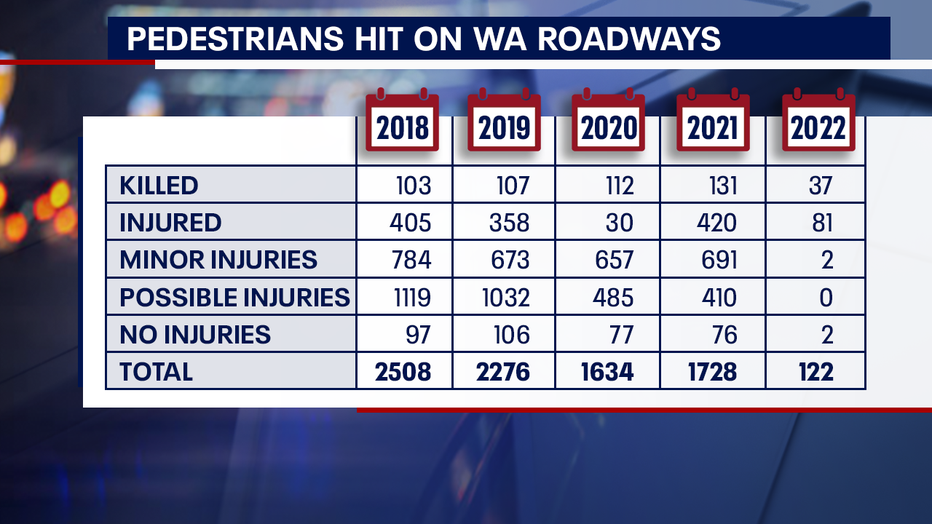 "We watched a lot of that progress disappear during COVID and this has been a really tough realization," Baldwin said.

Washington Traffic Safety Commission data shows 70 pedestrians were killed in 2002 that number up 133 in 2021.

"It's unacceptable. It's preventable. And we should be doing everything we can to make sure everybody gets home to their families save everything, no matter how they travel," Baldwin said.

Safer or not – one thing is for sure – deadly traffic incidents have increased 24% prior to COVID.

Washington State Patrol is investigating after one person was killed in a hit-and-run in Skagit County.

"Pedestrian deaths are at our highest number in decades," Baldwin said.

"It's an unpalatable number for me, of families that have been grieving for this loss. It's very, very difficult," Baldwin said.

Loved one's families across the state are now mourning.

Everett police are investigating after a pedestrian was struck and killed by a car Monday morning.

"When we think about pedestrian fatalities, one of the biggest, most obvious factors is speed," Baldwin said. "When a vehicle is traveling above 20 miles an hour, we start to lose the chance that a human body can withstand that force."

Washington Traffic Safety Commission is focused on decreasing the loss of life, as the deadliest months July, August, September and November are right around the corner.

Their goal is to educate both– drivers and pedestrians

"It's really incumbent upon drivers to remember that every corner is a crosswalk, whether it's marked or not, and it is the duty of the driver to yield to pedestrians," Baldwin said.

Traffic safety officials say the newly approved infrastructure bill will get them 30% in extra funding to combat the issue.