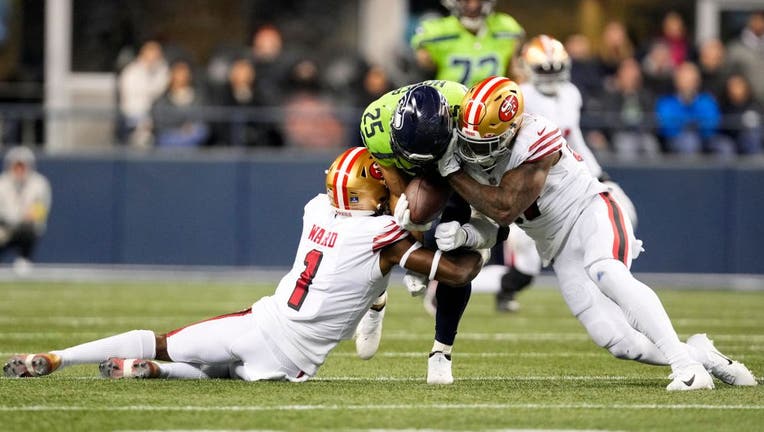 SEATTLE, WASHINGTON - DECEMBER 15: Jimmie Ward #1 and Dre Greenlaw #57 of the San Francisco 49ers force a fumble from Travis Homer #25 of the Seattle Seahawks during the second quarter of the game at Lumen Field on December 15, 2022 in Seattle, Washi

The Seattle Seahawks made too many mistakes on Thursday night against a San Francisco team fully capable of punishing them when they happened in a 21-13 loss that clinched the NFC West crown for the 49ers.

A pair of busted coverage to tight end George Kittle, a dropped interception from Quandre Diggs, and a costly fumble from Travis Homer were among the miscues from Seattle in a game that felt far more lopsided than the eight-point final margin indicated. The Seahawks could have found themselves in a 28-3 hole in the third quarter only to have a pick-six of Geno Smith by Deommodore Lenoir called back due to a (marginal) roughing the passer penalty against Nick Bosa.

Seattle is the only team in the NFL to have turned the ball over at least once in every game they've played this season. Diggs' drop of an interception of Brock Purdy late in the second quarter only cost the Seahawks some field position. However, Homer fumbled on Seattle's ensuing possession with Charvarious Ward recovering the ball and returning it to the Seahawks' 6-yard line. Two plays later, Christian McCaffrey was in the end zone and the 49ers had a 14-3.

The 49ers also got the ball to open the second half and Kittle's 54-yard touchdown made it a 21-3 game as the game broke hard and fast against the Seahawks.

"Everything was really there for us to have a great night," head coach Pete Carroll said. "They're a really good team and they're doing really good stuff and been really consistent. They got a bunch of wins in a row and all that. So it was going to be a fantastic win for us, and we just hung in there with an opportunity to get it done. We had an enormous swing at the end of the half. … We have a chance at a pick at midfield at least, and then the fumble gets them right on -- you know, down on the five-yard line. So, they were able to take advantage of those opportunities and did a nice job. I give them credit."

The Seahawks are eliminated from NFC West contention with the 49ers clinching the title Thursday night. It's Wild Card or bust for Seattle and they're on the outside looking in after falling back to .500 at 7-7 on the year. At the very least, the Seahawks will likely need to win two of their final three games against the Kansas City Chiefs, New York Jets and Los Angeles Rams to find a way to make the playoffs.

"The margin of victory is slim," defensive end Quinton Jefferson said. "We can't keep coming out here and shoot ourselves in the foot, blowing coverages, and missing fits. We can't do that. We can't win. We already knew that this game was going to be a dog fight. Everybody knew that. These next few games are really going to show who we are as an identity. We can fold and start making trips to Cabo, or we can fight and hopefully get a chance to play in the playoffs because I want to play in the playoffs. Every year that I've been in the NFL, I've played in the playoffs. I want to go back. We are going to see what the fight is like in this locker room."

Here are the takeaways from the loss to the 49ers:

– 49ers are quite good and they punished nearly all Seattle's mistakes.

The Seahawks played a cleaner, better football game that they have for much of the last several weeks. However, it wasn't enough to overcome a more talented 49ers roster despite relying on third-string rookie Brock Purdy at quarterback.

The run defense was better, but still not great.

"Guys played really strict and really disciplined and really committed together," Carroll said. That was really connected tonight. This is a team that has a lot of scheme and concepts and things like that, and they go out and pick at you. We were able to make the adjustments and hang with them and the players did a beautiful job, coaches did a really good job tonight to give us that opportunity."

Smith completed 31-of-44 passes for 238 yards and a touchdown on the day. However, the Seahawks couldn't find the end zone until only there was only 3:35 left to play while trailing 21-6. He was nearly intercepted by Talanoa Hufunga early. Lenoir's pick was called back due to Bosa's roughing the passer penalty. And Smith fumbled on a Hufunga sack in the first quarter as well.

"They're a great defense," Smith said. "You know, it was tough out there, but I feel like everyone on our side played with tons of effort. You see guys fighting the entire game all the way to the finish. We expected it to be a tough game and it was. I think that game was a lot closer than the score showed. Obviously there are no moral victories or anything like that, but I was proud of how we fought tonight."

The pass defense was solid, but not great.

Purdy only finished with 217 yards passing on the day for the 49ers with only 17 completions in 26 attempts. However, Kittle was left uncovered for touchdowns of 28 and 54 yards, and fellow tight end Tyler Kroft also found vast room for a 28-yard completion as well. Kroft's catch was part of a San Francisco drive that ended in a missed 43-yard Robbie Gould field goal try.

"They had the great double screen play, old play in the league. We haven't seen in a long time, but it worked great. Then we busted a coverage on the other touchdown. It was a gimme for them. Really wasn't a hard play at all. We just made a big mistake," Carroll said of Kittle's two touchdowns.

Then you have Seattle's big errors. Diggs' would-be interception could have given Seattle a great chance to score before the half. Presumably, a big return could have led to a pick-six for Diggs if he'd made the interception.

"I didn’t catch it. That’s as simple as it is. I’ll take that. That’s on me," Diggs said. "There have been a couple of those that I wish I could have back this year that I normally don’t drop. But it happened. I have no choice but to move on. … I’m not going to shy away from who I am. I’ve made enough plays in this league where I know when it’s on me and I know when it’s not. That play is on me, so we’ll go from there."

Homer's fumble then allowed the 49ers to take perfect advantage of the game situation. It's why so many coaches prefer to defer when they win the coin toss to begin the game. The chance to score at the end of the half, get the ball to open the second half, and score again without the other team possessing the ball can be a big shift in a game.

"We could have had the ball at midfield at least with two minutes to go and we start the drive there," Carroll said. "Who is to say -- I don't know how much Diggsy could have brought the ball back too. I don't know what he would've done with it. So we just missed that opportunity. Even more, they get the ball because we fumble on the next sequence and they're on the five-yard line. That's bad football."

Against a team as strong as the 49ers, those mistakes turn into a loss rather easily.

The loss of wide receiver Tyler Lockett to a broken finger late in Thursday's loss to the 49ers will leave the Seahawks without one of their most productive offensive pieces for at least a little while.

Lockett was injured on the final offensive drive of the game and is expected to need surgery to address the injury in the coming days.

Lockett had scored touchdowns in six straight games for Seattle, which set a new franchise record. Lockett was well on-pace for a fourth-straight 1,000-yard receiving season for the Seahawks as he continues to climb the record books as one of the best receivers in franchise history. Being without Lockett down the stretch will be quite the blow for a team who has lost four of their last five games.

Dee Eskridge is nearing a return from injured reserve as he is also recovering from a broken hand. Eskridge was injured in Seattle's loss to the Tampa Bay Buccaneers in Munich, Germany and has missed four games, including Thursday night against the 49ers. DK Metcalf, Marquise Goodwin, Penny Hart and Dareke Young are the other receivers currently on the 53-man roster. Eskridge's return could help cover the absence. Laquon Treadwell could be signed off the practice squad as another option as well.

Lockett has missed just two games in his career and only one to injury. He missed a game last season due to COVID-19 and one game at the end of the 2015 season when he sustained a broken leg. Carroll said Lockett is hoping to return in just two weeks, but it's still too nearly to know exactly what the recovery timeline will be.

– Margin for error is gone.

The Seahawks no longer control any bit of their destiny. After leading the division at 6-3 through the first nine weeks of the season, the Seahawks not only need to win themselves but hope for help around them. The Washington Commanders and New York Giants both sit at 7-5-1 after a tie against each other two weeks ago. They hold the final two playoff spots in the NFC currently. The Detroit Lions are making a run as well at 6-7 on Seattle's heels.

The tie between Washington and the Giants makes Seattle's task somewhat more difficult. While the two teams play each other again, and presumably one of them will actually lose this time around, it will still be one fewer loss in the standings than Seattle.

The Chiefs are 10-3 and one of the best teams in the AFC. Winning on the road at Arrowhead Stadium is always a difficult task and Patrick Mahomes and company will be tough to slow down. If Seattle can't get that win, they will have to win the final two games against the Jets and Rams at home and hope they get enough help to backdoor into a 7th seed.

The loss to the 49ers on Thursday night highlighted the talent disparity between a solid team in Seattle and a team that can actually make a run at the Super Bowl in San Francisco. The Seahawks are not of that quality right now. They're talented enough to make the playoffs. They've played to that level for quite a while this season and the rest of the surrounding teams in the NFC all have flaws as well. But practically all margin for error is gone for Seattle. They have to win at least two of their final three games to keep hopes of a playoff berth alive.