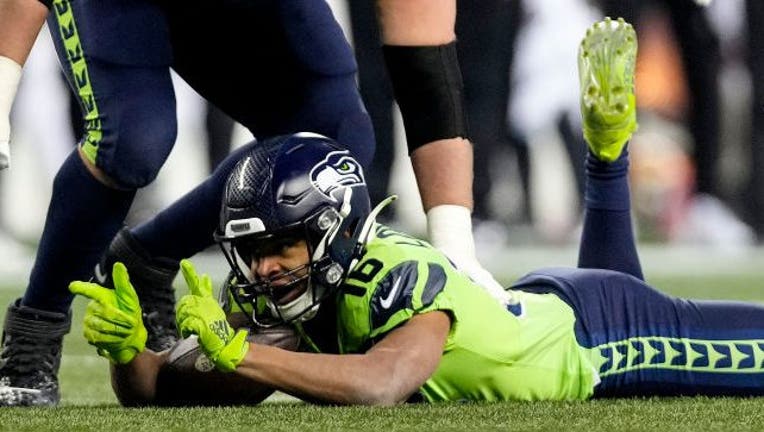 SEATTLE, WASHINGTON - DECEMBER 15: Tyler Lockett #16 of the Seattle Seahawks celebrates a first down against the San Francisco 49ers during the third quarter at Lumen Field on December 15, 2022 in Seattle, Washington. (Photo by Christopher Mast/Getty

Additionally, linebacker Jordyn Brooks was sidelined due to a neck injury and was unable to return.

Lockett was injured in the fourth quarter of the 21-13 loss to the 49ers. Lockett had a pass go through his hands with 3:49 left to play and he was hit from behind by cornerback Jimmie Ward. The contact drove Lockett into the ground. It's the play that seems most likely to be the one in which Lockett was injured. However, Lockett did play the final two plays of the drive – a 33-yard completion to Ken Walker III and a 10-yard touchdown pass to Noah Fant – before leaving for the locker room.

"Tyler Lockett broke a bone in his hand, his index finger, right in here, you know, and it's legit and all that and we got to figure out what's the right way to go," head coach Pete Carroll said of the injury. "I can't even fathom that. I can't fathom playing without Tyler. I got a chance to hang with him just just to try to express what it's like to be working with a guy like this for so long and such an incredible player. He's not in tremendous pain, he's just got a broken hand."

Carroll later added that Lockett has a spiral crack in his first metacarpal. He compared the injury to the one sustained by running back Rashaad Penny during training camp of his rookie season in 2018. The injury happened on Aug. 14 and forced him to miss the final weeks of camp after surgery. He was able to play in the team's regular season opener against the Denver Broncos on Sept. 9.

Carroll said there are a couple paths they can go with the injury for Lockett.

"There's a couple different ways that they can do the surgery and one of the ways gives them a chance to be back," he said.

Mone was injured midway through the first quarter and had to be helped off the field as he was unable to put any weight on his left leg.

"He had a legitimate knee injury. It's an ACL injury," Carroll said.

Mone was taking over the majority of the team's nose tackle snaps with Al Woods out of the lineup due to an Achilles injury. Mone's early exit tested Seattle's depth much more as Poona Ford and Myles Adams had to carry the workload.

Brooks exited the game early in the fourth quarter and was replaced by Tanner Muse for the rest of the night. Brooks was originally listed as probable to return before being downgraded to questionable.

"He's got a sore neck. And I'm not sure exactly what that is," Carroll said. "I don't have that on the report yet. We took him out because of that."