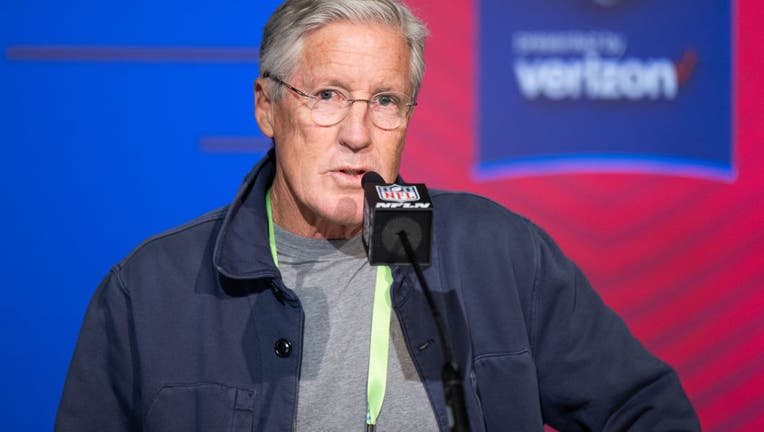 INDIANAPOLIS, IN - MARCH 02: Seattle Seahawks head coach Pete Carroll answers questions from the media during the NFL Scouting Combine on March 2, 2022, at the Indiana Convention Center in Indianapolis, IN. (Photo by Zach Bolinger/Icon Sportswire via

"We've been a little bit arrogant over the years with the way we play defense because we've been able to do it, just go ahead and play what we want to play. It's not that time right now. It's time to keep moving and keep growing," Carroll said at the NFL Combine in Indianapolis.

The Seahawks have had significant struggles defensive early in each of the last two seasons. While the unit eventually came together and played to a higher standard in each campaign, the holes on that side of the ball were clear.

After his promotion to defensive coordinator, Hurtt said he intends to make some changes to the team's defensive approach, which includes incorporating more principles of the 3-4 schemes he worked in under former Denver Broncos head coach Vic Fangio.

Carroll expressed his desire for changes to the scheme as well on Wednesday.

"I've been itching for some time now to make some adjustments as we go, which is always what we're doing and then how many adjustments, how big and how significant are they are the ones that that can determine your effectiveness. And sometimes you have to make these kinds of decisions and let somebody go," Carroll said.

"It won't look as different as you might think. We've always been 3-4, 4-3 mixed, I've told you that for years. The continuity of it is going to fit really well with outside backers that play defensive ends. So that's how you go from 3-4 to 4-3."

Carroll said the emphasis change will be geared toward getting more out of their pass rush units.

"We have a really significant group of guys that play inside with Al [Woods], and Poona [Ford] and [Bryan] Mone. Those guys are really significant players in stopping the run and bottling up the middle, but we need to advance ourselves in developing our edge talent.

"We've played the running game so well. Like 3.8 a carry for the season that's pretty darn good, you know, in this league, and maybe that's not the only thing we need to do well. We can do some other things too."

The main benefit of 3-4 pass rushing schemes is the ability to better disguise which players will serve as pass rushers on a given play. Carroll said that they intend to continue using more diverse coverages to pair with the varying defensive fronts they will utilize as well

"We feel like we need to do everything," Carroll said. "We need to use out single-high stuff and our two-high stuff to mix and do a really nice job of that, and Sean and Karl both bring a wide breadth of experience to help us with our looks and disguises to make it as intricate as we can, as difficult as we can on the quarterback.

Clint Hurtt looking to put own stamp on Seahawks defense

Carroll said it was difficult to make the change with Norton. They've worked together since 2006 outside of Norton's three-year run as defensive coordinator of the Oakland Raiders from 2016-17.

"I love Kenny Norton. We've been friends and coworkers for a long time, and really it is classic illustration of the decisions that are difficult at this time of the year," Carroll said.

But Carroll was equally excited by the new defensive staff the Seahawks have put together.

"What we did do is we made a really significant move in giving Clint Hurtt this opportunity to be the defensive coordinator," Carroll said. "Where he has been a big factor on our staff since he's been with us. He has been a guy I've leaned on all the time, made him assistant head coach to help me with all of the challenging team decisions that we make that do affect the defensive side of the ball, but both sides of the football.

"He's a great thinker. He's tough. He's creative. He's got a really good background, deep background in an area (defensive line). The reason that I liked hiring him when we did was because of the people that he had worked with and worked under, and it gave him a really diverse approach to the game, and he learned real well. So the scheme that we adjust and the things that we do and the adaptations that we make, will fit with Clint's background and I think can really keep them strong."

"Clint was a big part of that hiring and also a big part of attracting Sean to us. He was very, very much sought after by a number of clubs. He had all kinds of interviews. He was all over the place, and we were fortunate to get him, and we put him in a position where he has a good deal of influence scheme-wise and tactically in all ways. So I really liked that combination. I think he is a featured back-end guy, the coverage-oriented guy, linebackers and safeties and all that. And so those two guys together will give us a great one-two punch."

"Karl was just as hot as you can get with coaches putting together new staffs. They did everything they could to keep them there in Minnesota. His background is maybe not as revealing as who he is and how he approaches his game and what he brings. The connection between scheme with his background and in Sean's is very significant and was really important in the decision. And then we just had to compete and get it done. And Clint did a great job to close that."

Pete Carroll: Seahawks have no intention of trading Russell Wilson

Seattle Seahawks head coach Pete Carroll clearly stated on Wednesday his intention that Russell Wilson will continue to be the team's quarterback this season.