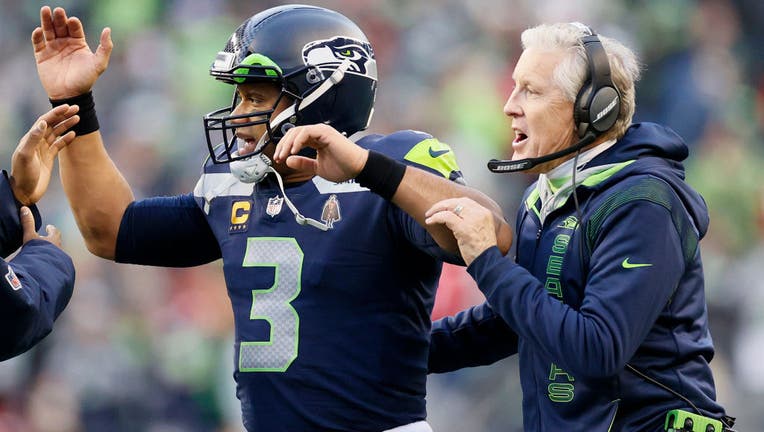 SEATTLE, WASHINGTON - DECEMBER 05: Russell Wilson #3 and head coach Pete Carroll of the Seattle Seahawks react during the third quarter against the San Francisco 49ers at Lumen Field on December 05, 2021 in Seattle, Washington. (Photo by Steph Chambe

INDIANAPOLIS - Seattle Seahawks head coach Pete Carroll clearly stated on Wednesday his intention that Russell Wilson will continue to be the team's quarterback this season.

"We have no intention of making any move there," Carroll said during a meeting with reporters at the NFL Combine in Indianapolis.

Rumblings about the future of Wilson in Seattle have percolated over the last year since Wilson expressed some dissatisfaction with the team and, in particular, the frequency in which he got hit. Wilson's agent, Mark Rodgers, told ESPN that they had not requested a trade from Seattle, but that Wilson – who has a full no-trade clause in his contract – would approve a trade to only the Dallas Cowboys, Chicago Bears, Las Vegas Raiders or New Orleans Saints.

People close to Wilson have kept the fires in the background burning for much of the last year, even if Wilson himself has repeatedly stated his plan to continue with the Seahawks.

After Carroll's podium session, he spoke more with local reporters and reaffirmed their stance on Wilson.

"What John [Schneider] says is ‘we are not shopping the quarterback.’ That’s what he tells them. He has talked to other teams. Because of all the media (rumors), they (other teams) think that something is going on. He’s fielded a lot of calls. But he’s fielded a lot of calls on everybody. But that one in particular, he’s got a pretty standard response," Carroll said, via Bob Condotta of The Seattle Times.

Seattle Seahawks quarterback Russell Wilson has been named to the 2022 Pro Bowl roster for the NFC.

Wilson is coming off one of his most disappointing seasons since joining the Seahawks in 2012. Wilson missed games for the first time in his career as a mallet finger injury required surgery and forced him to miss three games. When he returned to the lineup, he wasn't close to his normal self for at least another month of action as the Seahawks scuffled to their first losing season in the Wilson era.

Wilson completed 64.8 percent of his passes for 3,113 yards in 14 games played. He threw 25 touchdowns with six interceptions.

The biggest area of struggle for Wilson came on third downs, where he completed a career-worst 51.5 percent of his pass attempts. His third down completion percentage ranked fourth-worst in the NFL this season (among quarterbacks with at least 50 attempts) ahead of only Baker Mayfield of the Cleveland Browns, and rookie quarterbacks Justin Fields (Chicago Bears) and Trevor Lawrence (Jacksonville Jaguars).

It was the worst mark posted by Wilson since he completed just 55.8 percent of his third down attempts in 2017, which was the last season the Seahawks had failed to make the postseason prior to 2021.

Wilson did finish the season strong overall. Over the final six games of the season, Wilson completed 64.6 percent of his passes for 1,302 yards with 13 touchdowns and three interceptions. Wilson's third down percentage climbed to 58.7 percent over that stretch as well.

The fact that a season Wilson tossed 25 touchdowns and had a passer rating of 103.1 was a relative disappointment speaks to the standard Wilson has set through his 10 seasons in Seattle.

"Russell and I have had a partnership for all of these years. We've worked at this the whole time," Carroll said of his relationship with Wilson.

"We've communicated on a really high level ever since really the first game we had when I told him he's going to be the starter. At that point, I told him that he and I are going to be in front of this program over the years if things work out well, we hang together, and we're successful, we're going to have to take on a lot of that responsibility. And with that thought, I felt it was hugely important that we communicated really well and that we would be in touch, we know what's going on, and we could take the time to step aside some of the action that's at hand and make sure that we keep things in proper perspective and that's what we've done.

"That's really what this has been about. There's been a lot of talk and all that, you know. That's just this time of year, but I feel like we're on a good page, that we know what's going on, and we're communicating really well still."

While circumstances can always change, the Seahawks and Wilson appear to be committed to their relationship for at least another season. Wilson's current contract runs through the 2023 season.