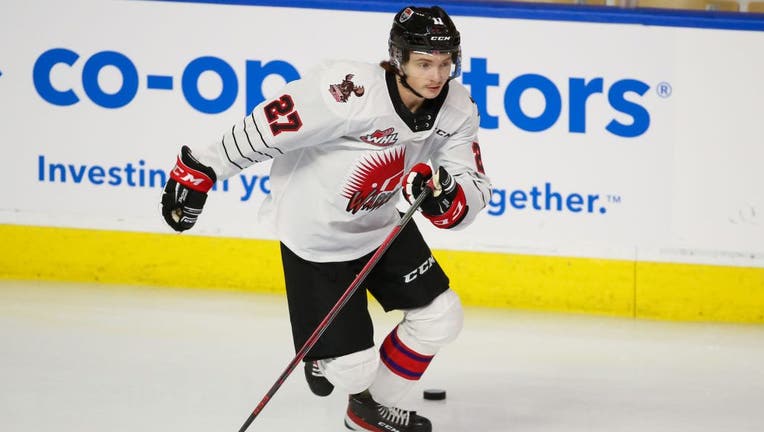 KITCHENER, ONTARIO - MARCH 23: Jagger Firkus #11 of Team White skates for the puck during morning skate prior to the 2022 CHL/NHL Top Prospects Game at Kitchener Memorial Auditorium on March 23, 2022 in Kitchener, Ontario. (Photo by Chris Tanouye/Get

The Seattle Kraken had a stockpile of selections heading into day two of the NHL Draft. After falling into Shane Wright with the fourth overall pick on Thursday night, the Kraken built their organizational depth through the draft's second day.

Jagger Firkus, a right winger from Moose Jaw of the Western Hockey League, was the first of four second-round picks by the Kraken on Friday.

Firkus, 18, had 80 points with 36 goals and 44 assists in 66 games played for Moose Jaw last season. He also added six goals and six assists in 10 playoff games.

A pair of Finnish products were next to Seattle. Right winger Jani Nyman, 17, scored 35 points with 18 goals and 17 assists for Koovee in the Mestis league in Finland, which is the country's second-tier league. He was with Koovee on loan from Liiga team Ilves.

Goaltender Niklas Kappo, 18, was Seattle's third pick of the round. Kappo had a 2.06 goals against average and a .914 save percentage in 29 games played for Kärpät's U20 team.

David Goyette, an 18-year old center for the Sudbury Wolves of the Ontario Hockey League, was taken by the Kraken with the 61st overall pick. Goyette had 73 points (33 goals, 40 assists) in 66 games played for Sudbury last year.

North Bay (OHL) defenseman Ty Nelson was the Kraken's first selection in the third round. Nelson, 18, had 51 points (nine goals, 42 assists) in 66 games played for North Bay this season. He also once split a puck in half in a game.

Jugnauth, 18, had 50 points with nine goals and 41 assists in 52 games played for West Kelowna last season. He is committed to play college hockey at the University of Wisconsin this fall.

Robertson, 19, racked up 81 points with 41 goals and 40 assists in 68 games played for Peterborough. He added three goals and an assist in four playoff games as well.

Center Barrett Hall was Seattle's sixth round pick. Hall, 18, had 55 points with 25 goals and 30 assists in 25 games played for Gentry Academy (St. Paul, Minn.). He also scored 20 points with five goals and 15 assists in 19 games for the Minnesota Wilderness of the North American Hockey League.

Jackson, 19, scored 62 points with 30 goals and 32 assists in 45 games for the Battalion this year. He added nine goals and five assists in 12 playoff games for North Bay as well.