Chilly week ahead with rain this weekend

Those in areas prone to flooding are on alert for rising waters. FOX 13 chief meteorologist Lisa Villegas and forecaster Erin Mayovsky have the latest conditions.

Seattle - Widespread rain and wind made for an interesting day for many communities.  These conditions are all thanks to a powerful "Atmospheric River" sending subtropical moisture and warmth into the Northwest.

Highs Friday landing above average by a couple degrees with 57 at the airport. 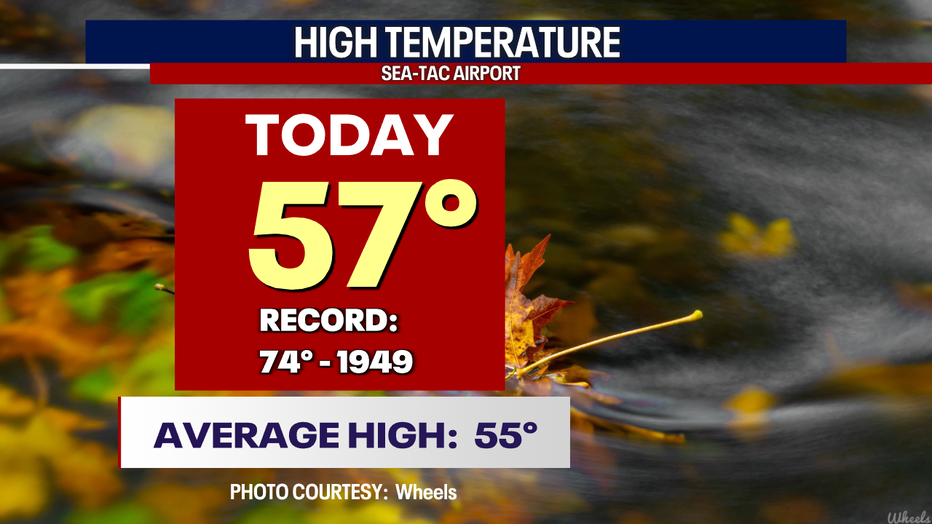 This Fall storm not only produced heavy rain and mountain snow it also packed a huge punch in the wind department.

Check out some of our peak wind gusts through the 8pm hour Friday.  The Cascades hitting top speeds of 104 mph at White Pass! 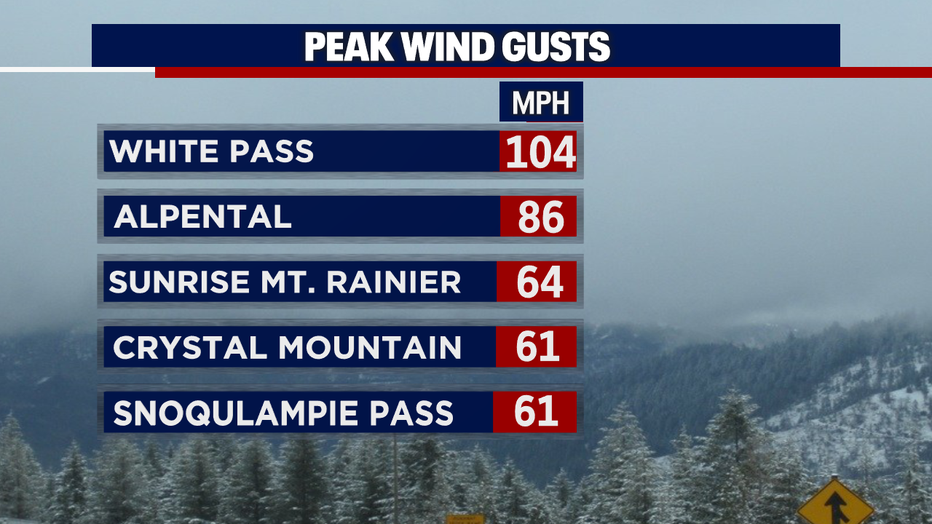 In the lowlands winds gust to 56 mph at Gig Harbor with 51 mph in Morton.  The airport hit 45 mph along with Bremerton and many other neighborhoods gusting into the 30s. 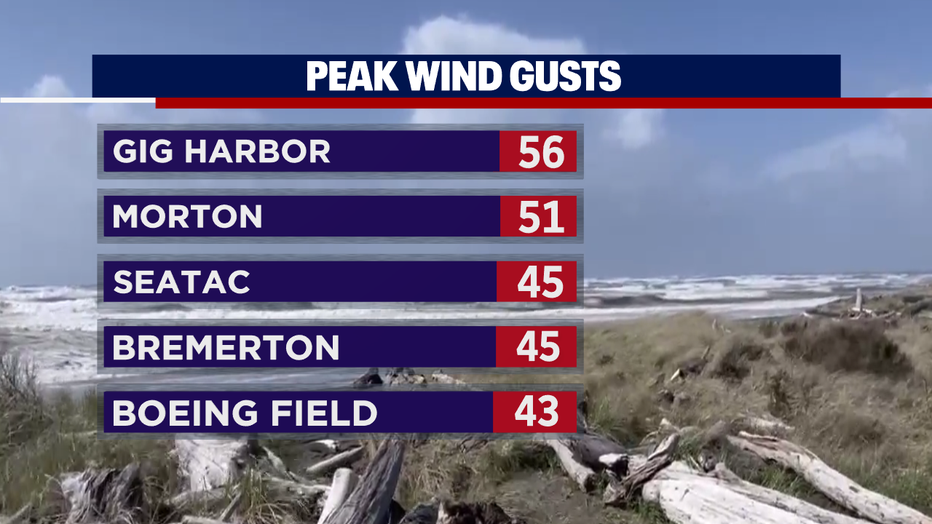 We're still tallying up impressive rain totals around the region.  As of 8pm Friday night Snoqualmie Pass had 6.73" in the bucket.  Olympia pulling down nearly 3.5" and Seattle only .23" because of the rain shadow. 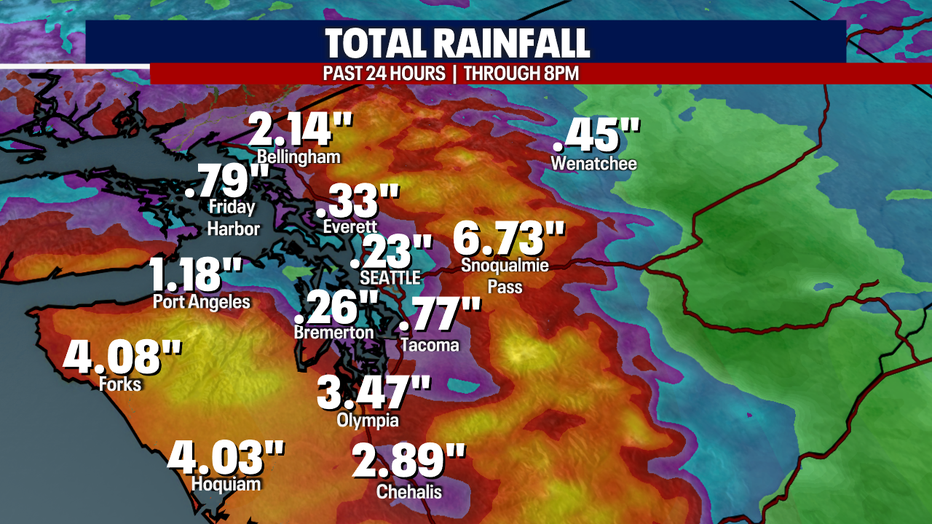 We are watching all area rivers for flooding with some feeling the pressure of today's heavy rain more than others.

The main river to watch overnight is the Puyallup as it pushes towards major flood stage into the early hours of Saturday.  Most other rivers have crested or will crest and slowly start to come down. 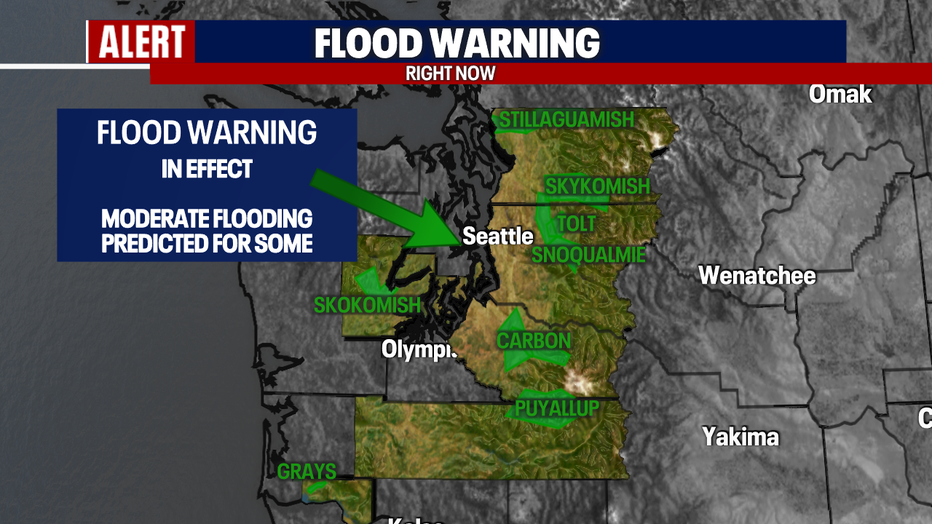 While heavy rain lets up and turns to scattered showers tomorrow around Puget Sound snow will start to fall over the mountains.  And that is why a "Winter Weather Advisory" is up this weekend for the Cascades above 1,500'.  The mountains could see up to another foot of snow, especially the southern Cascades.

We expect difficult pass travel with potential closures.  Know the roads before you go! 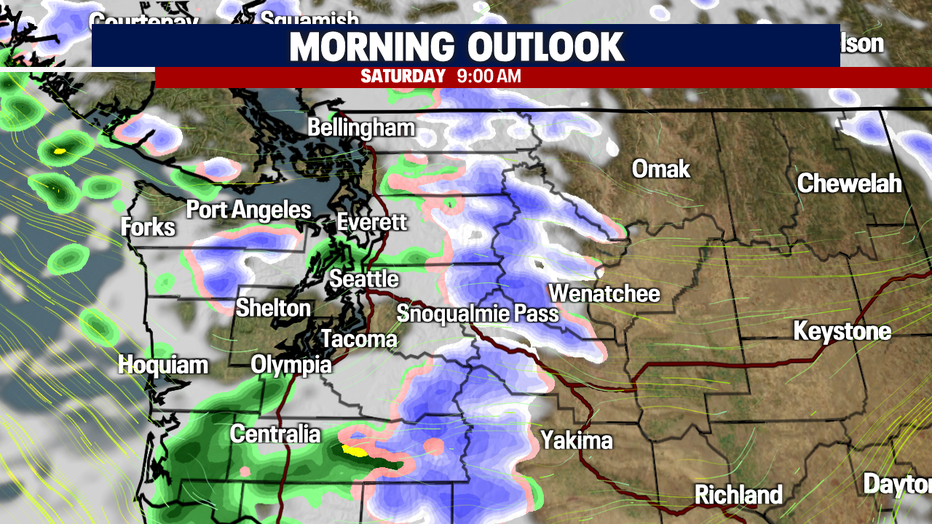 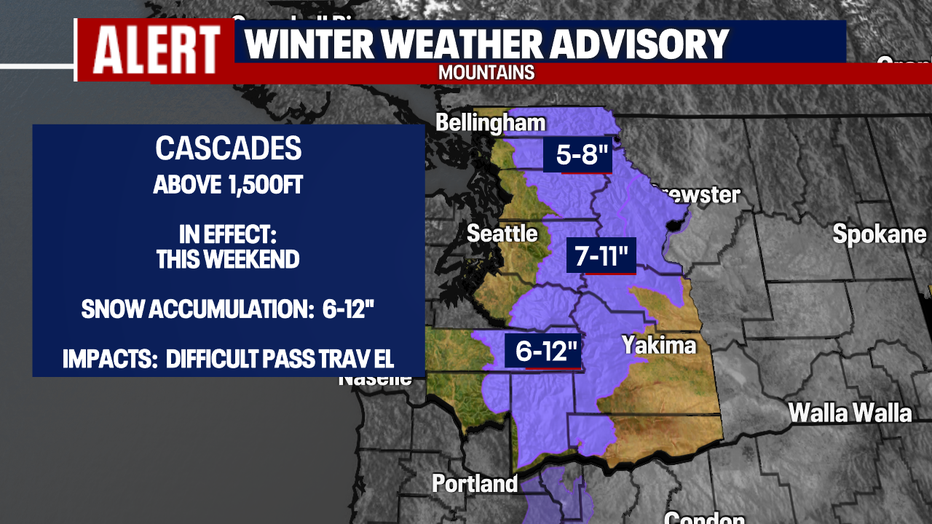 Winds will continue to gust Saturday with speeds up to 45 mph through the Islands with lesser gusts into the metro area by midday.  We'll finally start to calm down to just breezy conditions later Saturday night. 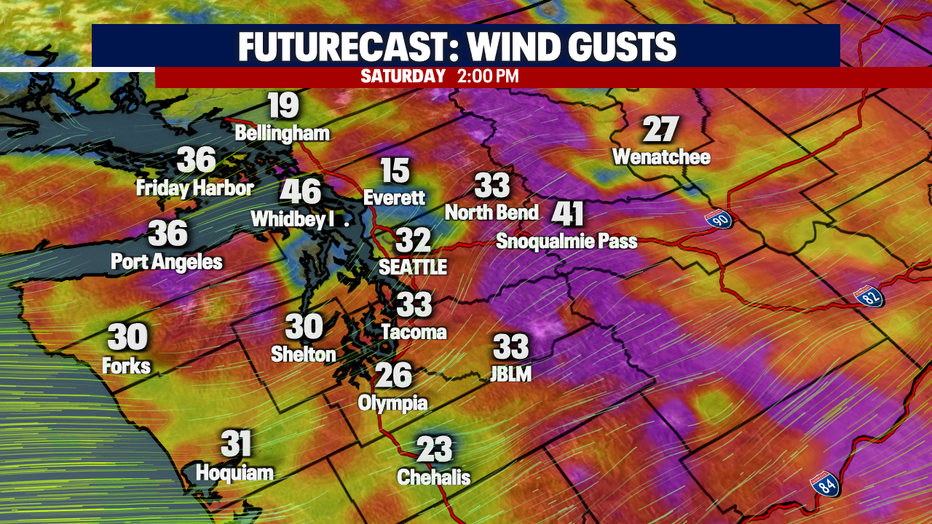 Although rain and wind will let up tomorrow there the potential threat for a few thunderstorms to pop up.  Key areas to watch are SW WA mid-morning and the North Sound later in the evening.

Highs Saturday will cool by about 10-degrees into the mid to upper 40s.  Normal for this time of year is now 54. 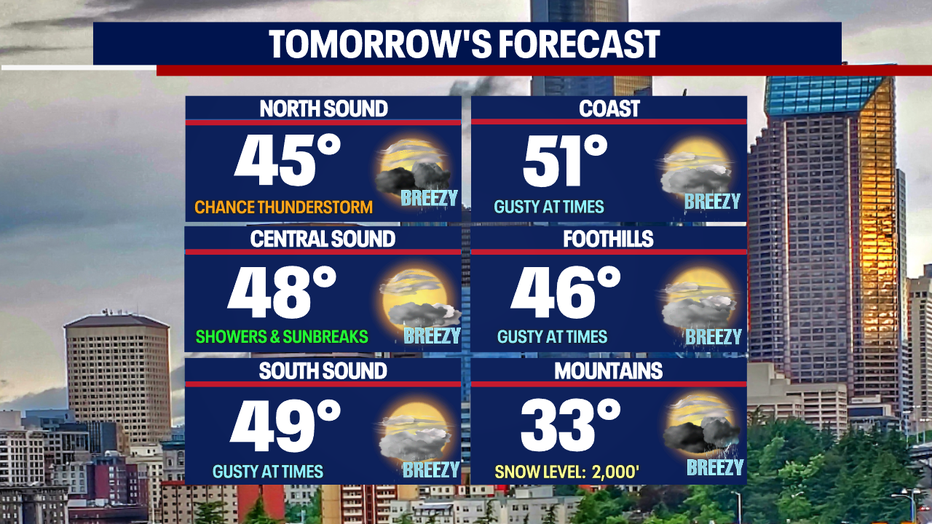 Heavy rain returns along with mountain snow late Saturday into the early morning hours of Sunday.   Snow will continue to pile up over the passes. 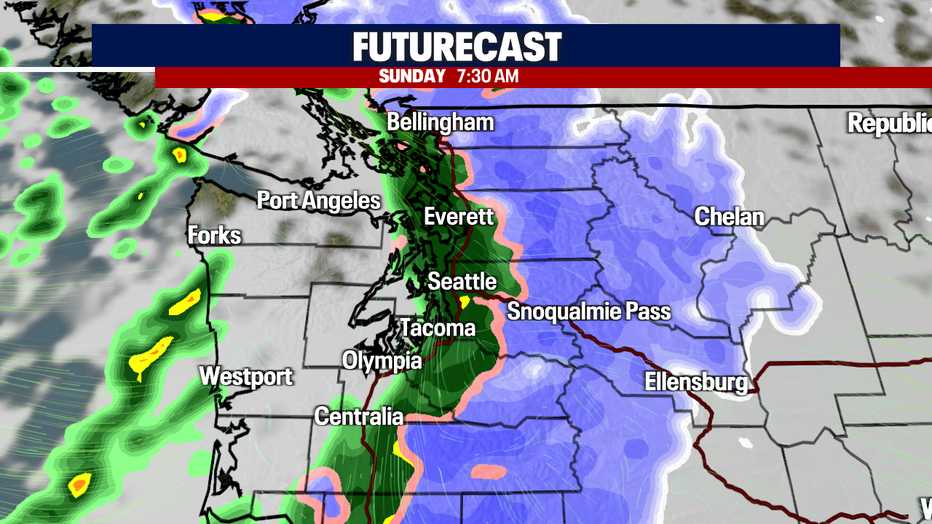 Now, lets talk about the start of the work week….

This is where the forecast gets a little interesting with the chance for mixed showers as we wake up very early.  Temperatures near 6am are in the mid 30s and with a bit of moisture in the area some of us, mainly the North Sound, might see some snowflakes mixing in with rain.  These conditions will be short-lived as we dry out by midday. 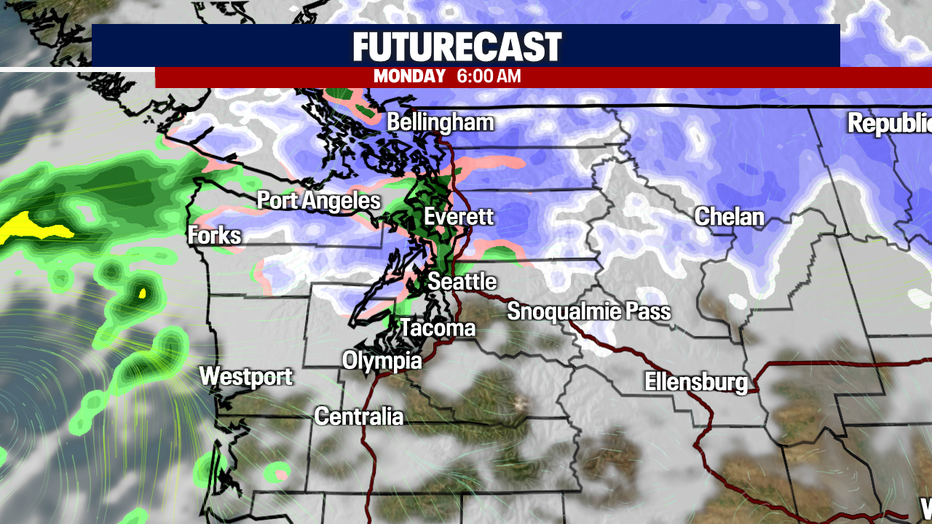 A nice drying trend comes our way Tuesday through Thursday next week, but boy will we be cold!  We're expecting highs only in the low 40s with overnights in the upper 20 to low 30s.  We just might see our first real freeze of the season! Stay tuned! 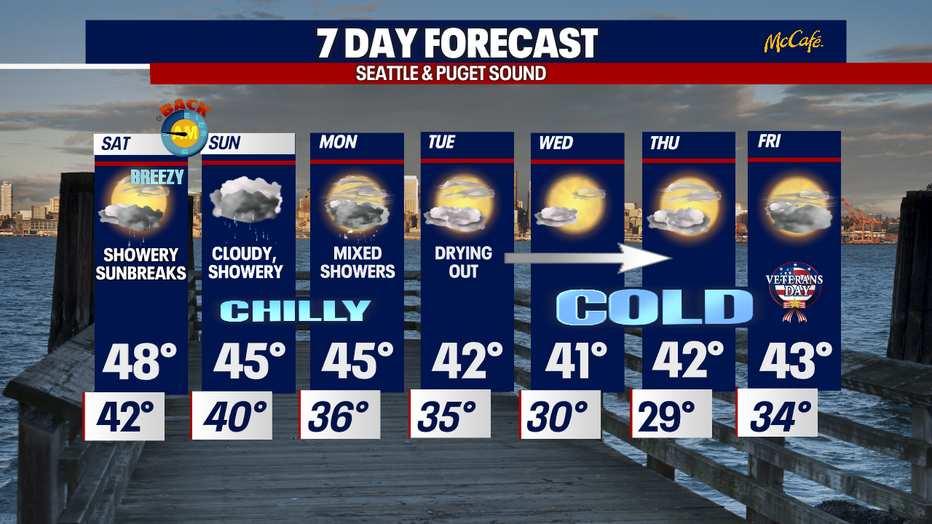