KIRKLAND, Wash. -- - Nestled in the city of Kirkland is Kingsgate, a neighborhood decorated with nice homes and families who feel safe and peaceful. But it’s also the town that may be harboring the secrets of a boy’s murder.

Pat Cress was 13 in the spring of 1983. On the morning of April 30, Pat woke up at a friend’s house. It was the first time he’d ever slept away from home.

He wanted to extend the sleepover, but his parents told him no, it was time to come home. His parents say he agreed to walk about a mile to meet them at a Safeway grocery store. It was a sunny day in the middle of the afternoon.

Pat reportedly walked out of his friend’s house, and vanished.

Pat’s father is haunted by the “what ifs” in this case, including how different life would’ve been had he gotten directions to Pat’s friend's home and picked him up there.

Pat’s parents reported him missing when he didn’t show up to the grocery store. They instantly knew something was wrong, but they say law enforcement wasn’t so sure.

They thought Pat was a runaway, so the family says they had to search for their son on their own. For 18 agonizing days Pat was missing without a trace.

And then there were the rumors.

“We heard the rumors just like everybody else,” says Pat’s father Dick Cress.

The rumors were morbid, especially since they were coming from Pat’s peers, middle-schoolers. The talk was that Pat was murdered, his head bashed in and his body in water.

But those rumors didn’t seem to mean much at the time, until 18 days after Pat first disappeared.

Dick Cress says one of the most painful moments in this decades-long nightmare was learning his wife, Katie, was at their home without him when there was that dreaded knock at the door. He chokes up recalling his wife having to hear a stranger tell them their son’s body had been found.

As some of the middle-schoolers had said, Pat had been murdered.

“I can still hear my dad’s knees hitting the floor when my mom ... when he came home that day that they’d found Pat’s body ... Every once in a while I hear a sound that sounds so much like it, and you’re right back there,” says Pat’s sister Kimberly Burke.

Submerged in a water-filled ditch, Pat’s body, his radio, and wallet were buried under leaves and debris at a construction site not far from his friend’s home or the Safeway where he was supposed to meet his parents.

He’d been killed from blows to the head. The devastating discovery officially ended his family’s constant searching.

“I will tell you there was a time that my wife and I were less than 10 feet from his body...and God blessed us that afternoon because I can’t imagine what our lives would be if we had stumbled on his body that afternoon. I just can’t think about that,” says Dick Cress.

The discovery of Pat’s body didn’t just confirm his family would now forever live in a fog of grief and anguish. It also meant that some of the grim rumors going around the middle school were true. And that pointed to a chilling theory: the children in this quiet middle class neighborhood knew about the rumor before anyone else.

“Back in 1983 I remember hearing about a young boy getting murdered essentially in my neighborhood,” says Mike Mellis.

Decades later, he found himself working homicide in the same department that handled Pat’s case.

"I made a point of saying, 'I want that case, don't give it to somebody else,'" he said.

Mellis has now had the case for longer than Pat Cress was alive. The case that once seemed simple has proven to be anything but.

"I still can't find a single person that will say 'I heard that rumor' very specifically from this very specific person."

Witness accounts are so jumbled, it's hard to tell fact from fiction. That brings Mellis to another possible piece of the puzzle: while Pat reportedly agreed to walk to Safeway to meet his parents, the two boys he was with that afternoon recall things a little differently.

"Their memory is that Pat sits down and waits for somebody to come get him," Mellis said. "Now they don’t know or there's no definitive way of knowing who was gonna pick him up, but these two young men remember that Pat suddenly announces, 'There’s my ride, I’m gonna go,' and walks out of the door."

"He sees Pat go around the far side of the car and then turns away. He doesn't see anything else," Mellis said.

This account takes the case in a whole other direction, because according to Pat's family, he knew his parents were picking him up at Safeway. As Detective Mellis explores the theory that someone may have picked Pat up that afternoon, he's also focused on a piece of evidence he says is significant: the transistor radio found with Pat's body.

Mellis believes the radio was bought as part of a set of identical radios that were given as presents to siblings or a group of friends. He's hoping someone in the Kingsgate area who had a matching radio will speak up.

As investigators and loved ones continue to explore the unknowns, they remain convinced that someone out there knows something. Pat's father, now 81-years-old, hopes he gets to see justice for his son within this lifetime.  "Even now, 36 years later, it doesn't get any easier," Dick Cress said.

Thanks to donations, Crime Stoppers of Puget Sound is offering a $5,000 cash reward for information that leads to an arrest and charge filed in the case.

You will remain anonymous.  Submit tips to Crime Stoppers through the P3 Tips App that you can download to your cell phone for free or go to www.P3Tips.com.  You can also call 1-800-222-TIPS (8477). 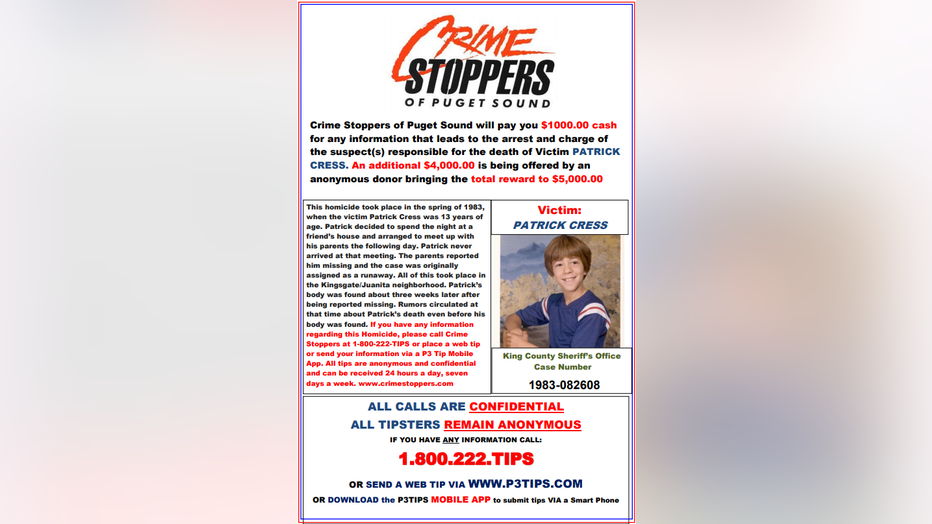