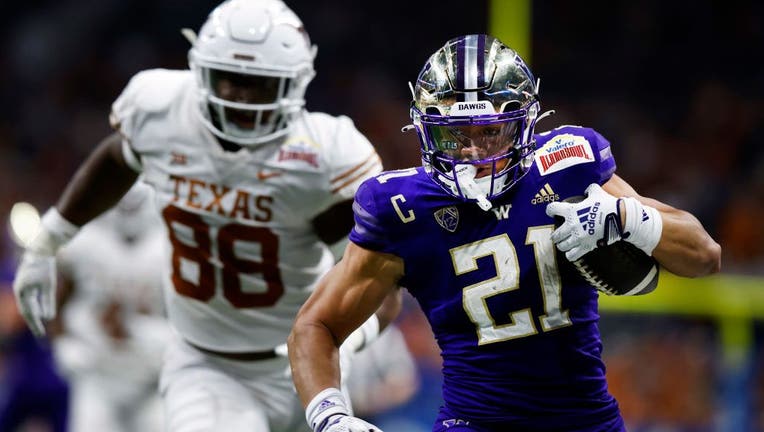 Michael Penix Jr. threw for 287 yards and two touchdowns, Wayne Taulapapa rushed for 108 yards and a score, and the Washington Huskies beat the Texas Longhorns 27-20 in the Alamo Bowl on Thursday night.

The Huskies (No. 12, 11-3) took advantage of a Texas team playing without running backs Bijan Robinson and Roschon Johnson, both of whom declared for the NFL Draft. The Longhorns (No. 20, 8-5) managed to rush for just 51 yards against Washington in their absence.

Eight different receivers caught passes for the Huskies as the wealth was spread around in the passing for the Huskies. Jalen McMillan's eight catches for 58 yards and a touchdown led the receiving effort for Washington.

In the victory, Penix became Washington's single-season passing leader. Penix finished the season with 4,641 passing yards for the Huskies, which surpassed the 4,458 yards of Cody Pickett set in the 2002 season.

Washington held a 27-10 lead early in the fourth quarter after McMillan's 8-yard touchdown extended their advantage. Texas clawed back and had a chance with a last minute drive to tie the game only to fall short.

A facemask penalty on Washington helped kickstart a Texas scoring drive to answer. The Longhorns marched 78 yards on 10 plays only to sputter inside the red zone and were forced to settle for a 30-yard Bert Auburn field goal to tie the game at 3-3.

Taulapapa sprung free around left end for a 42-yard touchdown run on the Huskies ensuring drive to put Washington back on top 10-3.

The offenses would go stagnant until UW's final drive of the half. The Huskies converted three third downs on the drive as they went 88 yards on 10 plays to get on Texas' doorstep. However, a third down pass to Rome Odunze slipped through his hands on a would-be touchdown as the Huskies settled for a 23-yard Henry field goal to take a 13-3 lead into the break.

Texas fired back on the first drive of the third quarter. A screen pass to Jonathon Brooks broke free up the right sideline for a 34-yard touchdown as the Longhorns cut the deficit to three.

Penix converted a fourth-and-1 on a quarterback sneak from Washington's own 40-yard line to spark another touchdown drive. A 17-yard completion to Quentin Moore moved the Huskies into Texas territory. A 16-yard strike to Jack Westover moved UW to the Texas 6-yard line before Taj Davis took a bubble screen from Penix into the end zone to give Washington a 20-10 lead.

Xavier Worthy was unable to catch a pair of deep passes from Quinn Ewers on consecutive plays on the Longhorns' ensuing drive as they were forced to punt.

Penix and the Huskies immediately capitalized.

Taulapapa picked up 13 yards. Davis caught a pass for 11. Odunze caught another pass for 11 more. Quickly the Huskies were into the Texas end of the field again. A 9-yard completion to Devin Culp on fourth-and-2 kept the drive moving. Jalen McMillan would then cap the drive by plucking a low throw from Penix for an 8-yard touchdown as UW's lead grew to 27-10.

Ewers tried to lead Texas back. An 11-play, 74-yard drive was capped by a 3-yard Brooks touchdown run to trim Washington's lead to 27-17.

After the Huskies reached the Texas 32-yard line on their next drive, a false start penalty on Jaxson Kirkland backed Washington up out of field goal range. UW elected to go for it on fourth-and-11 from the 37-yard line only to have Penix's pass to Odunze fall incomplete for a turnover on downs.

With only 4:21 left to play trailing by 10, Texas worked quickly to further cut into the lead. A 23-yard completion from Ewers to Casey Cain was the highlight of the drive as the Longhorns reached the UW 8-yard line. However, Washington's defense held to force a 26-yard Auburn field goal that made it 27-20 with 1:40 remaining.

Denzel Boston recovered an onside kick attempt for Washington. The Huskies were unable to get the first down they needed to run out the clock with the football in their hands. However, Voi Tunnufi sacked Ewers as time ticked away and a desperation heave for Cain picked up 49 yards, but needed 41 more to find the end zone.

Ewers threw for 369 yards with a touchdown for Texas in the losing effort.