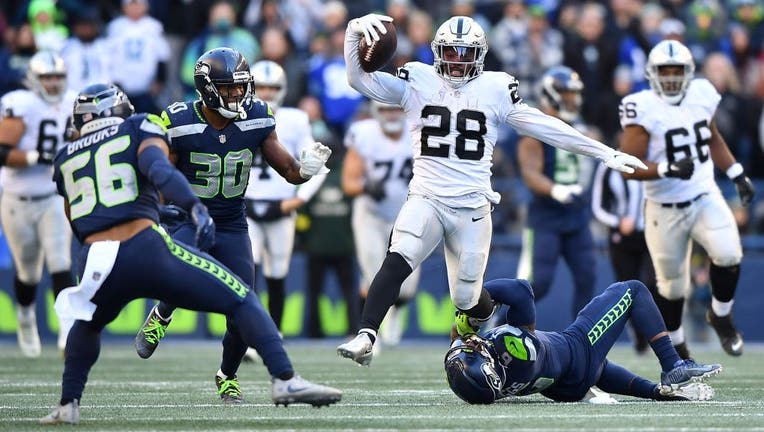 SEATTLE, WASHINGTON - NOVEMBER 27: Josh Jacobs #28 of the Las Vegas Raiders runs with the ball while being tackled by Quandre Diggs #6 of the Seattle Seahawks in the third quarter at Lumen Field on November 27, 2022 in Seattle, Washington. (Photo by

SEATTLE - So it appears the run defense of the Seattle Seahawks may still be a bit of a problem.

Josh Jacobs rushed for a Seattle opponent record 229 yards, including an 86-yard game-winning touchdown in overtime, as the Seahawks lost 40-34 to the Las Vegas Raiders in overtime.

Jacobs' 229 yards surpasses the 221-yard effort of former Los Angeles Raiders running back Bo Jackson in a 37-14 loss to the Raiders on November 30, 1987. It's the second time this season Seattle has allowed over 200 rushing yards in a game to an opponent. Taysom Hill and Alvin Kamara led the New Orleans Saints to 235 combined rushing yards in a 39-32 loss in October.

Seattle also lost the battle on the offensive line of scrimmage as well. Ken Walker III was limited to just 26 yards on 14 carries by the Raiders. Walker now has been held to just 43 yards on 24 carries over the last two games against Las Vegas and the Tampa Bay Buccaneers as the Seahawks' rushing game has become non-existent.

Geno Smith had another really solid performance outside of a pair of turnovers. Smith completed 27-of-37 passes on the day for 328 yards with two touchdowns. He was 20-of-25 for 239 yards and both touchdowns after the interception in the second quarter.

Smith was intercepted after a miscommunication with wide receiver Tyler Lockett allowed Denzel Perryman to pick off an errant throw. Smith also lost a fumble on a botched read-option exchange with Walker early in the fourth quarter that thwarted a scoring opportunity.

The Seahawks' offense had some chances to get the winning score in the fourth quarter and overtime and were unable to come through. But the defense just kept getting gashed by Jacobs and the Raiders.

"We did some things in the game we wanted to on defense to try to slow down Davante [Adams] and take him kind of real seriously," Carroll said of the Raiders' star receiver. "We gave up way too much in the running game. We did not play the run worth a darn in getting that done. We didn't rush the passer as well as we needed to either. That's just what happened in this game."

The loss drops the Seahawks (6-5) out of the playoff picture in the NFC behind the San Francisco 49ers in the division, and the Dallas Cowboys (8-3), Giants (7-4) and Washington Commanders (7-5) in the Wild Card race.

"I'm really disappointed that we're sitting here talking about a game we didn't win, because that was a game we should have won, could have won," Carroll said.

Here are the takeaways from the overtime loss to the Raiders:

After getting gashed by the Saints on Oct. 9, the Seahawks made a shift with their defensive front that cleaned up much of their issues in the weeks to come. Strong performances against the Arizona Cardinals twice, the Los Angeles Chargers, and New York Giants signaled that Seattle had made real improvements against opposing rushing attacks.

Rachaad White then rushed for 105 yards as part of 161 total rushing yards for the Tampa Bay Buccaneers two weeks ago in Munich, Germany in a setback for the group. Perhaps it was the questionable field conditions that were the reason for the struggles overseas?

Well, the performance against the Raiders suggests that's too easy an explanation.

As Carroll mentioned, the Seahawks paid ample attention to Adams in the passing game. The trade-off was that Seattle went lighter on the defensive line at times with plenty of nickel defenses against Las Vegas. Jacobs had success against the lighter fronts and against the heavier looks when Seattle tried to adjust later in the game as well. He just had success. Period.

"We have to fix it," said safety Quandre Diggs, who had two interceptions of Raiders' quarterback Derek Carr in the first quarter. "Everybody’s going to expose it if we don’t fix it. We fixed it for a little bit. It showed its head today. At the end of the day, if we don’t stop the run, we’re not going to be able to do anything. It starts with everybody."

The 283 combined rushing yards by the Raiders is also a record for most allowed by the Seahawks, surpassing the 279 yards allowed to the St. Louis Cardinals in 30-24 loss in the team's inaugural season of 1976.

Carroll said there was a common thread to the success seen by the Buccaneers and Raiders over the last two weeks. They utilized a fullback much more than other opponents they'd faced this season.

"They stayed in regular personnel, used the fullback," Carroll said. "More unique than other games we played. That was a problem for us again. It's old style ball. There's nothing new about that at all. It's just that it's different and we didn't adjust to it in either of the last two weeks."

"It's gonna hurt, man. It always hurts," Ford said of the loss. "... Especially to lose it on a run play that hits for like 80 yards is just unacceptable of us and we're going to shake back."

Regardless of how the rushing yards are coming, it appears that the mid-season improvement is not quite as sustainable as it once seemed.

– Ryan Neal's injury could be a highly consequential one.

Strong safety Ryan Neal left the game on the first drive of overtime after helping to stop Jacobs on a third down carry. Neal was in obvious discomfort after the play and came off the field holding his right arm.

Carroll said after the game that it was an elbow injury for Neal, but that the exact issue was not yet clear as of the time he spoke with reporters.

Neal has played really well in taking over for Jamal Adams at the safety spot. Josh Jones handled the job for a few weeks while Neal returned to full health from a high-ankle sprain in training camp. But it was Jones that was diving and grasping at air as Jacobs ripped into the open field on the 86-yard touchdown run to seal the victory in overtime.

If Neal is set to be out for an extended period of time, Seattle will have to turn to Jones or rookie safety Joey Blount to handle the safety duties in his absence. Jones has played the spot and as a part of Seattle three-safety packages throughout the year. Blount has drawn praise on special teams but has yet to play a defensive snap this year.