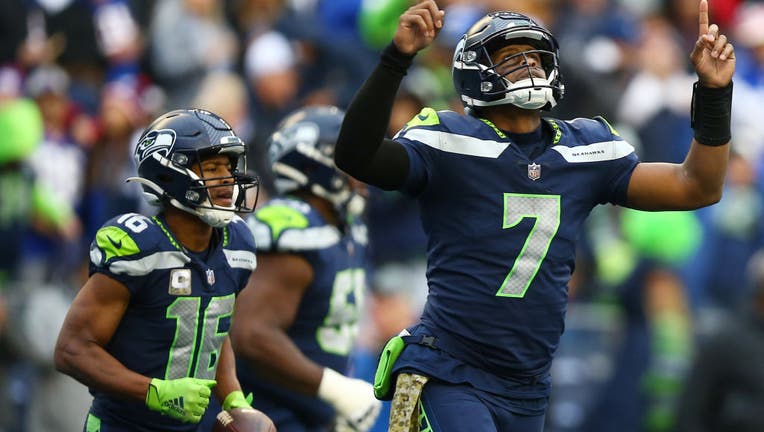 SEATTLE, WASHINGTON - OCTOBER 30: Geno Smith #7 of the Seattle Seahawks celebrates against the New York Giants during the fourth quarter at Lumen Field on October 30, 2022 in Seattle, Washington. (Photo by Lindsey Wasson/Getty Images)

SEATTLE - A 27-13 victory over the previous 6-1 New York Giants seems to confirm that this Seattle Seahawks team is for real.

It's not just that the Seahawks beat the Giants, it's the way in which they did it. They held Saquon Barkley to just 53 yards on 20 carries – an average of 2.7 yards per carry – for a team that entered the week as the second best rushing team in the NFL. Just three weeks ago, the Seahawks had allowed 235 yards rushing and a pair of 100-yard rushers to the New Orleans Saints in Alvin Kamara and Taysom Hill.

Geno Smith authored two fourth quarter scoring drives to break a 13-13 tie and lead Seattle to victory. For all the things Smith has proven already this season, perhaps the one thing still left to show was that he can lead decisive drives late in games when the result was in the balance. The Seahawks had fallen short last season in close games against the Los Angeles Rams, Pittsburgh Steelers and Saints when Smith was filling in for Russell Wilson.

And they did it against a team that had lost just once entering Sunday's game in Seattle.

The Seahawks remain in first place in the NFC West ahead of the San Francisco 49ers (4-4), who beat the struggling Los Angeles Rams (3-4), 31-14. Perhaps no one but the Seahawks themselves though they were capable of being a factor in the playoff race as the season nears its midpoint.

"It's easy for all the internet coaches and for everyone outside of the organization to write people off and say this and say that," defensive end Shelby Harris told FOX 13's Ian Furness. "But you're not in the building working with us every day. All we need is us. You write us off if you want to, we're gonna come smack you in the face."

Here are the takeaways from the Seahawks win over the Giants:

– Geno Smith delivers a clutch fourth quarter performance to carry the Seahawks to a win.

In relief of Wilson last season against the Rams, Seattle trailed 23-17 with 2:09 left and the offense with the ball. Smith was picked off as Lockett was tripped up to seal a loss.

Against the Steelers, the game was tied 20-20 in overtime as Smith was sacked on a third down to end the first drive and then fumbled on a strip-sack that set up the Steelers' winning field goal. Against the Saints, Seattle had the ball with 1:56 left trailing 13-10 and the Seahawks went four-and-out to end their chances.

The Seahawks also fell short this year in losses to the Atlanta Falcons and Saints with chances to win late in the game. While all of those results don't completely fall on Smith's shoulders, the biggest lingering question from Smith's stellar first eight games of the year for Seattle was if he could deliver in the big moments late in games.

A Lockett drop thwarted one drive from being a touchdown, but Smith effectively engineered three second half touchdown drives with the game in the balance.

"He's the real deal," Carroll said. "There's no mystery or 'oh, he's going to run out of gas.' It's not like that. He knows exactly what he's doing and he shows you week in and week out throw after throw after throw. There's nothing for us to hold him in but in the highest of expectations. Really. What a thrilling story for the kid, you know. He just hung in there so tough and outlasted it and now he's enjoying all the fun of it. He did great."

With the game tied at 13-13, Smith completed all five of his passes on a 75-yard touchdown drive capped by Lockett's 33-yard touchdown. The score served as the game-winning points for Seattle.

"I think everyone is just locked in and focused on finishing, and I think that was the same thing last year, it just didn't go our way," Smith said. "But we've got to continue to just stay locked in and focus on those moments, like you said. There's times in the game where you can go and finish the game and you can go and win the game for your team, and as an offense that's what you want. That's what you really want."

Smith has been terrific for Seattle this season. He's completing 72.7 percent of his passes, which is best in the NFL this season through eight weeks. Smith has thrown for 1,924 yards with 13 touchdowns and just three interceptions and has a passer rating of 107.3, which is third-best in the league.

– Tyler Lockett mistakes cost the Seahawks 11 points, but he delivers a redemption.

No matter how good of a career a player has the NFL, one of his games will be the worst of his career. For Tyler Lockett, it seemed as though his would be Sunday's outing against the New York Giants.

Lockett had a fumble inside Seattle's own 5-yard line that quickly turned into the only touchdown of the first half for New York. Then in the third quarter, Lockett dropped a would-be 33-yard touchdown pass from Smith when the ball clanked off his facemask and incomplete.

The two mistakes were effectively 11 lost points for Seattle and the Giants turned the fumble into seven points on the touchdown and the Seahawks had to settle for a 51-yard Jason Myers field goal instead of a touchdown.

"It was just one of those things where you need to be able to fight through adversity," Lockett said. "Sometimes you don’t like the story of how things happen, but if we ever knew what the outcome was going to be, we would be willing to go through that story. I just was able to go through that today."

Lockett also had the ball stripped by Giants cornerback Adoree Jackson just before his backside hit the turf. The fumble was recovered by Jackson and set up a 1-yard Saquon Barkley touchdown that tied the game at 7-7 in the first quarter.

But Lockett answered back on Seattle's next offensive possession after the drop to put the Seahawks back on top. He picked up a 12-yard reception as the Seahawks moved out near midfield. After a 13-yard pickup by DK Metcalf, Lockett roasted Jackson on a stop-and-go for a 33-yard touchdown.

– Bruce Irvin's return to the Seahawks isn't just a swan song, he can still play.

Bruce Irvin isn't on a token farewell tour with the Seahawks, he's showing he can still impact games in a pretty big way in the NFL.

Irvin may have only finished with two tackles on the stat sheet, but he had far more impact than that. He nearly had a sack of Daniel Jones that ultimately resulted in a Cody Barton sack instead. He hip-checked Jones into Barkley to blow up and run in the backfield. And his strong play on the edge of the defense throughout the game helped keep Barkley from running into the clear.

"He looked great today. He was all over the place. Just missed his darn sack right off the bat," Carroll said. "But he's helping us. It's really good to have him here. He connects us with the history somewhat -- and I don't want to make too much of that because these guys don't even know, but he does -- and he knows the mentality and the kind of just the hardness of how we approach stuff. And he is that he always has been."

Irvin has played in two games for Seattle since rejoining the team's practice squad. Irvin started the game for Seattle with fellow linebacker Darrell Taylor ailing with a hip/groin injury. He played a large chunk of Seattle's 64 defensive snaps in the game and would appear to be a lock to move up to the active roster when his three practice squad elevations run out.

"Come back now," safety Quandre Diggs said of Irvin when he texted him to let him know the Seahawks wanted him to come in for a workout.

"We got another guy that can talk trash and kind of get in people's face and let people understand what the standard is around like here."

Irvin has just been one piece of Seattle's defensive improvement over the last three weeks, but he adds an edge and grit to the unit that is clearly a welcome addition to the unit.

The Giants were averaging 173.4 rushing yards per game entering Sunday's contest against the Seahawks. Through five games, the Seahawks were allowing 170 rushing yards a game to opponents. Taysom Hill and Alvin Kamara each rushed for 100 yards as part of 235 yards in total for the Saints in a Week 5 loss.

Struggles to stop opposing rushing attacks were a big reason why the Seahawks had lost to the Falcons and Saints and allowed over 40 points to the Detroit Lions. But since then, the Seahawks defense has rebounded significantly. They allowed just 44 yards to Arizona running backs in a 19-9 win and just 53 yards to the Los Angeles Chargers in total last week.

The Giants were held to their lowest output of the season at 78 yards as Barkley was held to a season-low 53 yards on 20 carries.

"It’s huge," Diggs said. "It always starts up front, our big guys were attacking and doing their thing. JB (Jordyn Brooks), Cody [Barton], Ryan [Neal], and myself we just cleaned it up and fit what we needed in. When those guys are making an impact like that, it’s huge. Saquon is arguably the best running back in the league and he’s been doing great things all year. That’s huge."

The ground game failings were allowing opponents to average over 30 points a game as strong offensive efforts went to waste. But over the last three weeks, Seattle's defense is allowing just 15 points per game. Even in Sunday's win over the Giants, seven of those points came only cause of a turnover that gave New York the ball on the Seattle 2-yard line.

The Giants do one thing well offensively that Seattle's defense had shown to really have issue with earlier this year. They served as a perfect benchmark to see how much that group had truly improved over the last few weeks. The Seahawks passed the exam with flying colors.

"This is the best record I've ever had in my career. I'll be damned if I let this go to waste," defensive end Shelby Harris said.