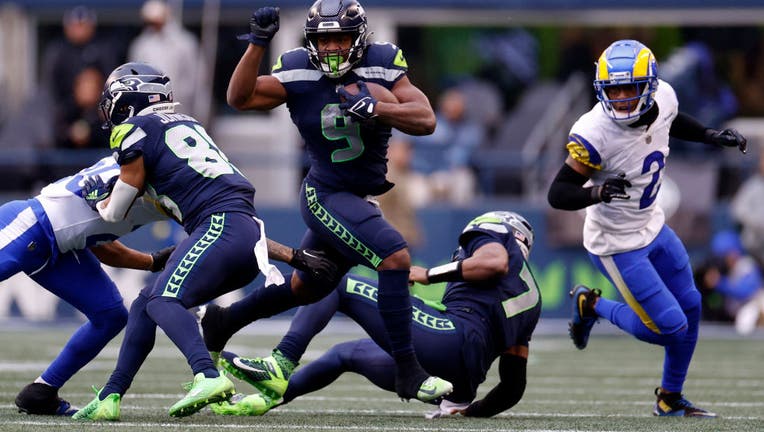 SEATTLE, WASHINGTON - JANUARY 08: Kenneth Walker III #9 of the Seattle Seahawks runs the ball during the third quarter against the Los Angeles Rams at Lumen Field on January 08, 2023 in Seattle, Washington. (Photo by Steph Chambers/Getty Images)

SEATTLE - Pete Carroll, Geno Smith and the Seattle Seahawks are heading to the playoffs.

With a 19-16 win of their own in overtime over the Los Angeles Rams on Sunday afternoon combined with the Detroit Lions 20-16 victory over the Green Bay Packers on Sunday night, the Seahawks earned the 7th seed in the NFC and will play the San Francisco 49ers next weekend.

"I was hoping it could be a party tonight and I hope everybody is enjoying it every way that they can," head coach Pete Carroll said on KING 5 Sunday night after the Lions win. "And we're certainly gonna get right back at work tomorrow and get going here. We're really fired up about it."

The Seahawks were in a similar position at the end of the 2017 season. They needed to beat the Arizona Cardinals at home in the final week of the season and hope the Atlanta Falcons lost or tied against the Carolina Panthers. Seattle didn't hold up their end of the bargain losing their own game 26-24 to the Cardinals. Atlanta beat the Panthers 22-10 to eliminate the Seahawks anyway, but Seattle couldn't beat a 7-8 Cardinals team at home to keep their chances alive.

They nearly repeated that act on Sunday against the Rams as they trailed in the fourth quarter and needed field goals late in regulation and overtime to keep their season alive.

"We did everything we could to make the season last as long as possible," Carroll joked immediately after their victory earlier in the afternoon. "We squeezed every drop out of it."

If the Seahawks had fallen short of the playoffs, it would largely have been due to an 0-4 record against the terrible NFC South that saw all four teams finishing with losing records. A home loss to a 6-11 Las Vegas Raiders team also would have been another regretful moment for Seattle.

Instead, the Seahawks will travel to face the division-rival San Francisco 49ers at 1:30 p.m. PT on Saturday, January 14.

Seattle lost 27-7 to the 49ers in Santa Clara in September and lost 21-13 to San Francisco in Seattle in December.

The season continues onward. For now, here's a look at the takeaways of the season-prolonging victory over the Rams:

Wide receiver Tyler Lockett and running back Ken Walker III each crossed the 1,000-yard plateau for the season with their performances Sunday against the Rams.

Lockett hit the 1,000-yard mark for the fourth straight season, which matches Hall of Famer Steve Largent for the most consecutive 1,000-yard seasons in franchise history. Lockett had four catches for 54 yards against the Rams, including a 36-yard touchdown catch that served as Seattle's only trip into the end zone on the day.

Lockett was honored as the team's Steve Largent Award winner prior to the game, which is given out every year to the player or coach who best exemplifies the spirit, dedication and integrity of the Seahawks as voted on by the players. It's the second straight year Lockett had received the award.

"I wasn't trying to stress if I got 1,000 yards or not," Lockett said. I didn't want my season to be dedicated on whether I got it or not because I felt like I still had had a great season as an individual, even if I didn't get it. And so I mean it's pretty cool how we were able to get it and stuff. And to top it off it was great just to be able to get that win."

Meanwhile, Walker put himself into the offensive rookie of the year discussion in carrying the Seahawks rushing attack the second half of the season. Walker had five separate 100-yard games efforts on the year, including each of the final three games of the season for Seattle. He took over as the starter after Rashaad Penny broke his leg in Week 5 against the New Orleans Saints.

DK Metcalf also finished with 1,000 yards this season after reaching the mark last week. Metcalf and Lockett became just the second tandem in team history to record 1,000-yard receiving seasons when they accomplished the feat in 2020. Brian Blades and Joey Galloway also accomplished the feat in 1995. However, Metcalf and Lockett are the first to do it twice.

– Geno Smith ends season with perhaps his worst outing of the year, but comes up big late.

While the Seahawks finish the season with a victory, the performance of quarterback Geno Smith on Sunday afternoon was not his finest of the season. In fact, Smith even volunteered it was probably his worst of the year for Seattle.

"It was honestly probably one of my worst games, this year," he said.

Smith was intercepted on the first play of the game by Jalen Ramsey. He threw for just 46 yards on 13 attempts in the first half and was nearly intercepted a second time by Quentin Lake before the break.

"That's a tough way to start the game," Smith said. "We've done that twice now. Honestly, it's unacceptable in my eyes. Some things that obviously we can correct, but when it happens, you've got to have a short memory."

Smith said there was a resolve at halftime to rebound and get the job done.

"Regardless of the stats or what was going on, I was in it to win it," Smith said. "I was going out there, I was ready to lay my body on the line, do whatever it took to win. And that was the message I had. We got 30 minutes to go out there and write the story for the rest of our season. And I know every single guy wants to continue to play and so we just stayed locked in and came out with that fight and exactly what we needed at the right time."

Lockett's touchdown capped the opening drive of the second half as Seattle finally shook off their offensive cobwebs. Ramsey would intercept Smith a second time on the next possession as Smith took a blow from Leonard Floyd releasing the ball.

With Seattle trailing 16-13 with 9:35 left to play, the Seahawks caught a break when Michael Dickson was collided with on a punt that gave them a fresh set of downs. Smith delivered a 32-yard strike to Colby Parkinson and a 12-yard completion to Dareke Young to move Seattle into Rams territory. A 9-yard scramble by Smith moved Seattle to the Rams' 4-yard line, but they'd have to settle for a 22-yard field goal as the drive stalled at the 1.

"If it was fourth-and-inches or -one or whatever, we were going. No doubt, we were going. That had been decided. That was the thinking all the way through that," Carroll said.

Smith's 25-yard scramble on the final drive of regulation gave Seattle a chance to win only to have Myers miss a 46-yard field goal. A 17-yard completion to Lockett in overtime helped jumpstart the game-winning drive.

"Team ball. Hard fought. Crowd was rocking. The Rams played their ass off. We had to pull it out. It was ugly. We found a way," Smith said on the field with Laura Okmin of FOX Sports.

Smith broke three of Russell Wilson's single-season club records. His 399 completions and 4,282 yards are new benchmarks for the team. Smith noted himself earlier this week that it's not quite the same with the NFL moving to a 17-game season last year. However, his 69.8 percent completion percentage isn't affected by the extra game and is a strong reflection on his season for Seattle.

"Obviously I'm grateful for the opportunity, grateful for my teammates, all the guys that contributed, all the wideouts, the tight ends, running backs, especially the offensive line. Shane Waldron, one of the best OCs in the game, being able to have Coach Carroll and this type of leadership and this type of ownership, it means a lot. It means a lot," Smith said. "That's really where it's at with me. The accolades, the stats and all that, it's just a part of it, but being a part of this team, being able to play with the guys and go out there on the field and battle, you know, every single week is what's more important to me."

Smith is also just the third different quarterback in team history to throw for 30 touchdowns in a season, joining Russell Wilson and Dave Krieg.