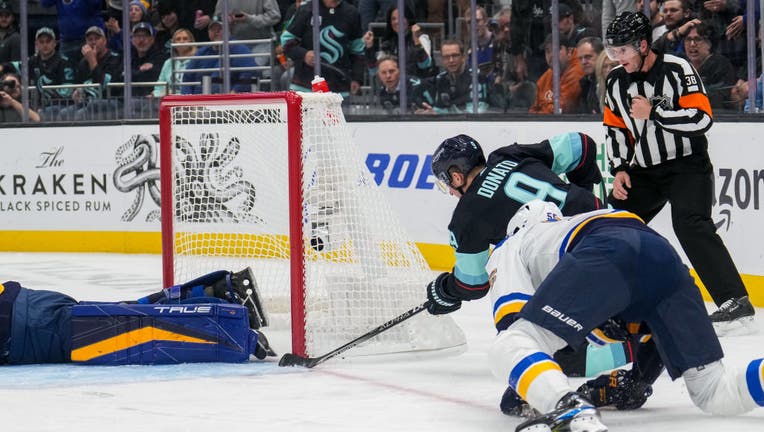 SEATTLE, WA - OCTOBER 19: Ryan Donato #9 of the Seattle Kraken scores a goal during the second period of a game against the St. Louis Blues at Climate Pledge Arena on October 19, 2022 in Seattle, Washington. (Photo by Christopher Mast/NHLI via Getty

SEATTLE - The Seattle Kraken salvaged a point by taking the St. Louis Blues to overtime after falling in an early 3-1 hole, but Justin Faulk's goal in the extra frame sunk the Kraken in a 4-3 loss on Wednesday night.

Justin Schultz whiffed on a clearance attempt from behind the Kraken net. Robert Thomas dug the puck out and fed Vladimir Tarasenko in front of the net, who then dropped the puck back for Faulk. His snap wrister from atop the circles beat Martin Jones to hand Seattle the loss.

Will Borgen, Ryan Donato and Adam Larsson each scored goals for the Kraken. Rookie center Shane Wright picked up his first NHL point for an assist on Donato's goal.

"We gave up a couple quick ones but regained our composure and played a hell of a hockey game," head coach Dave Hakstol said.

Borgen's goal tied the game at 1-1 with just over nine minutes remaining in the first period. Alex Wennberg picked off a pass in the neutral zone that led to a shot attempt from André Burakovsky. Wennberg got the pass back from Oliver Bjorkstrand behind the net and found Borgen for a one-timer that deflected off the shins of Alex Leddy into the net for Seattle.

But the Kraken immediately gave the lead back to St. Louis. Thomas took the puck from Vince Dunn behind the net and fed Tarasenko for a shot attempt. Brayden Shenn hammered in the rebound to put the Blues on top 2-1 just 1:04 after Borgen's goal tied the game. Just 17 seconds later Faulk found open ice on a rush with Schenn finding him in front of the net. Faulk deked Jones to his backhand side to make it 3-1.

Hakstol called their timeout after the Faulk goal to settle things down.

"Take a breath, go play the next shift and let's grind our way back into the game and that's exactly what we did," he said.

Donato scored on a breakaway look in the second to trim the St. Louis lead. Wright deflected a St. Louis pass that bounced off the boards to Brandon Tanev, who fired a pass between defenders to a streaking Donato. Donato went to his backhand but was initially stopped by Blues goalie Jordan Binnington at the post. But Donato hammered at the puck two more times as Binnngton was prone on the ice to get his first goal of the year.

"He didn't score on the initial rush but he's too stubborn to just float by the net," Hakstol said. "He stops on it and he finds a way to jam it into the back of the net."

Wright's assist wasn't recorded initially so he didn't learn of it until it was announced in the arena early in the third period.

"I thought maybe I would have got an assist there, thought I'd touched the puck. Didn't know in the room until they announced it so obviously a pretty cool moment for sure. Definitely really special for me," Wright said.

In addition to his assist, Wright nearly scored his first goal early in the third period. After a Tanev shot deflected behind the net, Donato fed Wright for a quick shot that beat Binnington but hit the left post to stay out.

Wright has played fewer than seven minutes in each of his first three games with limited opportunities on the team's fourth line. But Hakstol was impressed with Wright's play against the Blues and said he needs to get him some more playing time moving foward.

"Getting his first point is awesome. I think that's a great step," he said. "Deserved to score his first goal tonight. That line did everything right on that shift. I've got to get him on the ice for a couple more minutes a night and just continue letting him grow. I liked his game tonight."

Larsson's goal came late in the second period as his shot from the point deflected off the stick of Blues defenseman Torey Krug past Binnington to tie the game at 3-3.

"I just thought we were relentless," Donato said of overcoming the early deficit. "Obviously the other games we put ourselves in a tough spot right off the bat. I think we obviously did a little bit at the beginning too and then we said ‘screw it, let's go and forget about it' and battled back. And I think that was kind of the missing mixture that we were waiting for in the last couple games."

Jones made 24 saves on the night for Seattle with several key stops keeping the Kraken in the game. He made a few big stops on early power play chances for the Blues and a pair of saves in the second period, including a pinwheeling save on Brandon Saad, that kept the game from getting away.

"I felt like that (second) period he matched the guy at the other end and gave us a chance to keep digging out and getting it back to even," Hakstol said of Jones.

After 5-2 and 5-1 losses to the Vegas Golden Knights and Carolina Hurricanes, Hakstol was far more pleased with the effort of the team against St. Louis. The two-minute stretch where they gave up consecutive goals to the Blues being the exception.

"We're not happy. It's disappointing to not come away with two points tonight," Hakstol said. "But in no way will I let our group be disappointed with our effort tonight or the way that they played as a group. That's kind of a baseline standard for us that we should be pushing from and building off of."