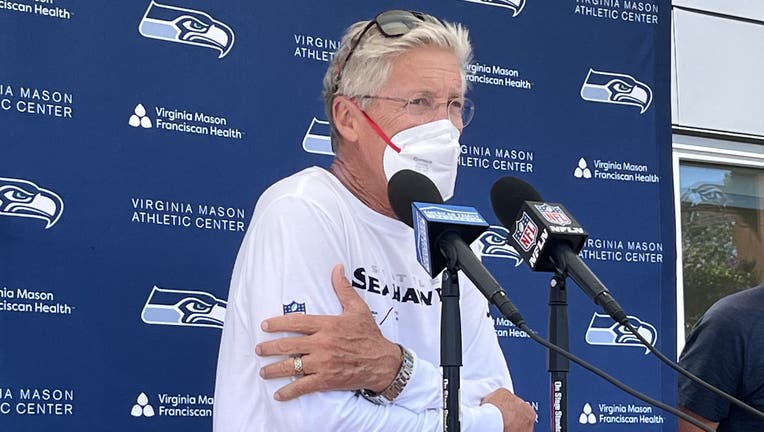 RENTON, Wash. - Seattle Seahawks head coach Pete Carroll was back at the helm at practice on Friday after missing the team's previous three practices due to a positive COVID-19 test last weekend.

Carroll isolated himself from the team for the last five days before returning to the practice field on Friday. Carroll wore a mask through the entirety of practice.

"Really good to be back out here," Carroll said after practice. "I missed the crap out of being out here. It was so much fun today. Practice went way too fast. I'm feeling great, I never did feel really bad. I just had a couple of symptoms that tipped it off and away we went."

Carroll gave the reins of practice to associate head coach Carl Smith, and coordinators Shane Waldron and Clint Hurtt in his absence. Carroll was able to watch practice in real time through live video streamed to him from cameras high above the practice field. He also was able to communicate directly to some assistant coaches on the field as well.

While modern technology gave him the chance to be involved remotely at a substantial level, it's still not something Carroll wants to do again any time soon.

In Carroll's absence, the team had its first two practices in full pads of training camp. They went without pads on Friday with their "mock game" scrimmage coming at Lumen Field on Saturday afternoon.

"We got a big game tomorrow. This is a big deal," Carroll said. "And going to Lumen to play some football is really the best test that we'll have, it'll be the best look at everything. It's kinda like the exam here based on the first couple of weeks of practice. And so the coaches and the players are all looking forward to it."

Carroll said that Geno Smith remains in the lead of the quarterback competition through the first week of camp. Smith has gotten the overwhelming majority of reps behind the No. 1 offensive line so far in camp. Lock did get an early period of work with the first unit line on Friday before Smith returned to the spot for the remainder of the practice.

"The guys are doing a nice job," Carroll said. "We're working hard to match up the reps with the guys that play up in front and the receivers and stuff. We're working to get that done and that'll happen and you'll see how it happens again tomorrow, how the reps are handed out, just so that we can make it a really even competition.

"Geno continues to be on top. He's ahead. He's been in the lead for all the obvious reasons and he's holding on to it and doing a really good job of battling. Both guys are communicating beautifully. They're learning well. We don't have any issues with anything we're trying to do."

Dublanko, an Aberdeen, Wash, native, played college football alongside cornerback Coby Bryant at the University of Cincinnati. He went undrafted earlier this spring.

– Cornerback Tre Brown, linebacker Jon Rhattigan and tackle Liam Ryan remain on the physically unable to perform list. Brown is closing in on a return to the field after a patella tendon injury sustained last November. However, he's still not ready yet to get back on the field.

Brooks has minor hamstring tightness. Smith had the hip injury that forced him to begin camp on the PUP list get sore as well.

Ugo Amadi returned to practice after missing a few days of action.

Wide receiver Dee Eskridge has been doing early work in practice throughout the work, but not taking part in any drills. Carroll said that Eskridge is close to getting back from a tight hamstring issue, though he may not make it in time to play in the preseason opener against the Pittsburgh Steelers next Saturday.