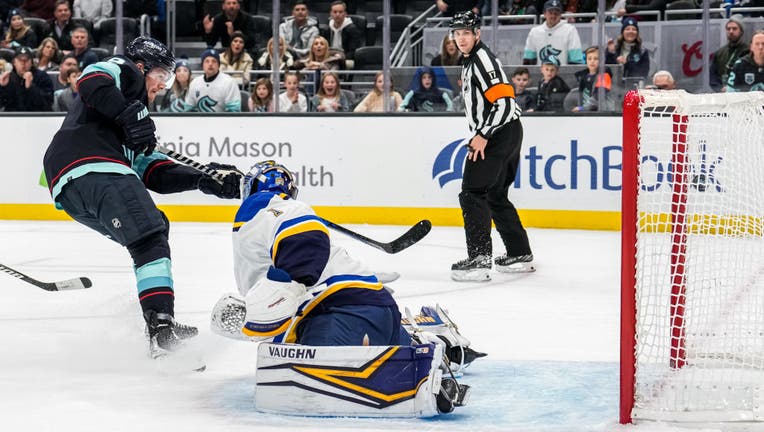 SEATTLE, WASHINGTON - DECEMBER 20: Ryan Donato #9 of the Seattle Kraken scores a goal past Thomas Greiss #1 of the St. Louis Blues during the first period of a game at Climate Pledge Arena on December 20, 2022 in Seattle, Washington. (Photo by Christ

SEATTLE - Ryan Donato scored on a breakaway chance for his fourth goal in as many games and the Seattle Kraken rolled to a 5-2 victory over the St. Louis Blues on Tuesday night.

Donato took a beautiful stretch pass from Adam Larsson through the Blues defense and deked St. Louis goaltender Thomas Greiss for the opening goal of the night.

"You kind of pray for those opportunities," Donato said. 'They don't come around very often. And when you do, you'll be kicking yourself if you don't capitalize on them. When you get as good a pass from Lars, you definitely want to try and capitalize to the best of your abilities."

It extended Donato's goal scoring streak to four straight games, which is a new career-high.

"I mean, for me, it definitely is sweet," Donato said. I think It's exciting. But honestly at the end of the day, I think everybody in here can agree that it's more about winning. So for me to be a part of that win is definitely a good feeling."

Carson Soucy, Daniel Sprong and Jared McCann all scored for Seattle in the second period with Sprong beating Greiss on a similar breakaway chance. Brandon Tanev added an empty net goal. Martin Jones made 22 saves on 24 shots in net for Seattle.

"It's a great win. There's a lot of pieces that we like out of this hockey game. There's also going to be some things that we have to clean up as we go into Vancouver in two nights," head coach Dave Hakstol said.

The Kraken fully took advantage of a Blues team that was a bit sluggish after playing last night as well against the Vancouver Canucks. The Blues beat Vancouver 5-1 on Monday night. However, Jordan Kyrou – who had a hat trick in the victory for St. Louis – didn't play against Seattle due to an upper body injury. Starting goaltender Jordan Binnington also played last night in Vancouver, which gave the Seattle duties to Greiss.

Larsson's pass was delivered perfectly from deep in Seattle's own zone to a streaking Donato on the opposite blue line as he cleanly juked Greiss to give the Kraken a 1-0 lead.

"That was a spectacular pass from him," Donato said. "I mean, I saw it coming a little bit but him going backwards with his momentum carrying him that way, to be able to get it all the way across the body and up that far, that was awesome and as I'm going on a breakaway, I just kind of closed my eyes and hope for the best."

Coming out of a power play chance in the second period, the Kraken were peppering chances on the St. Louis net. A Will Borgen shot deflected off the stick of Ryan O'Reilly and Soucy chipped the puck behind Greiss with a one-handed effort to extend the lead to 2-0.

Morgan Geekie then found Sprong on another stretch pass to the blue line as Sprong got behind the defense and beat Greiss to the glove side. Just over two minutes later, McCann tossed a puck from behind the end line off Greiss and into the net to make it a 4-0 game at the end of the second period.

McCann's goal is his 15th of the season, which leads the team.

"The first few periods we were pretty good," Hakstol said. "We did what we had to do in terms of overall pace of play, energy. We had a lot of good opportunities in the second period."

Tanev created a short-handed breakaway chance early in the third period only to be taken down from behind by Brandon Saad for a penalty shot chance. Greiss made a pad save to keep the Kraken from further extending the lead. The Kraken are now 0-2 all-time on penalty shots as McCann was unsuccessful beating Marc-Andre Fleury last year againstthe Chicago Blackhawks.

Colton Parayko – who coincidentally converted a penalty shot in Seattle last year – broke up the Kraken shutout bid six minutes into the third period. Parayko was left unmarked and beat Jones stick side to make it a 4-1 game.

The Blues then converted a power play chance after a McCann tripping penalty against Justin Faulk. Pavel Buchnevich beat Jones with just a second left on the penalty to cut the lead to 4-2 with 9:01 left to play.

"We were too loose during a couple of the stretches in the third period," Hakstol said.

With an offensive zone face-off with 4:24 left to play, Blues head coach Craig Berube pulled Greiss as St. Louis hoped to claw even closer. However, Alex Wennberg won the face-off for Seattle and Tanev poked the puck away from Blues defenseman Torey Krug to create a breakaway empty net goal as the final dagger for Seattle in the win.

The Kraken (18-10-3, 39 pts) travel to face the Canucks (13-15-3, 29 pts) on Thursday night before a brief holiday break in the NHL. They then host the Calgary Flames, Edmonton Oilers and New York Islanders back in Seattle next week prior to a season-long seven game road trip to the East Coast.