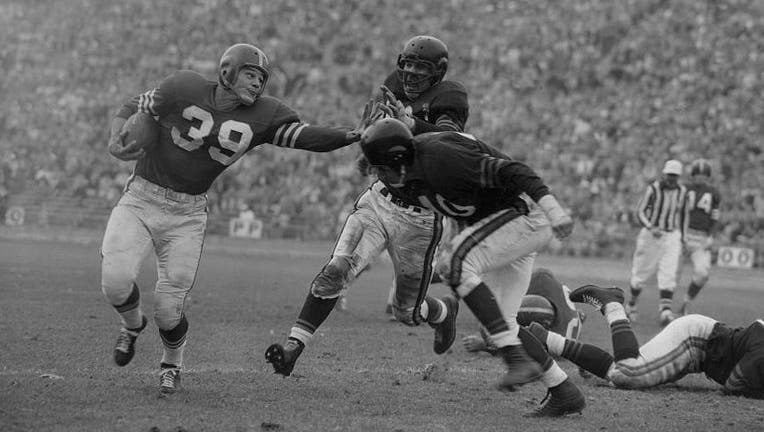 (Original Caption) Hugh McElhenny, San Francisco 49er halfback and leading ground-gainer in the National Football League, suffered a complete shoulder separation when tackled in the fourth quarter in the game with the Chicago Bears in San Francisco.

Hugh McElhenny, a Pro Football Hall of Famer and one of the greatest players in Washington Huskies history, has died at the age of 93.

The Pro Football Hall of Fame released a statement on Thursday on McElhenny's passing last week of natural causes at his home in Nevada.

McElhenny, nicknamed "The King," was a California state champion in the hurdles and long jump and became a highly-touted football recruit. After a season at Compton Junior College, McElhenny enrolled at the University of Washington. McElhenny told The Athletic in 2020 the Huskies offered him the best incentives.

"I had so many choices. I wanted to go to USC or UCLA and stay in Los Angeles, but the University of Washington came up with a package for me to be able to marry my wife, Peggy, so I took their offer," McElhenny said.

He also has the longest punt return touchdown in school history with a 100-yard return against USC in 1951.

Despite playing more games now than in the 1950's, McElhenny's 1,107 rushing yards in 1950 remains 17th all-time at Washington. His 2,499 career rushing yards are still ninth. He's ninth all-time in scoring with Myles Gaskin being the only non-kicker ahead of him on the list. And McElhenny even did that, converting 23 extra point attempts in his career.

McElhenny was selected ninth overall by the San Francisco 49ers in the first round of the 1952 NFL Draft. The 49ers had attempted to sign McElhenny straight out of high school before he attended Compton Junior College. He became a first-team All-Pro and was named Rookie of the Year in his first season with the 49ers, He recorded the longest run from scrimmage (89 yards), the longest punt return (94 yards), most all-purpose yards (1,731) and most yards per carry (7.0) in the NFL his debut season and would land on five All-Pro teams during his nine seasons with the 49ers.

McElhenny teams up with Y.A. Tittle at quarterback, and Joe "The Jet" Perry and John Henry Johnson at running back to form the "Million Dollar Backfield." All four would eventually enter the Pro Football Hall of Fame with McElhenny being inducted in the class of 1970.

McElhenny made his final Pro Bowl appearance in 1961 with the Minnesota Vikings after being selected in the expansion draft. He would play two seasons with the Vikings, and one each with the New York Giants and Detroit Lions to cap his career.

McElhenny's NFL career finished with 5,281 rushing yards, 38 rushing touchdowns, 264 receptions, 3,247 receiving yards and 20 receiving touchdowns. His 11,375 all-purpose yards were the third-most in NFL history at the time of his retirement.

McElhenny became part of a group that attempted to bring the NFL to Seattle in the 1970's. Ultimately, the franchise was awarded to a group headed by Lloyd W. Nordstrom.