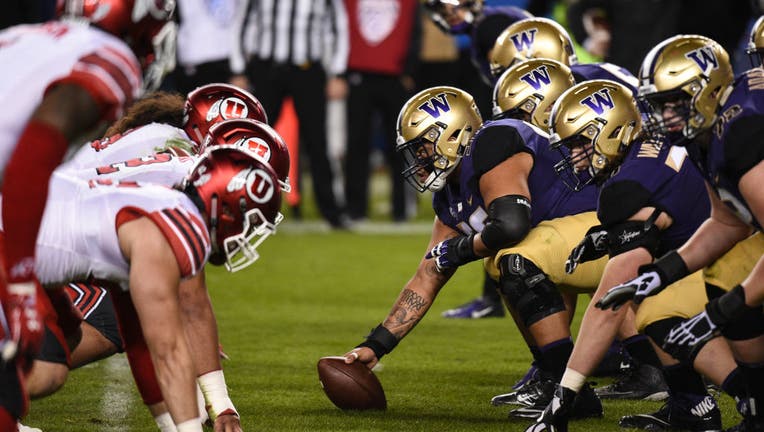 SANTA CLARA, CA - NOVEMBER 30: Washington Huskies line up on offense against the Utah Utes defense during the Pac-12 Championship Game on November 30, 2018 at Levi's Stadium in Santa Clara, California. (Photo by Cody Glenn/Icon Sportswire via Getty I

Immediately on the heels of a rule change from the NCAA, the Pac-12 Conference has elected to change which teams will participate in its football championship game.

"Our goal is to place our two best teams in our Pac-12 Football Championship Game, which we believe will provide our conference with the best opportunity to optimize (College Football Playoff) invitations and ultimately win national championships," Pac-12 Commissioner George Kliavkoff said in a statement. "Today’s decision is an important step towards that goal and immediately increases both fan interest in, and the media value of, our Football Championship Game."

The NCAA had previously required that participants in a championship game were the winners of divisions. The Pac-12 had split into North and South divisions with the winners of each division making the title game. The NCAA removed that requirement on Wednesday with the Pac-12 immediately announcing they had unanimous support from the league's head football coaches, athletic directors and board of directors to make the change.

The championship game would have had different participants in 2011, 2012, 2015, 2018 and 2020 had the league been able to put its two best teams in the title game. It also would have resulted in an Apple Cup rematch between Washington and Washington State in 2018.

– * The Huskies did not play in the title game due to a lack of available players due to COVID-19 protocols.

The move to nix divisions was made with the intention of trying to better the Pac-12's chances of making the College Football Playoff. A Pac-12 team has only made the four-team field twice in eight years. The Washington Huskies were the last to do so in 2016-17.

The conference hasn't particularly come close in recent years either. Only two championship game participants in the last five years was ranked in the top 10 for the title game. Utah was ranked No. 5 in 2019 only to lose 37-15 to No. 13 Oregon. The roles were reversed last year with No. 17 Utah beating No. 10 Oregon 38-10.

The schedule will remain the same for 2022 despite the change. The schedule was designed around divisional scheduling parameters. However, the Pac-12 said scheduling for 2023 and beyond will be under review.