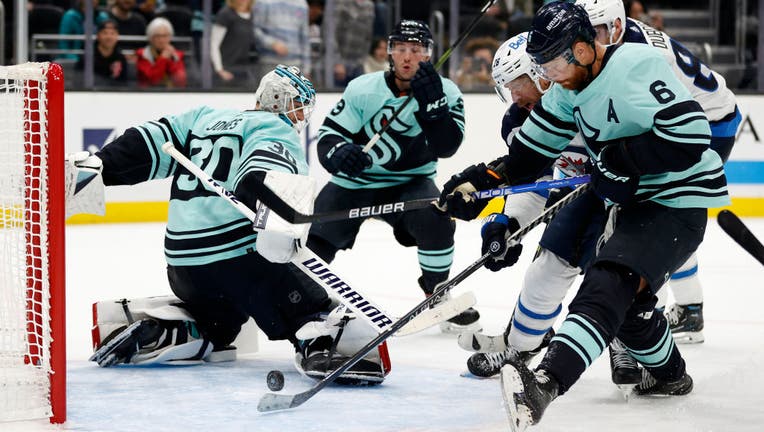 SEATTLE, WASHINGTON - NOVEMBER 13: Blake Wheeler #26 of the Winnipeg Jets scores the tying goal against the Seattle Kraken during the third period at Climate Pledge Arena on November 13, 2022 in Seattle, Washington. (Photo by Steph Chambers/Getty Ima

SEATTLE - Blake Wheeler scored the game-tying goal with 3.9 seconds left to play and Mark Scheifele scored the game-winner in overtime as the Seattle Kraken saw a victory slip through their fingers in a 3-2 loss to the Winnipeg Jets on Sunday evening.

Carson Soucy took a bad roughing penalty with 26 seconds left to play that was the eighth penalty of the night for Seattle. It proved the most costly for Seattle as the Jets turned a six-on-four advantage with an empty net at the other end of the ice into Wheeler's backhanded goal with just seconds left in regulation.

Then in overtime, André Burakovsky tried to split two defenders and turned the puck over. It resulted in a two-on-one break the other way with Josh Morrissey finding Scheifele for a wide open chance that he buried behind Martin Jones to sink the Kraken.

"We've gotta stay out of the box more and turned too many pucks over. A point is probably what we deserved tonight," said Jones, who was stellar in saving 29 of 31 shots on the night.

Soucy was jostling with Jets forward Pierre-Luc Dubois for much of the final minute. Soucy cross-checked Dubois in the back with 45 seconds left. Dubois returned the favor 10 seconds later. Soucy slashed the back of Dubois' skate and Dubois, again, responded in kind. But then when Dubois gave Soucy one last hip check, Soucy punched Dubois in the back of the helmet to draw the penalty.

"My focus is 30 seconds to go," head coach Dave Hakstol said. "We just need to close that game out. We don't need to settle any scores at that point in time."

The referees blew the whistle with the Jets in possession of the puck, which was confusing to Hakstol when only Soucy was sent to the penalty box. Play typically continues until the offending team gains possession.

"It's an undisciplined penalty on our part. So that's the piece that we can fix. The rest of it, I am a little confused at how that whole sequence happened and why the play was blown down when it was if both guys weren't going to the box," Hakstol said.

It had otherwise been a strong bounce-back performance by Seattle after a 1-0 loss to the Minnesota Wild on Friday night.

Jordan Eberle scored a power play goal in the first period and Brandon Tanev delivered the tiebreaking goal in the third that put Seattle within reach of another victory. Then three penalties in third period proved too much to overcome as a Jaden Schwartz tripping, Eberle hooking and Soucy roughing couldn't all be killed off.

"Yeah, that stings. Penalties, myself included, just not understanding the situation and that hurts," Eberle said. When you have the game and, obviously, Jonesy is playing well back there and you just keep giving them opportunities. Yeah, that hurts. Those are ones that are tough to get over."

The Kraken took their first penalty just 43 seconds into the game for too many men on the ice in what became a sign of things to come.

Winnipeg didn't get a shot on net during the power play with a trio of shots blocked in front of the net and one chance from Adam Lowry sailing wide.

A slashing penalty on Saku Mäenalanen and a hooking penalty on Blake Wheeler gave Seattle a 5-on-3 power play chance they used to take a 1-0 lead. Eberle slammed a rebound of a Vince Dunn shot between the legs of Jets goalie David Rittich to give the Kraken the advantage.

Winnipeg fought back – literally and figuratively – in the second period.

A massive scrum between the two teams broke out with 8:23 left in the period. Burakovsky and Lowry initially got into a bit of shoving match with Brendan Dillon later getting in Burakovsky's face. After Burakovsky shoved Dillon with his stick, the tempers flared further with Wheeler jumping in and throwing punches at Burakovsky. Will Borgen took up the effort for Seattle going at Wheeler with a trio of penalties ensuing from the fray.

Borgen and Dillon each got two-minute penalties for roughing and Wheeler took a four-minute roughing penalty that gave Seattle a four-minute power play chance. However, the Kraken were unable to convert the advantage into their second goal.

The Jets out-shot the Kraken by a 16-6 margin the frame and found an equalizer on a power play goal from Mark Scheifele after an interference penalty from Soucy against former Kraken forward Mason Appleton. The goal snapped a streak of 18 consecutive penalty kills for Seattle dating back to their Oct. 29 victory over the Pittsburgh Penguins.

Oliver Bjorkstrand and Jared McCann each had shots ring off the post and Tanev got a breakaway chance short-handed as he beat Rittich only to backhand the puck off the crossbar and out as Seattle couldn't convert several chances into goals.

Tanev finally broke the deadlock with 12:58 left to play. He corralled a bouncing puck across the blue line and fired a wrist shot that beat Rittich to make it a 2-1 game.

Seattle survived Eberle's penalty before Rittich headed for the bench with 1:25 left to play. Bogen made a strong defensive challenge and blocked a Wheeler shot as Seattle inched toward victory. Jones kept making saves and the Kraken defense fought to clear the puck from in front of net only to have Soucy's penalty give Winnipeg another advantage.

"Boy we wasted a good performance there," Hakstol said of Jones. "His performance was good enough to get two points. We'll have to unpackage and take on our part of things, given up the tying goal with a few seconds to go on a bad penalty."

Wheeler redirected a rebound from Kyle Connor behind Jones to bring the game level and send it to overtime.

"Those are the (games) that really sting. You never know what point is going to get you into the playoffs and when you make mistakes and keep giving good teams like that opportunities, that's what's going to happen."