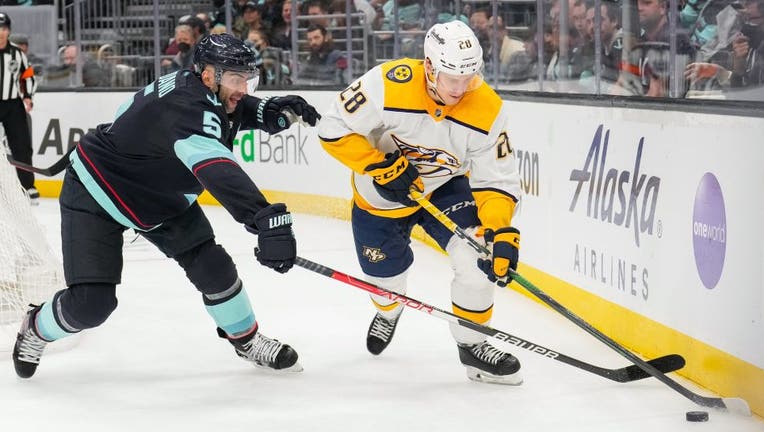 SEATTLE, WASHINGTON - MARCH 02: Mark Giordano #5 of the Seattle Kraken and Eeli Tolvanen #28 of the Nashville Predators battle for the puck during the second period at Climate Pledge Arena on March 02, 2022 in Seattle, Washington. (Photo by Christoph

The Seattle Kraken have claimed forward Eeli Tolvanen off waivers from the Nashville Predators and recalled defenseman Gustav Olofsson from AHL Coachella Valley.

Additionally, forward Karson Kuhlman was placed on waivers to open up a roster spot for Tolvanen's addition.

Tolvanen – a first-round pick of the Predators in 2017 – had fallen out of the rotation with the Predators as he was a healthy scratch for Nashville's last nine consecutive games before being placed on waivers on Sunday. Tolvanen has two goals and two assists in 13 games played for the Predators this season, but three of his four points came in the first three games of the year with only one point since on a goal against the Colorado Avalanche on Nov. 10.

Tolvanen had 54 points on 30 goals and 24 assists in 52 games played for the Sioux City Muskateers of the USHL before being taken with the 30th pick by Nashville in 2017. His offensive skill and strong shot were among the traits that made him a first-round selection.

Tolvanen will give Seattle another forward option to use in their bottom six and could split time with Ryan Donato. Jaden Schwartz continues to manage an upper body injury and missed Thursday's game in Washington due to the issue. That concern could give Tolvanen opportunities to see action as well.

Olofsson played in one game for Seattle earlier this season against the Winnipeg Jets and provides needed depth on defense with Jamie Oleksiak out another two games due to suspension and Justin Schultz injured late in Sunday's win over the Florida Panthers.

Olofsson, a left-shot defenseman, will likely take Oleksiak's spot in the lineup with Cale Fleury, a right-shot option, drawing into the lineup for Schultz if he's unable to play against the Tampa Bay Lightning on Tuesday. If Schultz can play, head coach Dave Hakstol will have a choice between Fleury and Olofsson as to who takes Oleksiak's spot.

Schultz left Sunday's game in the third period after Panthers forward Ryan Lomberg hammered him into the glass for a five-minute major penalty and a game misconduct disqualification.

Oleksiak was suspended a total of three games for an illegal check to the head of Washington's Alexander Alexeyev on Thursday night.

Kuhlman has appeared in 39 games for Seattle over the last two seasons after arriving via a waiver claim from the Boston Bruins last January. Kuhlman had 11 points on three goals and eight assists during his time with the Kraken. He played in 14 games this year for Seattle with a goal and two assists.