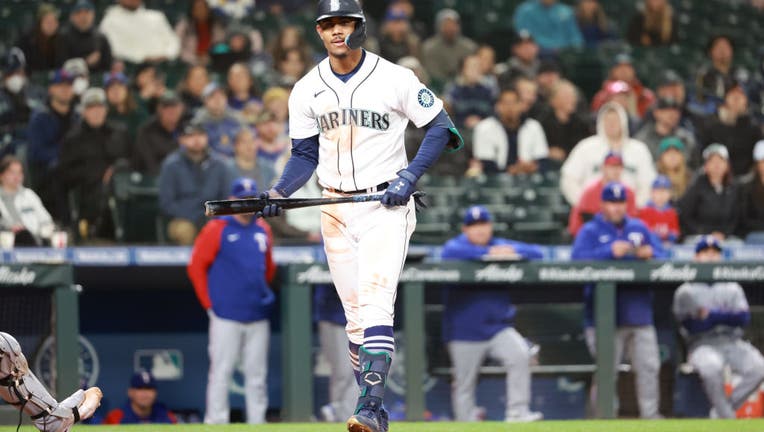 SEATTLE, WASHINGTON - APRIL 19: Julio Rodriguez #44 of the Seattle Mariners reacts while at bat against the Texas Rangers during the eighth inning at T-Mobile Park on April 19, 2022 in Seattle, Washington. (Photo by Abbie Parr/Getty Images)

SEATTLE - Julio Rodríguez may only be 21-years old, but his level of maturity as he deals with a barrage of strikeouts in his first two weeks in the big leagues is impressive.

Through 12 games played for the Seattle Mariners, Rodríguez has struck out 22 times. That's tied with Dansby Swanson of the Atlanta Braves for most in the major leagues so far this season, though Rodríguez has reached the mark in two fewer games played.

Of those 22 strikeouts, 13 have been on called third strikes. Of those 13, eight of them were on pitches out of the zone that were still called strikes. It could be that umpires aren't giving Rodríguez the benefit of the doubt. It could be that they're actively squeezing him as a rookie as well.

It would be understandable if Rodríguez was to get angry and frustrated with the calls going against him. He has faith in his knowledge of what the strike zone is and is still getting wrung up on pitches he knows aren't strikes.

Instead, Rodríguez is doubling down on his approach.

"Whenever it's a ball and they call it, I know 100 percent that it's a ball," Rodríguez said. Like, I got up to the plate a little more now. I thought it was me that I was seeing it too far or something, but I got up a little bit to the play and they're still calling it off the plate. So I gotta keep wearing it, I guess. I don't know what I gotta do for them."

Rodríguez is coming off a four strikeout night from Thursday's 8-6 loss to the Texas Rangers. His last strikeout of the night came watching strike three on a pitch from Matt Bush that was outside the zone low and away. It was still called a strike by home plate umpire Carlos Torres.

When asked how he kept from getting angry in such moments, Rodríguez chuckled and shook his head.

"After they (call) it, there’s nothing I can do," Rodríguez said.

Rodríguez has struck out at least three times in four of the 12 games he's played for the Mariners. An argument could be made that Rodríguez should be open to swinging at pitches that are close to the strike zone, at least in a two-strike count in order to "protect the plate." However, Rodríguez says he isn't going to start chasing balls in hopes of finding results.

"I'm not going to be chasing that because I've never done that," he said. "So I'm staying true to myself and I’m still getting those calls. So I'm just going to stay true to myself. As I said, again, God is watching and what goes around, comes around.

"I feel really good because if you've been seeing it where those pitches are located even if I put the best swing I can possibly do to that, maybe like a ground ball is the best thing I can get out of that."

The Mariners have the same opinion. When they analyze Rodríguez's swing decisions and look at the pitches he is, and isn't, swinging at, it shows he's making the right decisions. The results just haven't followed.

"You can't go out there trying to chase the result because then you start chasing pitches," acting manager Kristopher Negrón said. "You've got to kind of stick with your process. It's what we preach here and he's been doing a great job of that. Long-term, that's going to be your best way to succeed is kind of sticking on the things you can control. If Julio starts chasing those results, that's when things are going to go south."

Negrón said that Rodríguez's decisions in the game against Texas were solid.

After the four strikeouts, Rodríguez ripped a liner off Joe Barlow with one out in the ninth only for Rangers' center fielder Adolis Garcia to snag it out of the air with a terrific diving catch. Even with that, all Rodríguez could do was smile.

"He’s my friend but I’m going to block his number," Rodríguez said laughing. "I don’t want to talk to him for a few days."

Ultimately, Rodríguez believes calls will start evening out and his discipline and approach will pay off.