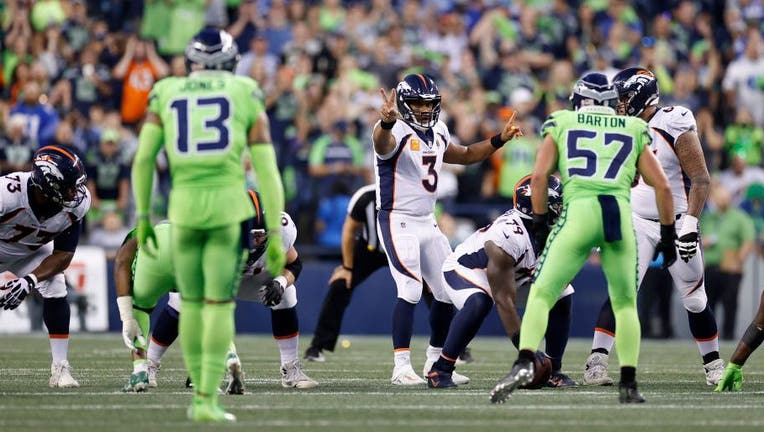 SEATTLE, WASHINGTON - SEPTEMBER 12: Russell Wilson #3 of the Denver Broncos prepares for a snap against the Seattle Seahawks as Cody Barton #57 and Josh Jones #13 line up in defense during the fourth quarter at Lumen Field on September 12, 2022 in Se

RENTON, Wash. - Josh Jones had a contract offer on the table from the Seattle Seahawks this spring but didn't know if he wanted to take it.

Jones, a former second-round pick of the Green Bay Packers in 2017, had not seen his career develop as he expected. He'd been with five different teams in five years and made three different stops last season alone. He was getting tired of putting in the effort and work and not seeing anything tangible come from it.

With three kids at home in Atlanta and Seattle a five-hour flight away, Jones was struggling to find the motivation to keep going. But a pair of conversations with Seahawks head coach Pete Carroll helped convince him to give it another go.

"To be honest, man, the reason why I'm here is because of Pete," Jones said. I wanted to sign back, man, but I was tired of going through what I was going through in the league."

Carroll's phone call helped serve as the push Jones needed to give the Seahawks another shot after finishing last season on the team's practice squad.

"I understood that nothing was gonna be given to me, nothing has ever been given to me in my life," Jones said. "And I knew I had to work for it. And Pete told me that you're going to have to earn it. I earned my way on his team, man, and I earned everything that I got."

After two years starting in Green Bay, the team released him in 2019. Jones had skipped offseason workouts in a dispute with the team over playing time. He'd also developed a thyroid condition that kept him from getting on the field in training camp as well.

"I feel like that's the best thing you can do in life is be transparent. And I had to mature, you know, from the neck up," Jones said of his time with the Packers. "I had to look myself in the mirror and just change some things. And when you want to point the finger, just not point the finger."

After year with the Jacksonville Jaguars, the team cut him at the end of training camp last year. With teams already having their rosters set for the season, Jones struggled to find opportunities. He signed with the practice squad of the Indianapolis Colts and played in six games before being released again. He then made his may to Seattle for another practice squad opportunity only.

"I just felt like last year, like last offseason when I signed back with Jacksonville, like the opportunity I had, kind of felt like they kind of pulled the rug up under me," Jones said. "And then I end up pulling my hamstring like the last preseason game and then I went like a few weeks going unsigned and I was just tired.

"I was like, man, I'm going into a year, teams are already set. I'm not going to get an opportunity to compete. So all of those things like that just kept playing in my head. I was telling myself like, 'man if I can just get a fair opportunity.' Pete is a fair guy. He's gonna call a spade a spade, and he's going to let guys compete and let the chips fall where they may."

Jones signed to Seattle's practice squad in December and ended up starting the final game of the season last year against the Arizona Cardinals. Jones said he said hello to Carroll in the hotel lobby the night before the game and Carroll grabbed him to have a chat.

"We sat down the night before the game, and we mapped out this future because he looked like he should be a part of what we are doing," Carroll said of the conversation. "He hadn’t had much success up until then, and I don’t think he really believed what I was telling him because I was selling him that he was going to be a big part of what was going on. He was hesitant to accept that."

Jones appreciated Carroll taking the time to get to know him more and it made an impression on him.

"Since that talk, man, everything has just been a lot different in my life," he said.

"Nobody has ever like took the time out, especially a head coach, has ever took the time off to really, truly understand me. And for me to be transparent with him, you know, he listened and he took it from his perspective. And he understood you know, where I was coming from as well.

Jones played well in the game against Arizona. He recorded 10 tackles and had a pass defended in his 52 snaps at safety. It helped solidify Seattle's desire to bring him back to the team this spring. But Jones again had doubts about what it would mean for him. His third child, Carter, was weeks away from being born and he was questioning if it would be worth it to give it another chance with Seattle so far away from home.

"I was kind of just being like, man, you know what I need to be closer to my family. This is pretty far. All of those things going through my head," Jones said. "I'm just like, man, you know what? I'm just tired of everything and man, my career hasn't gone how I want it to go and like and I might be done, man. And you know, when Pete called me on that Saturday. He was like 'what's going on with you?'

"And it was crazy because before that, I had talked to my brother and I was like 'man, if I don't get a sign, I'm done. I'm done with it.' And that was the sign right there. I literally caught him right after that and I told him Pete called me and he was like 'there's your sign bro right there.' So here I am."

Jones re-signed with Seattle in early May and became a constant presence for the defense throughout training camp. He had already earned a spot in the team's three-safety packages for when Jamal Adams would move down to the linebacker level by the end of the preseason.

"I’ve been really pleased with Josh Jones," Carroll said. "Josh has done nothing but positive stuff since the day he got here. Since then, he’s taken the next step and then the next step. Coming into this camp, he came back and had a great camp. He had the most turnovers and he had the most big plays and big hits of all of the guys. You saw him in the rotations already, he was already part of the plan. Now, he just takes a bigger step forward."

Now with Adams out for the rest of the season due to a torn quadriceps tendon, Jones is set to start for the Seahawks alongside Quandre Diggs in Seattle's secondary.

"Just grateful that I didn't just pull the plug on myself and just call it quits, man," Jones said. "I'm thankful for that. I'm thankful for this team just believing in me. And not even the coaches, just the teammates and just coming in this building. It's different. It's totally different from different places that I've been."

One of the most critical plays of Monday night's 17-16 win over the Denver Broncos was a stop by linebacker Cody Barton on running back Javonte Williams on a screen pass on the final drive of the game. Barton stopped Williams for a 4-yard loss that put Denver in long yardage downs ahead of the missed 64-yard field goal try from Brandon McManus.

As it turns out, the Seahawks didn't run the play their defensive coordinator had intended to call.

Linebacker Jordyn Brooks said on Thursday that he was unable to hear the play-call from the sidelines with the noise generated by the fans on Denver's final drive.

"We were actually supposed to call a blitz there and I think if we would have called that blitz, we would be in misery right now," Brooks said. "They had a lot of yards to go. Luckily, I didn’t hear it and we got another call called. Cody made a great play and saved it for us."

A well-executed screen pass against a blitz could have been a back-breaker for Seattle. Instead, Barton made a great read on the screen pass and blew it up for a loss.