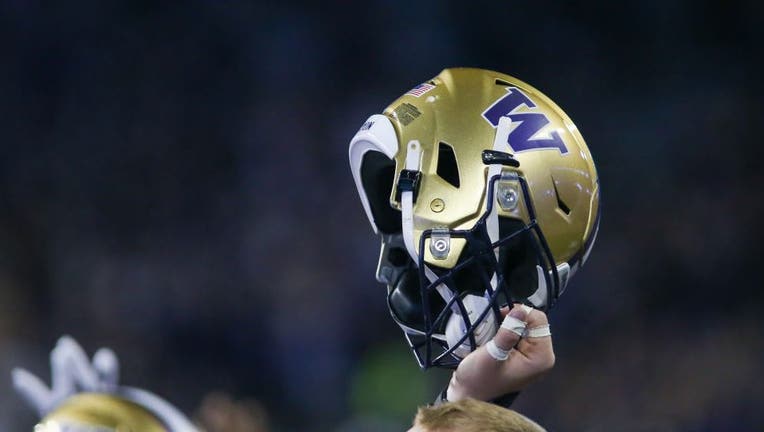 SEATTLE, WA - SEPTEMBER 25: Washington Huskies helmet during a college football game between the California Golden Bears and the Washington Huskies on September 25, 2021, at Husky Stadium in Seattle, WA. (Photo by Jacob Snow/Icon Sportswire via Getty

"Michael is going to be our starting quarterback," DeBoer announced on Tuesday. "He's just had a really great camp and he's been consistent from the time spring ball started to where he's at now. He's done a great job earning it. Excited for him to get those extra reps now, build that chemistry with the group and now can take that next level of leadership.

"The other thing I really want to make sure I say is that the Husky Nation all knows (Morris) and Sam and have seen them play. I can tell you that these two guys are different quarterbacks than what they've known. … Those two guys are more than ready to play, but you go with who is going to lead you up and down the field and who gives you the best chance to win a football game. And that's Michael."

Penix – a transfer from Indiana that played for DeBoer when he was the offensive coordinator of the Hoosiers in 2018 – earned the starting job over incumbent starter Morris and Huard, the son of former Huskies quarterback Damon Huard.

DeBoer said that Morris would be the backup if they were playing a game today, but that Huard "is right there."

Penix has the background of working with DeBoer before in their previous time together at Indiana. He's started 20 games over four seasons with the Hoosiers and brings a wealth of experience to the position. However, he's also had multiple injuries throughout his career, including two ACL tears, a AC joint sprain in his shoulder, and a sternoclavicular joint injury. If he can't stay healthy, that would open up opportunities for Morris or Huard.

"This is about Michael just being the guy that we know can lead the charge and get it done for us," DeBoer said. "The other guys didn't do anything wrong, they're competing their tails off. But with the snaps that Dylan has played over his career and where he's at he's just a little ahead of Sam. Sam's made a hard change since really the spring game, since practice 15. He started feeling it a little bit then and had an awesome summer. He's been hard-charging all fall and it's hard for all these guys because they've all poured so much into it. But they're going to be great teammates just because they're great people."

Morris started 15 games over the last two seasons for Washington, throwing for 3,355 yards with 18 touchdowns and 15 interceptions.

Huard appeared in four games last year for the Huskies with a lone start in the Apple Cup against Washington State. Huard completed 17-of-31 passes for 190 yards with a touchdown and four interceptions in the 40-13 loss to the Cougars.

DeBoer explained what it is about Penix that makes him confident in what he brings to the position.

"(Michael)'s a big guy, stands in there. In my experience is he'll stand right in the pocket and make those throws that he needs to make when people are bearing down on him and you've got to get rid of the ball and you're holding on to it one second longer while, routes are opening up and converting. He converted today on some stuff when the picket collapsed on him a little bit and he's got that arm talent. He can throw from different slots and different movements. He's been consistent. He's taken care of the football. That's how I know him.

"I know there's been a season where he had a few more interceptions and stuff, but I know him as a guy who takes extremely good care of the football. That's what he did for me and that's what he's done ever since he's been here this spring and the fall. But his arm talent, whether it's the deep ball or throwing it from one side, one hash all the way to the opposite sideline, quick out routes or corner routes. He can throw the ball vertical. He gets rid of it quick, so our play-action pass, as well as our RPOs, he can read things and get rid of it quick. That allows us to open up pretty much the entire offense for him."