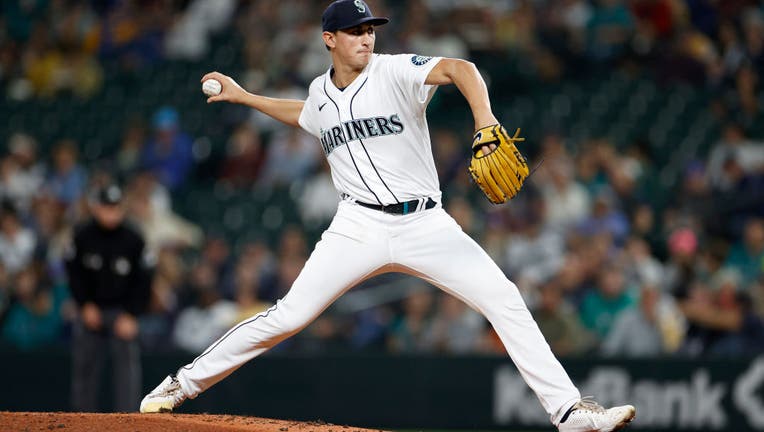 SEATTLE, WASHINGTON - SEPTEMBER 28: George Kirby #68 of the Seattle Mariners pitches during the second inning against the Texas Rangers at T-Mobile Park on September 28, 2022 in Seattle, Washington. (Photo by Steph Chambers/Getty Images)

SEATTLE - Eugenio Suárez delivered three hits and a walk and George Kirby allowed just one run over six innings of work as the Seattle Mariners beat the Texas Rangers 3-1 to inch closer to their first postseason berth since 2001.

With a 3-1 loss by the Baltimore Orioles to the Boston Red Sox earlier in the night, the Mariners "magic number" is down to just three, meaning any combination of three Seattle victories or Baltimore losses will clinch a playoff spot for the Mariners.

"Really good effort by our guys tonight. And it has been a struggle here recently but we got back to doing what we do and that's controlling the strike zone," manager Scott Servais said.

The Mariners showed up late to the ballpark on Wednesday as Servais told the team to skip the normal pregame routine for a "show-and-go" game instead. Servais was hoping to shake up the routine and try to get the clubhouse to relax a bit as they'd lost eight of their last 11 games and were shut out 5-0 by the Rangers on Tuesday night.

"Sometime you need that and I believe in that a lot," Suarez said of the change. "It's not just coming here and working, working, working. Sometimes you have to take a little bit to relax and come here just to show and go and compete with the same goal. Our goal right now is to make the postseason. Every day come in and play, every day come in and compete and try to win the games and today was a really good job too."

The players had a group meeting before the game and spoke with each other about the funk they were in and how to dig themselves out and get across the finish line to clinch their postseason berth.

"A lot of good meetings today, a lot of good discussions," Servais said. "You find out a lot about people when things aren't going great and they haven't been going great here and our guys stepped up.

"We have a good team. The depth of our team and the reason we're good is because we trust one another and that's what you're seeing."

Kirby (8-4) allowed just five hits with a lone walk and four strikeouts. Nathaniel Lowe doubled in the first inning off of Kirby and scored on a Josh Jung two-out single for Texas' only run of the night.

With his four strikeouts against Texas, Kirby moves into a tie for third in franchise history for most strikeouts through a player's first 24 starts. He joins teammate Logan Gilbert and Mark Langston with 128 career strikeouts, trailing only the 148 of Michael Pineda and 145 of Félix Hernández.

Servais that Kirby didn't have his best stuff early in the game. However, Kirby made an adjustment in the third inning that helped regain the control of his pitches and cruise through the rest of the outing.

"I just wasn't quite finishing down the mound," Kirby said. "I just tried to slow myself down a little bit, concentrate on my breath in between pitches and I thought it worked out pretty well."

Kirby had allowed singles to Bubba Thompson and Marcus Semien to lead off the third with nobody out. He managed to get Nathaniel Lowe and Adolis Garcia to fly out before getting out of the inning with a groundball to shortstop from Josh Jung. Jarred Kelenic also made a nice play on Garcia's fly out by getting the ball back into the infield quickly from the warning track in center field as Thompson appeared intent on trying to score on the deep fly.

"That was nice. Pitch count was getting a little up there so I knew I needed to just bear down and make some good pitches," Kirby said.

It was Suárez's second game back from 10-day injured list after being activated on Tuesday. He had sustained a small fracture in the index finger of his right hand in a game against the Los Angeles Angels on Sept. 16. The injury mostly affects Suárez when throwing and he's not returned to his fielding role at third base yet. However, his bat as a designated hitter was a welcome sight Wednesday for an offense that has been mostly stagnant without Suárez and Julio Rodríguez.

Rodríguez is currently on the injured list with a lower back strain. He's eligible to return on Monday.

Suárez doubled in the first inning to drive in Dylan Moore to even the game at 1-1 after Texas jumped out to the early lead. He then singled in each of his next two appearances before drawing a walk off reliever Joe Barlow in the eighth inning as well.

Suárez said it felt good to see success so quickly after his return given he was hitting so well prior to the injury. He also said that his finger isn't causing any issues and they he might be able to return to the field as soon as Thursday night.

"I feel great," Suárez said. "It's not pain. It's nothing at all. It feels like normal. It just feels so good hitting and nothing hurts."

Ty France delivered the other two hits for the Mariners' offense on the night and scored two of the three runs in the game. Mitch Haniger drove in France with a sacrifice fly in the first inning and France scored again on a bases loaded RBI groundout from Carlos Santana in the third.

Erik Swanson, Andrés Muñoz and Paul Sewald combined for three scoreless innings of relief for the Mariners' bullpen. Sewald picked up his 20th save of the year for Seattle.