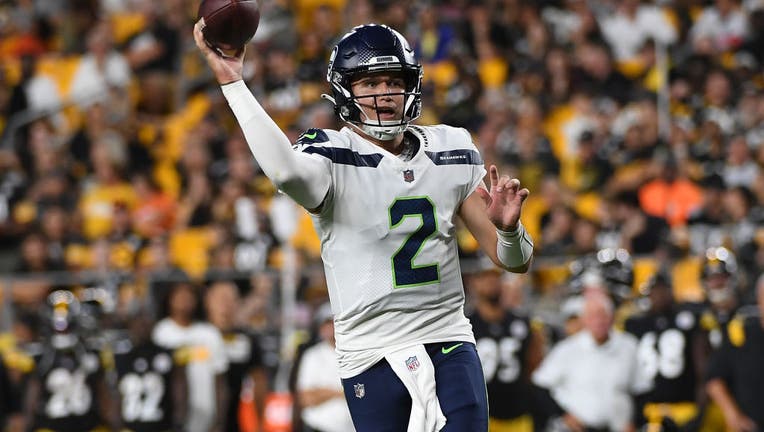 PITTSBURGH, PA - AUGUST 13: Drew Lock #2 of the Seattle Seahawks throws a pass for a two point conversion in the fourth quarter during a preseason game against the Pittsburgh Steelers at Acrisure Stadium on August 13, 2022 in Pittsburgh, Pennsylvania

RENTON, Wash. - The Seattle Seahawks were all set to start Drew Lock at quarterback in Thursday night's preseason game against the Chicago Bears. Now Lock is out after testing positive for COVID-19 following practice on Tuesday.

Lock had run with the first-team offense during Tuesday's practice session in building up to a starting effort against the Bears. Geno Smith had received the nod for the preseason opener against the Pittsburgh Steelers on Saturday with head coach Pete Carroll saying the plan all along was for Lock to start the second game against Chicago.

Lock will need to isolate from the team for five days before being eligible to return. The news came down roughly 90 minutes after Carroll met with reporters after practice.

It's a massive blow to Lock's chances of earning the starting job for Seattle, at least for the season opener. While he still could get his chance to start a preseason game next Friday against the Dallas Cowboys, it would delay the decision of appointing a starter until the end of the preseason.

Smith has received the vast majority of work with the first-team offense throughout training camp and Carroll reiterated that Smith remains ahead in the quarterback battle at this point in training camp.

"Geno is still the number one guy," Carroll said. "He's holding on to his spot at this point. I really like what Drew has shown us  and so, you know, you look at his passer rating and some of the stuff that he did, he did a great job. So both our guys can play. That's what we do know. They both can play."

Carroll said that both quarterbacks showed good things in their game against the Steelers on Saturday.

"They both did well. They both played well," Carroll said. "And Geno should have been 10-for-10. He had two drops and the ball on the sidelined that should have been a completed pass too. He did everything we asked of him, had a heck of a two-minute drive, took care of the ball and ran a little bit so he did good. Drew came right out, took us right down the field, you know, and did well popped the ball around and converted some third downs and he did good stuff. So that's what's been happening. They kind of continue to add to the kind of work resume and we're just trying to figure it out in time. Pleased with both guys so far."

Smith had the best throw we’ve seen from either quarterback in training camp late in Tuesday’s practice. While rolling to his right, Smith launched a pass down the right sideline for Penny Hart that hit his target perfectly in stride for a 60-yard touchdown.

Unfortunately for Lock, his inability to be available for Thursday's game will cost him opportunities that he may have needed to supplant Smith as the starter for the Seahawks.

Ken Walker III away from team with hernia issue.

Rookie running back Ken Walker III was not with the team on Tuesday as he is dealing with a hernia that puts his status in doubt for the regular season opener against the Denver Broncos.

"Ken's got a little hernia thing that he's working on," Carroll said. And we've got to get through that. So I don't know what to tell you yet, but it's something that we can attend to and all that and we just got to make sure that he's OK by the opener is what we're shooting for."

Walker carried five times for 19 yards and caught one pass for 11 yards in his preseason debut against the Steelers on Saturday. There was no indication after the game that Walker had experienced an issue and he has been a regular participant in practice throughout training camp.

Nevertheless, Walker is now facing an ailment that could jeopardize the start of the season, especially if it requires surgery. 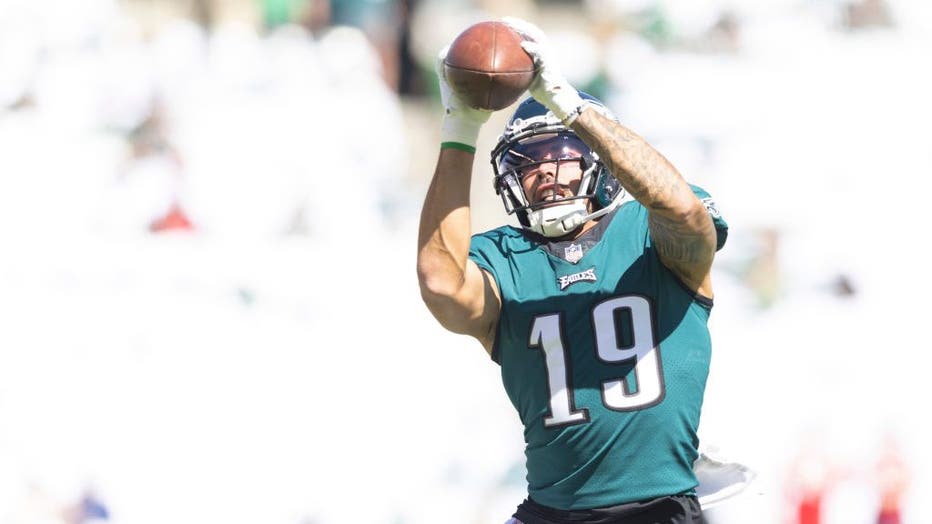 PHILADELPHIA, PA - SEPTEMBER 19: J.J. Arcega-Whiteside #19 of the Philadelphia Eagles warms up prior to the game against the San Francisco 49ers at Lincoln Financial Field on September 19, 2021 in Philadelphia, Pennsylvania. (Photo by Mitchell Leff/G

Wide receiver J.J. Arcega-Whiteside joined the Seahawks on Tuesday a day after being traded to Seattle in exchange for cornerback Ugo Amadi.

Amadi was reportedly set to be one of the team’s first roster cuts as the team needed to get from 90 players to 85 by 1 p.m. on Tuesday. After the news broke, the Seahawks then secured a trade with the Eagles to bring Arcega-Whiteside to Seattle instead.

Arcega-Whiteside was a second-round pick of the Eagles in 2019 that struggled to produce during his three seasons in Philadelphia. The Eagles had tried moving Arcega-Whiteside to tight end during training camp this year before dealing him to Seattle. Arcega-Whiteside said he’s back to being a receiver with the Seahawks.

"This is a guy we really liked coming out [of the draft] and he's an aggressive catcher, contested catch guy was really what we liked about him," Carroll said. "He was so strong and physical and all that. Made a lot of big plays, was a really go-to guy in the program at Stanford. And he's unique. He's a big strong kid. He was 225 [pounds] coming out, he's like 230 right now. He was playing some tight end even for them, which we like all of that just that diversity."

– In order to get to the roster limit, the Seahawks placed wide receiver Cody Thompson on injured reserve and waived cornerback Josh Valentine-Turner, defensive tackle Antonio Valentino, guard Eric Wilson and wide receiver Deontez Alexander. The moves leave Seattle with 86 players on their roster. However, linebacker Aaron Donkor – a German native – is part of the NFL’s International Player Pathway Program and does not count against the roster limit.

– Rookie tackle Liam Ryan was activated from the physically unable to perform list and took part in his first practice on Tuesday. Ryan injured his foot during the team’s offseason program after signing as an undrafted free agent out of Washington State.