The City of Bellingham’s diversion dam on the Nooksack River blocks 16 miles of critical salmon habitat. The new water intake plan will allow the city to draw on the resource without blocking fish passage.

BELLINGHAM, Wash. - On Monday, crews demolished a river dam in Northwest Washington to clear the way for salmon to reach critical habitat. It’s an explosion years in the making.

The blast near Bellingham will make the Middle Fork Nooksack River free flowing for the first time in more than five decades.

The diversion dam in Deming, built in the early 1960s, is 24 feet tall and blocks 16 miles of cool river habitat from spawning salmon and other fish.

“This is a great day for everyone who cares about healthy rivers, salmon, orcas, clean water: The Middle Fork Nooksack dam is coming down,” Amy Kober from American Rivers exclaimed. 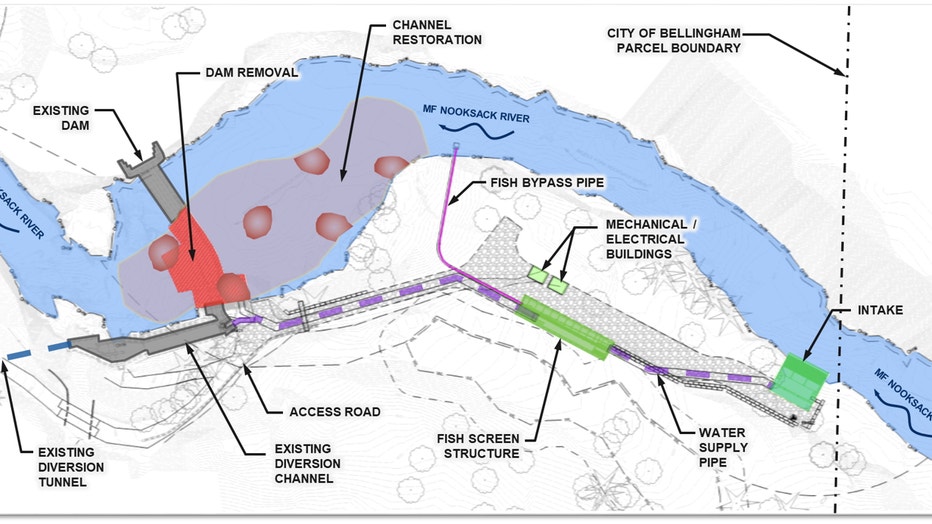 The City of Bellingham’s diversion dam on the Nooksack River blocks 16 miles of critical salmon habitat. The new water intake plan will allow the city to draw on the resource without blocking fish passage.

While the dam is a water source for the City of Bellingham, the lack of fish passage has made it problematic. For years, Nooksack Indian Tribe and Lummi Nation have pushed for its removal.

There wasn’t a clear financial solution, however, until the tribes, city and American Rivers pulled together government partners and private partners like the Paul G. Allen Family Foundation for the funding. The new design will allow water intake for the city without the dam, opening up the river for the first time in decades.

“The lesson is here that you can get creative and that these tricky projects can happen if you bring together the right people to get it done,” Kober said.

Kober said it’s hard to put a price tag on a healthy river. The actual price tag is about $20 million, according to U.S. Fish and Wildlife.

“Investing in water infrastructure, investing in river restoration, pays dividends for years to come so I think when we think about the cost of a project like this, looking at the benefits too and the long-term benefits of clean water supply and salmon and a healthy ecosystem,” Kober said.

The benefits could extend to the critically-endangered southern resident orcas. In 2018, NOAA Fisheries ranked Nooksack River Fall Chinook Salmon among the top priority stocks for the orca. The Elwha is also at the top of that list, the river known for the largest dam removal in U.S. history back in 2011.

The Nooksack is not the only Western Washington river losing a dam this summer. The Pilchuck River dam is also being removed, but without explosives.

The Nooksack diversion dam will take two blasts to demolish, one Monday and one in a couple of weeks. But when the work is done late this summer, experts say the fish will come.

“An ecosystem healing itself is something that some of it happens right away but of course a year from now it’ll be amazing to see that river, the banks greened up, the river flowing with salmon coming back,” Kober said. “Can’t wait to see it.”