Crews cleaning up after wind storm in Lynnwood and Edmonds

High winds on Tuesday knocked down trees and power for thousands of residents.

LYNNWOOD, Wash. - The communities of Lynnwood and Edmonds spent the day Wednesday cleaning up heavy snow, downed trees and limbs after a winter storm hit the night before.

Jeff Harris spent the morning cleaning up after large branches came down in his driveway and into the street overnight.

"Some of the branches are so big, it was like a big boom and I’m like ‘please don’t let the branches hit the car,'" said Harris.

He says the branches fell in stages, starting around 1 a.m. on Wednesday.

"It just gave way and absolutely made a mess of the street and in the front yard and stuff. It's going to be a big cleanup job for sure," said Harris. "It was really the snowfall and the heaviness. I think everything froze, and it got brittle and just fell."

Fortunately, the limbs missed the family vehicles, but they made for a busy morning.

"Slow, and I am out of shape, so we’ll get there though. Slowly, I just get it in the yard and start chopping it up from there," said Harris.

Curtis Cuttitte, the GM of Eastside Trees Works, said his crews were also extremely busy Wednesday afternoon, fielding calls to clear fallen trees and limbs for customers. He says the weight of the heavy snow was the biggest factor in causing branches to break overnight.

Cuttitte says deciduous trees with remaining leaves were especially hard-hit due to the extra weight collecting on the branches. He says the ground has also been saturated by rain and that's causing trees to uproot and tip over as well. 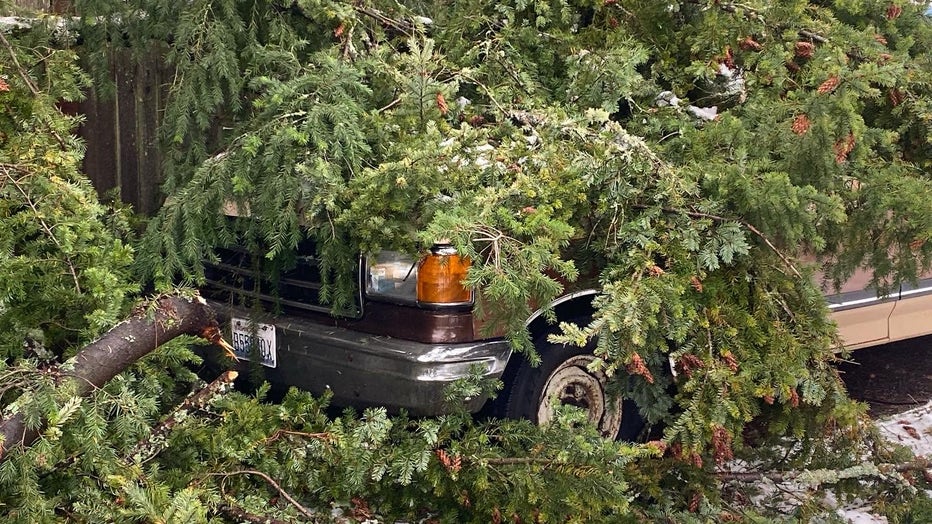 Trees had fallen in the area around Maple School in Edmonds. Across the street from the school, large branches had fallen on a pickup truck, covering the cab.

Heavy wet snow also made for a challenging snow cleanup at the school.

"It makes me feel like I’m the age that I am," said Rick Jahrmarkt, a custodian. "I just have to clear the sidewalks and stuff like that. Thankfully, the kids are at home safe."

Jahrmarkt said he was making good progress, but had to make a quick stop before getting to work.

"I forgot my gloves, but thankfully, they had this nice pair of lady's driving gloves at the grocery store. It’s keeping my hands warm," said Jahrmarkt

Businesses were also busy clearing snow Wednesday.  Some of those residents who were able to stick closer to home, told us they would do the cleanup later.

"It snowed a lot, so just walking my dog in the snow," said Kunal Sengupta, from Edmonds.

Sengupta was taking his dog, Spike, out for a walk in the aftermath.

"I’ll do some shoveling for my driveway. Maybe use some of Spike’s help," Sengupta said. 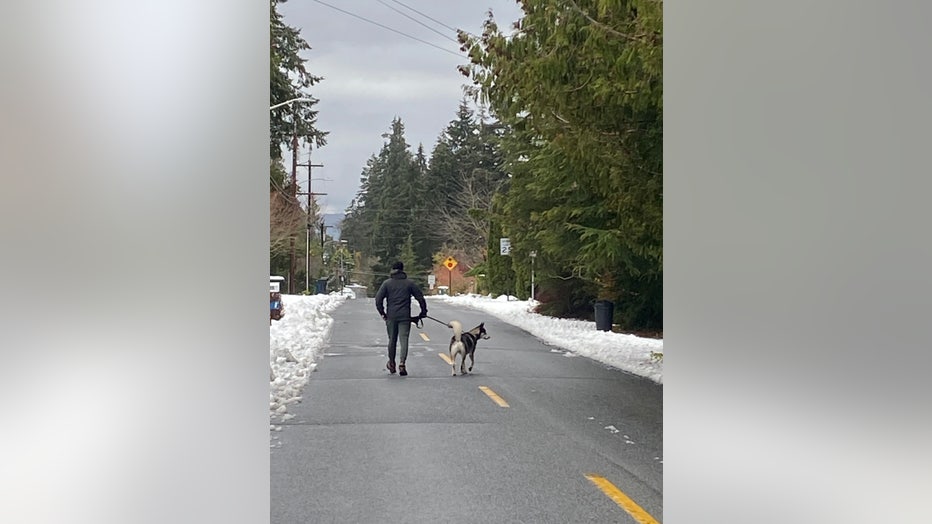