He hasn't seen his son in three and a half years, and hopes talking about it will bring awareness to lawmakers and the proper authorities.

REDMOND, Wash. - A father is reaching out to FOX 13 News hoping his plea will bring his child home after he says his ex-wife fled the country and kidnapped their son.

Jay Sung says becoming a father gave him a sense of purpose he never felt before.

For about three and a half years, Sung said he worked to make lasting memories with his son, Bryan. Now, those memories are all Sung has left.

"I waved my hand to Bryan and told him I wish him an enjoyable trip. And that was the last time I saw Bryan," said Sung.

Court documents say in June 2019, Sung’s soon-to-be ex-wife, Minjung Cho, left on what was supposed to be a three-week vacation with then 3-year-old Bryan.

However, she never came back.

"There was a little bit of fear in the back of my mind, but I trusted the system. I trusted the law, and I trusted Korea, too. I never thought it would have been this long I had to fight for," said Sung.

Sung says he has legal custody of his son.

He says he has called the police. He has reached out to federal lawmakers. He has even reached out to the Korean government, but despite the law being on his side, nothing is happening.

Sung says he fears his child no longer knows him.

"Somebody has taken away all that opportunity, time and memory from him," said Sung.

It has been three and a half years since Sung last saw Bryan in person, but he remains hopeful.

"I’m certain that we will bring Bryan back, and I will never give up," he said.

Sung says he is sharing his story because he needs help.

He told FOX 13 that laws are in place in Korea to prevent this kind of situation, but he says there is no enforcement.

He hopes talking about what happened to his son will bring change. 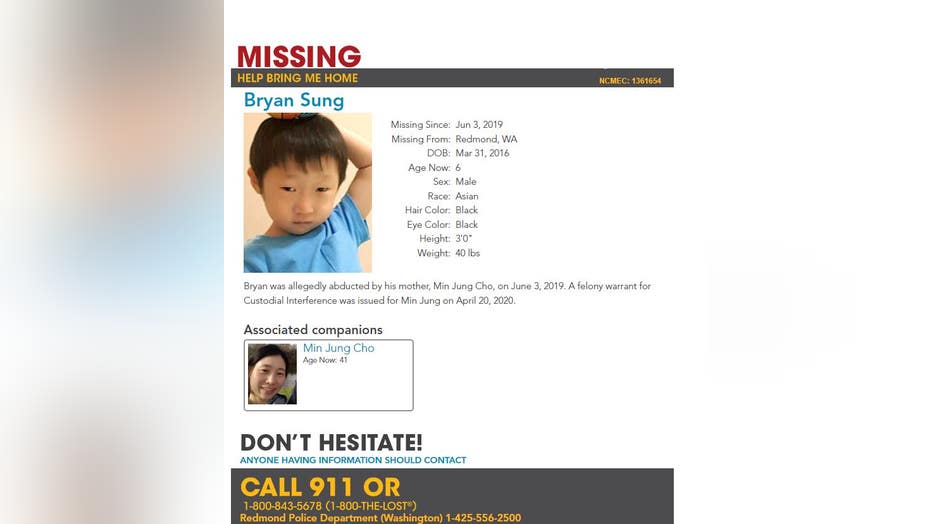