SEATTLE - The Seattle Police Department is cracking down on ongoing organized shoplifting groups, leading to a retail theft operation that resulted in 53 arrests in a single day and thousands of dollars recovered in stolen merchandise.

"These are organized groups that hit retailers with the sole purpose of stealing to either resell them or use them as currency for other things," said Sgt. Randy Huserik, public information officer for the Seattle Police Department.

The big bust occurred at nine stores on Wednesday in just under 15 hours. Of the 53 people arrested, 16 of them were booked in King County Jail. Four of them had warrants.

"We had officers, both in plainclothes working with those stores’ loss prevention personnel and then a uniformed officer acting as arrest teams to target the suspects that are committing these crimes," explained Huserik. "An officer is up in their surveillance room that’s watching it. They’re easily and quickly communicating with our officers that are in the store via radio making them aware of suspect description, the items that they’re concealing, where they’re concealing them, the location on the store at that point. And once they start heading to the door, that’s when officers will move in and make the arrest."

Huserik said large retailers and grocery stores have been losing thousands of dollars in merchandise due to ongoing problems with organized theft groups. He said some places are still struggling to recover from the pandemic.

"Not only does that impact the store itself with their losses and their bottom line, but the every-day people who walk into those stores that are buying things from those stores because of the losses those stores are sustaining, they have to raise their prices and then that impacts everybody," said Huserik. 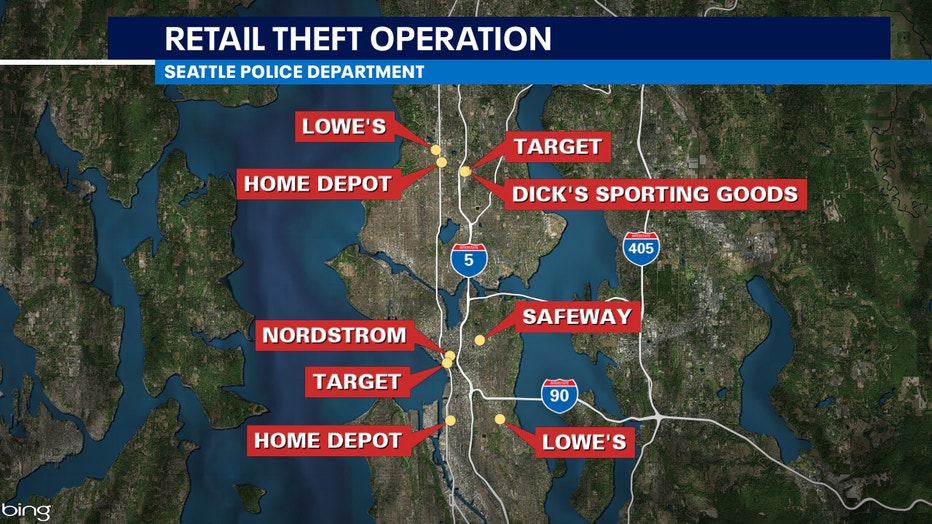 Thieves are swiping high-value items in bulk, from luxury merchandise at Nordstrom’s to power tools or home appliances at Lowe’s or Target. Huserik said some people try to smuggle their haul through an emergency exit, which he explained is a felony. Most people are brazen enough to walk out the same way they came in.

"Sometimes it’s as simple as that—they’ll just load up a shopping cart and walk out the door, walk past the points of sale and walk out the front door with it to an awaiting car. Throw everything in the car and take off," said Huserik.

Four people were arrested at the Seattle intersection of 3rd Ave and Pine Street for trafficking stolen merchandise. While most items were recovered and returned in this latest bust, Huserik said their uniformed and undercover officers will still be watching out for sticky fingers.

"We’re out there. We’re going to continue to run these operations and continue to go after the folks that are continuing to commit these crimes," said Huserik.

He mentioned the people arrested could face a number of charges, including organized retail theft, to burglary, trespassing and even assault. Investigators will be forwarding these cases to the King County Prosecutor’s Office.