SEATTLE - A possible serial arsonist could be on the run and responsible for at least ten fires in Seattle.

Seattle Fire Chief Harold Scoggins is urging neighbors and business owners in the area to be extremely vigilant.

"I knew exactly what was happening so I woke up my family and said we gotta go," said Kokovich.

Right next to his Seattle home, he watched as firefighters battled this three-alarm fire that ripped through townhomes at 1007 Sturgis Ave. South. They were still under construction. 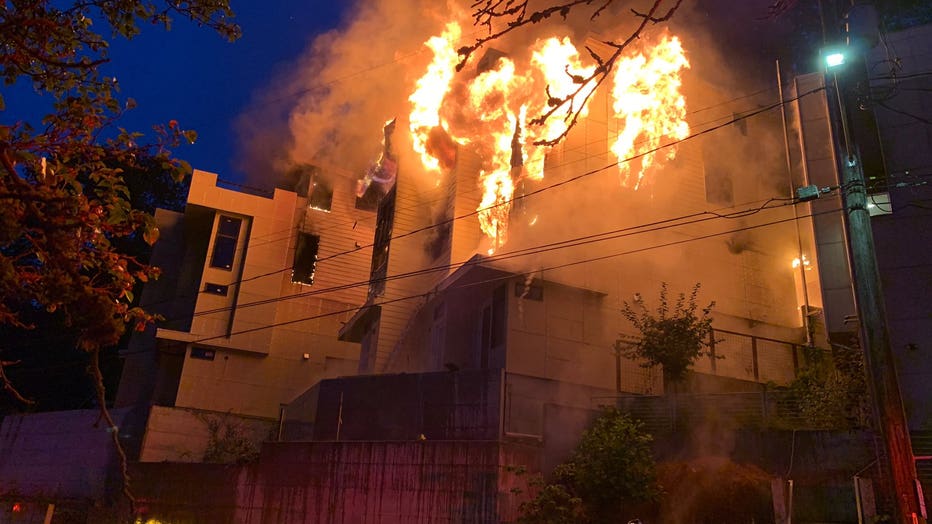 "This fire required approximately 100 Seattle firefighters to contain and stop this fire, " said Scoggins. "We laid over 7,000 feet of hose to supply the water needed to fight this fire."

The fight was challenging and the response prompt and strategic, Scoggins said.

"It’s destroyed, said Woo. "Now that they have the water and everything, even though the other buildings are up, it’s destroyed."

What’s worse, investigators believe this fire – and many others – were all intentionally set.

"In the last 30 days in the area around Rainier and Beacon Hill, our arson investigators and SPD arson bomb squad has identified ten fires in this area that have been intentionally set," said Scoggins.

All of the suspicious fires happened at three locations since July 14 between 2 and 5 a.m., fire officials said:

At a news conference Thursday night, Chief Scoggins urged the public to be vigilant, report suspicious activity, and secure homes and businesses.

For now, the investigation is underway to determine if this is the work of one arsonist or multiple.

If anyone knows anything about these fires, they are urged to call Seattle fire marshalls.