How to get around Washington mountain pass closures

FOX 13's Adam Gehrke explains how to get around four mountain pass closures on Jan. 6, 2021 in Washington state. Snoqualmie, Stevens, White and Blewett passes were all closed due to dangerous driving conditions.

SNOQUALMIE PASS, Wash. - With all main highways across the Washington Cascades likely closed through at least Friday due to heavy snow and dangerous travel conditions, Washington State Patrol troopers are warning drivers not to attempt to find their own way over the mountains on forest roads.

Usually, a trip from Seattle to Eastern Washington is a direct drive across Snoqualmie Pass along Interstate 90. But with that and every other mountain pass closed and no viable detour options, asking popular GPS navigation mapping programs such as Google Maps or Apple Maps to plan a route to towns just on the other side of the Cascades such as Easton or Cle Elum could send you on a dangerous detour.

A default route plotted Thursday afternoon from Seattle to Easton, Wash., would send drivers to use seldom-traveled forest roads that are not designed for regular vehicular traffic nor treated for heavy snows. 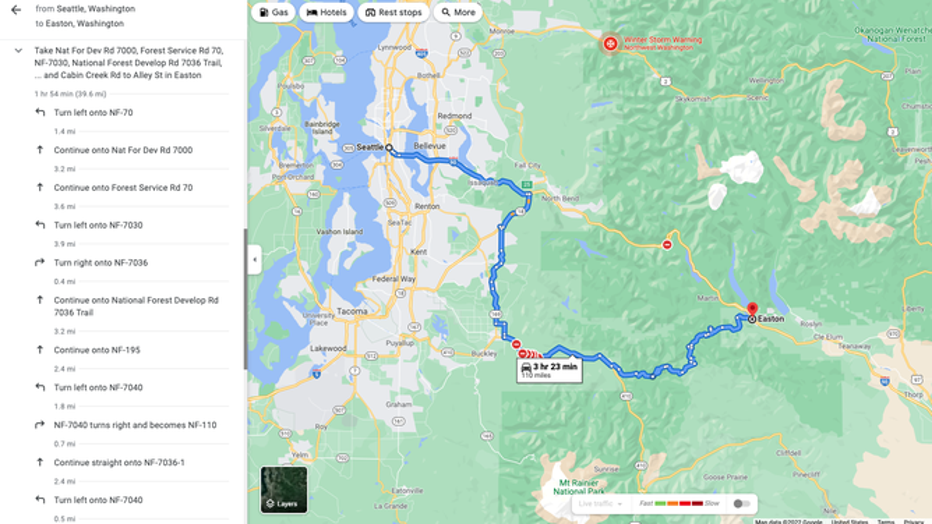 The suggested route on Jan. 6, 2022 from Seattle to Easton, Wash. while I-90 was closed due to heavy snow. The software selects several forest roads along the route that troopers deem dangerous during winter storms. (Google Maps)

Wright said that calling for help could be just as problematic as cell service is "sketchy at best."

Over 4 feet of snow have fallen at Snoqualmie Pass with higher amounts at higher elevations. Department of Transportation crews have come off the passes, citing high avalanche danger and numerous tree falls due to heavy snow. Similar risks exist on forest roads.

Wright said they have already been getting reports of off-road vehicles getting stuck in these areas.

"We really discourage this idea for safety reasons," Wright said.

RELATED: Here’s what you should keep inside your car in case of an emergency

FOX 13 is giving you team coverage from around the state as the area experiences flood warnings and watches, Pass closures due to snow and threats of landslides due to heavy rains

FOX Weather has reached out to both Apple and Google for comment.

WSDOT crews hope to open the passes on Saturday.