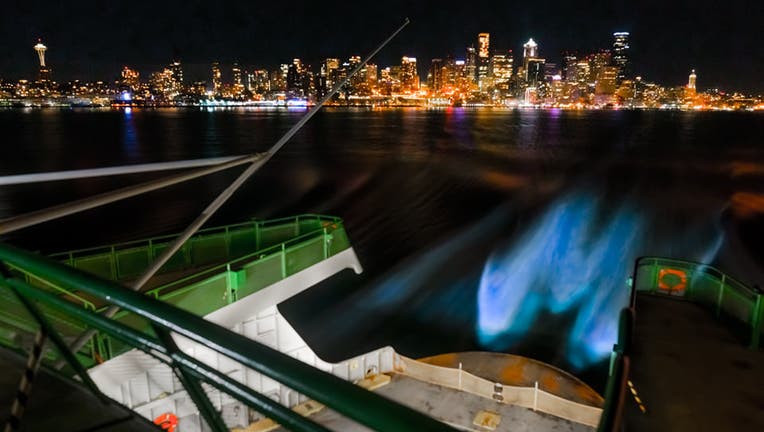 Bioluminescence seen on extended exposure photo while on board the Seattle-Bainbridge Island ferry.

ON PUGET SOUND, Wash. -- - A trip on a Washington State ferry treated a local photographer an amazing sight of bioluminescence in Puget Sound.

Matt Nichols, who is an experienced local photographer in capturing the glowing blue aura that emanates from plankton releasing energy, got a tip that taking a ferry at the right time and place might give off a good display of the phenomenon.

"Someone told me they had an amazing experience with bioluminescence in Seattle by self-agitating the water, so I planned a trip out to see for myself!" said Nichols, who lives in Forks.

Nichols has frequently captured the luminous display along the Washington coast, when a mild summer night with no moon to spoil the darkness and decent wave activity can churn up a blue glow.

But he had never thought much about Puget Sound.

"Bioluminescence in the Puget Sound is a different experience than on the coast, because there typically aren't large waves agitating the bioluminescent algae to make it glow," he said. "So, I had a hunch that being on the ferry, you might be able to see the blue glow in its wake!" 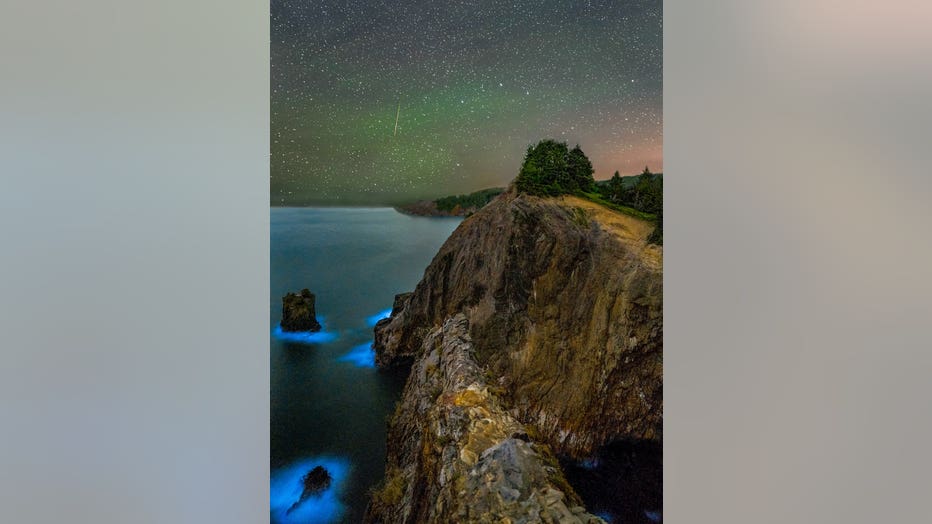 Bioluminescence off the Oregon coast

Another bioluminescent fan had told him that he had seen the blue lights from the ferry when they were younger.

So Nichols bought a ticket on the Seattle-Bainbridge Island ferry Saturday night after the moon set and brought his camera.

"At first, the light pollution was making it impossible to see anything, but once the ferry got far enough away from the Seattle lights, I could clearly see the boat's wake was glowing blue at times!" Nichols said. "The wake glowed sporadically, because the bioluminescent algae was spread out, but it was such an incredible sight, I immediately jumped back on the next ferry and drug out the experience a little longer!!"

Bioluminescence is when living organisms produce light so they have the chemistry within their cells, their bodies to have a chemical reaction that involves release of energy comes out as light that we can see, says Michael Latz, a marine biologist at Scripps Institution of Oceanography through the University of California, San Diego.

The single-celled plankton, called dinoflagellates, release that energy when excited by wave action, or even a passing swimmer. But the light that’s just beautiful to our eyes, is much more meaningful to them. 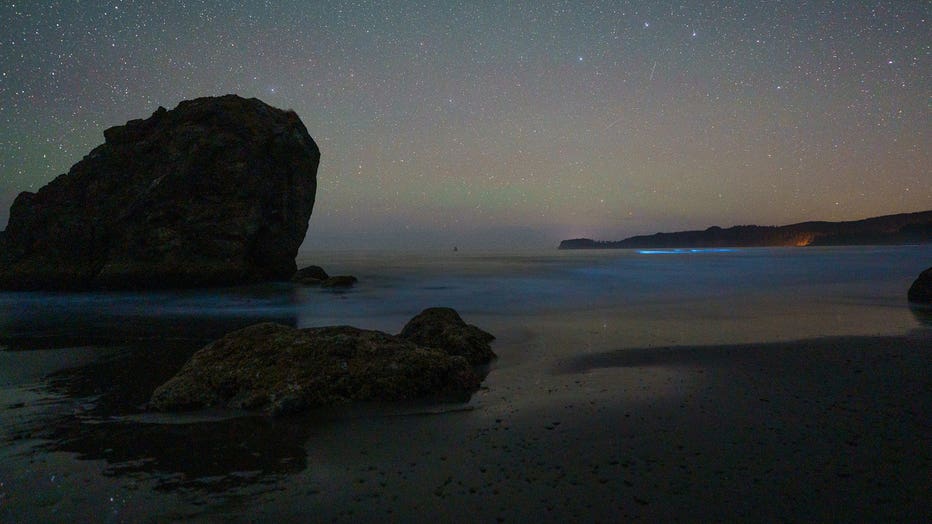 Bioluminescence off the Washington coast.

"The purpose of the light can be for attracting prey or searching out prey like a flashlight or attracting mates or defending against predators," Latz said. "Bioluminescence or signaling by light is a really effective way of communicating, and of course, in shallow waters like along the coast, it's something that occurs at night."

This luminous display is actually a form of "red tide," a bloom of algae that in extreme cases, can foul coastlines and irritate your eyes and skin.

Nichols says to see the glow with your eyes needs very dark conditions and a lot of patients for your eyes to adjust.

"This means any light pollution could make it impossible to see," he said. "Thus, the moon has to be almost completely out of the night sky in order to see the algae glow. Also, your eyes need to be adjusted to the darkness in order to see it."

In the photo he took above, he says it required an extended exposure to get the blue to show up that bright on the image. The city skyline was then taken with a short exposure to not be affected by the ferry's motion.

Nichols shares more tips and sightings as part of the Bioluminescence Experience NW Facebook group. Though most of his sightings have been along the coast, he says he'll be keeping an eye on Puget Sound too.

"It was such an inspiring journey, and I can't wait to have more bioluminescent experiences in the Seattle area in the future."