SEATTLE - Seattle ended up with its second hottest June on record by average high temperature and I'm not sure what is more surprising -- that we didn't finish in first place after the blistering end-of-the-month heat wave, or that we would even be in top 3 the way the month began.

It came in behind the scorching year of 2015, which holds several of the monthly average records here in addition to being the current champ for hottest overall year on record. 2015's average June high was 78.9 degrees.

But the fact that we're even within shouting distance was quite the feat if you remember how June began: Rather rainy and cool. The first two days were over 85 but the clouds arrived on the 3rd and hung around for a while. Nine days of the first two weeks of June had some sort of rainfall with nearly an inch and a half over three days. 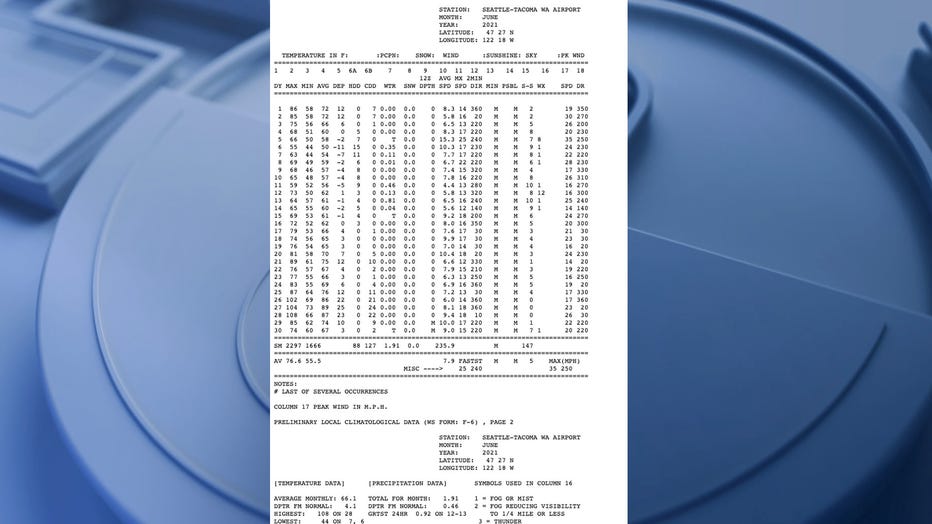 But notching three days over 100 sandwiched around some upper 80s will boost your stats in a hurry. Seattle had an average high of 84.5 vs 80.8 for 2015 over the final half of the month. That's like trying to rally from a 10-run deficit in the 4th inning in baseball and getting within 2 or so at the end.

For rainfall, even though it didn't rain at all since June 14, Seattle ended up at 1.91 inches from the soggy first half of the month, good for about a half inch above normal.

I suspect July will have a similar blog in a few weeks?

We don't know where July 2021 will end up yet on the all time rank, but long range forecasters seem to think it could rate on the higher side once again.

Climate forecasters with NOAA indicate strong confidence July will remain hotter and drier than normal -- which is saying something in our usually warm and dry summers.