The State Climate Extremes Committee has verified an all-time Washington maximum temperature record of 120 degrees that was measured during the June 2021 heat wave.

HANFORD, Wash. - The historic heatwave that blistered the Pacific Northwest and southern British Columbia in June just added another record to the pile of over 200 records that were shattered during the several-day event: Washington's all-time highest temperature recorded.

Researchers with the State Climate Extreme Committee have now verified the temperature climbed to 120 degrees in the Eastern Washington town of Hanford on June 29. That breaks the previous statewide record of 118 degrees first recorded in Wahluke on July 24, 1928, and matched at Ice Harbor Dam on Aug. 5, 1961. 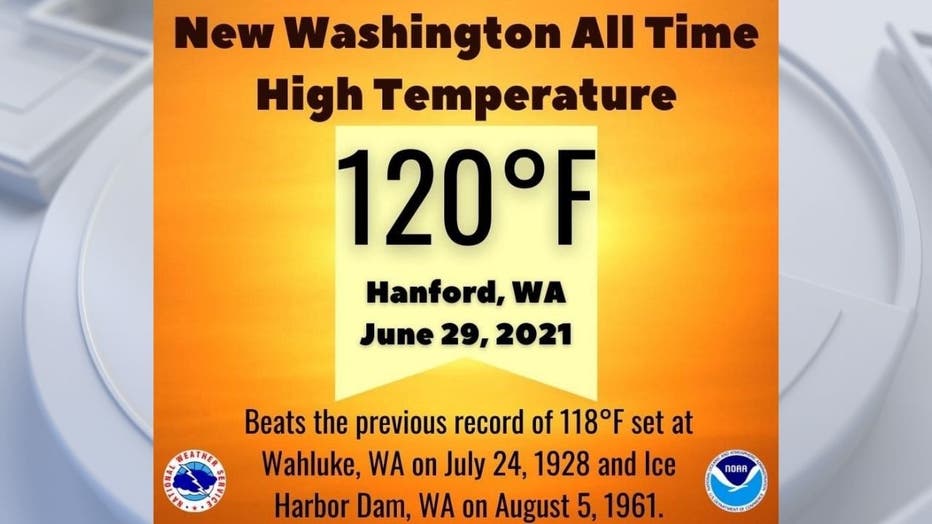 In Oregon, researchers confirmed the state tied its all-time heat record of 119 degrees in two locations of Pelton Dam and the Moody Farms Agrimet on June 29. That matched the 119 degrees set in Prineville on July 29, 1898, and Pendleton on Aug. 10, 1898, according to the National Weather Service.

Back in Washington, the SCEC had a daunting task to verify the record temperature and where, as 31 observation sites around the eastern half of the state reported temperatures that matched or exceeded 118 degrees.

RELATED: Hotter than Atlanta has ever been: The mind-boggling numbers of Seattle's historic heat wave

But the committee agreed that many of these reports were unsuitable for consideration. Some weather stations, such as those owned by private citizens or those run by private networks, may not meet accepted standards for calibrations, locations and maintenance requirements and as such were eliminated from consideration.

Several of the hottest readings came from instruments run by the state's Department of Ecology. Still, committee members considered those weather stations are near roads and rivers and for monitoring environmental quality.

"It is well-established that these locations are not typically considered ideal for representative temperature measurements," committee members wrote in their record report. "Additionally, the temperature sensors themselves are all located above a metal instrument housing, very near the solar panel and the ventilation at the top of the housing. Because of these sensor housing issues, the readings seemed to be too extreme (warm bias) to be considered valid."

Researchers also consulted infrared satellite imagery from the day and noted the satellites indicated the hottest temperatures in the state were near Hanford. 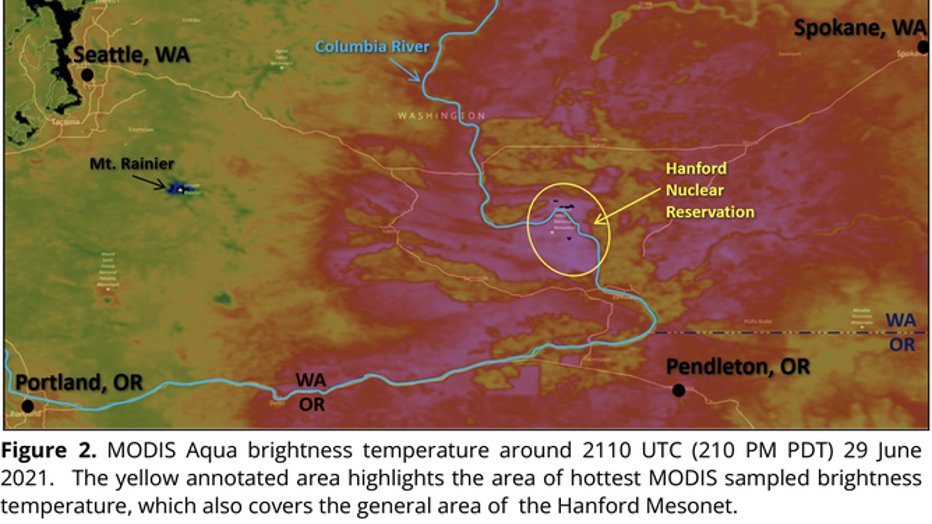 "Although satellite brightness temperature cannot be directly compared to 2-meter ambient air temperature, this imagery still helped the committee to rule out anomalous observations from other parts of the state, which were not corroborated by the satellite imagery, and confirm the extreme heat in the Hanford region," the report stated.

The accepted Hanford station has been in service since March 1986, shows a well-maintained calibration and maintenance log, and other sites nearby showed temperatures in the same realm.

The heatwave set or tied 128 all-time heat records in Washington and another 116 in Oregon, including smashing Seattle's all-time heat record twice. Seattle reached 104 on June 27, breaking its old hottest day of 103 set on July 29, 2009.  The next day, Seattle would reach a previously-unfathomable 108 degrees. Several cities in the Puget Sound region touched the 110-degree mark.

Even in Canada, the heat across southern British Columbia was relentless. The town of Lytton set Canada's all-time heat record on three consecutive days, peaking at 121 degrees. The previous Canadian record had been 115 degrees set in Saskatchewan.

At least 100 people died in Washington from the heat, with hundreds more reported in Oregon and southwestern Canada.