The King County Prosecuting Attorney's Office has filed charges against two men accused of looting a Bellevue jewelry store in May.

Jaaron Davis and Deondre Davis, two brothers from Tacoma, are both charged with first-degree burglary.

According to the prosecutor's office, both men were expected in court on Aug. 17 for their arraignment.

There are still multiple wanted suspects in the case.

"You want bullets? We got bullets."

They're frightening words detectives say an armed robbery suspect leveled at a jewelry store worker amid the chaos, vandalism and widespread looting in Bellevue on May 31.

Now, police are asking for your help to identify these four suspects - part of a pack of 10 - who showed up in front of Marci Jewelry on 116th Avenue NE across from Overlake Hospital about 5:30 that afternoon.

Surveillance video shows one suspect use a hammer to smash the glass door. From there, the train of 10 suspects each ducks through the broken window to steal from the store beore bolting back out the door.

Detectives say at least two suspects flashed guns in their waistbands to the employee who was outside the store trying to protect it.

Detectives say two of the suspects then drove a silver Hyundai with damage to the rear passenger side of the vehicle to a Bartell Drugs in Bellevue, where they burglarized it as well.

Bellevue Police are hoping you can identify the burglar in the red North Face hoodie and his buddy in the black jacket with the multi-colored bandanna around his neck. 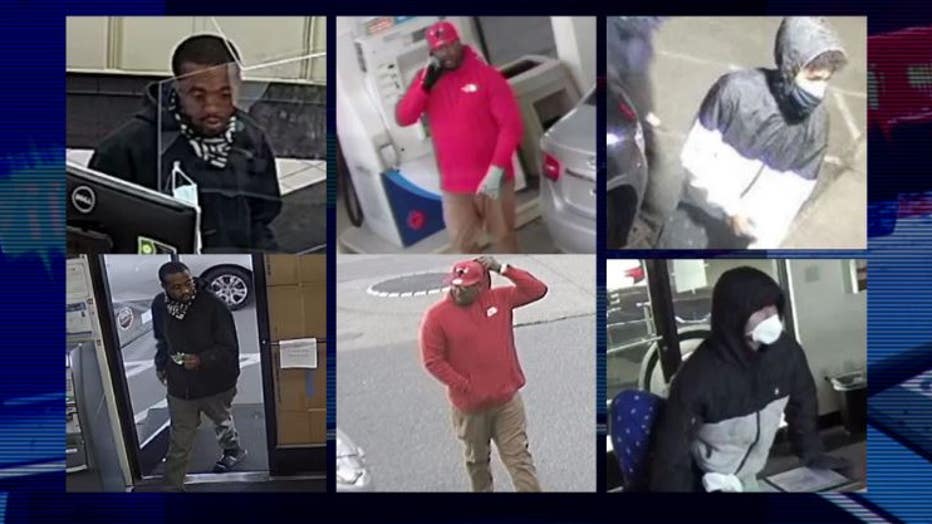 They were seen on Bartell's surveillance video breaking into the drug store to steal alcohol and other items.

"That day we had a lot of demonstrations and protests that were occurring in the downtown core ... and what we saw on the other side of the city, on the other side of 405, was some individuals that were meeting up at an AM/PM and apparently took advantage of our department being distracted," said Capt. Dave Sanabria with Bellevue PD.

Detectives are also hoping to identify two suspects in the Marci Jewelry Store robbery. Both wore pajama bottoms and hoodies.

Two other suspects in the Marci Jewelry burglary - 20- and 21-year-old brothers from Tacoma - have already been identified and caught. Bellevue Police are hoping the public will continue to provide leads.

"We still have citizens that are sending in video from that day to us and we encourage that and we're hoping that by releasing these images to the public, someone will recognize these people and help us bring them to justice," Sanabria said.