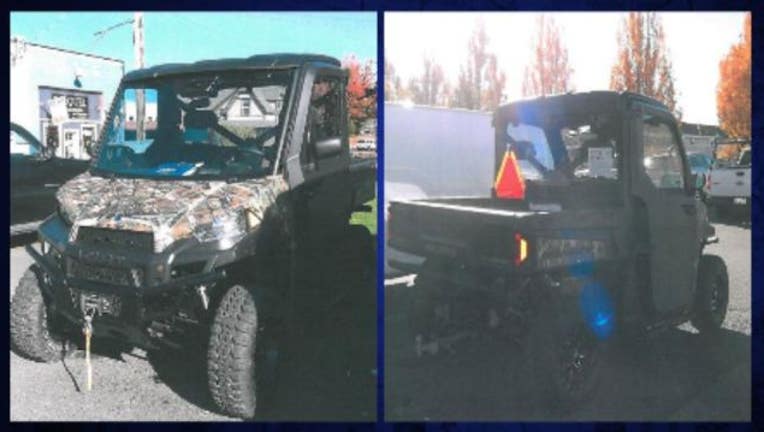 SEATTLE -- King County detectives are asking for your help finding a disabled man's ATV. It's not just any vehicle, it's his only transportation and it was stolen by thieves. Joe Chase had surgery on his arms 15 months ago , but when he woke up his left arm was dead, and his right one was weak -- leaving him unable to drive his truck. It left him stranded at home five miles outside of Enumclaw, so Joe bought a 2013 Polaris Ranger 900 ATV. Then he spent $7,000 to make it street legal. "I had to put signal lights on it, a horn and mirrors," he said. Joe even installed doors and a heater to make it comfortable. "It gives me some freedom to go to town, get groceries or whatever," Joe said. One day last month he woke up, and the ATV was gone. His freedom stolen by crooks. "They must have pushed it down without starting it," Joe said. The tracks lead to the gate he's now had to fix after they broke through it to get away. King County Sergeant Cindi West said Joe's ATV is one of the first of its kind that is street legal and registered. "To the thieves in this case, you think you may have stolen just a regular ATV that you can go out and do whatever it is you want with it, but this is an actual vehicle that belongs to somebody that needs it for their mode of transportation," Sgt. West said. "Have a heart, pick up the phone. Dump it somewhere. Call us and let us know where it's at and we'll come pick it up." Joe hopes his ATV will be found intact, not stripped for parts. Until then, he's lost his independence. "I miss it real bad. Right now, I can't get to town," Joe said.