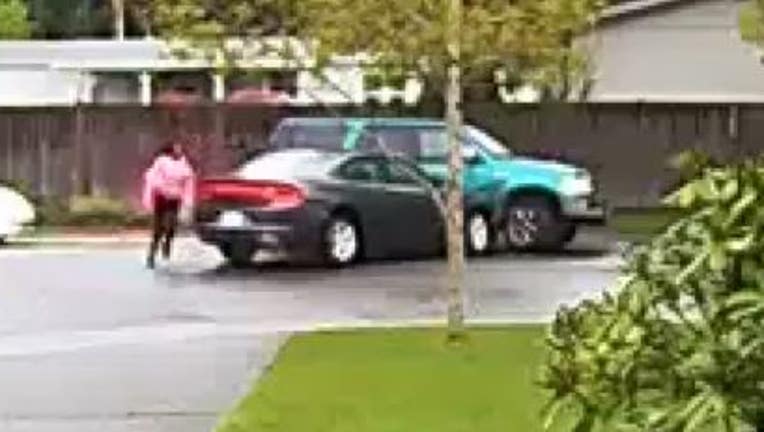 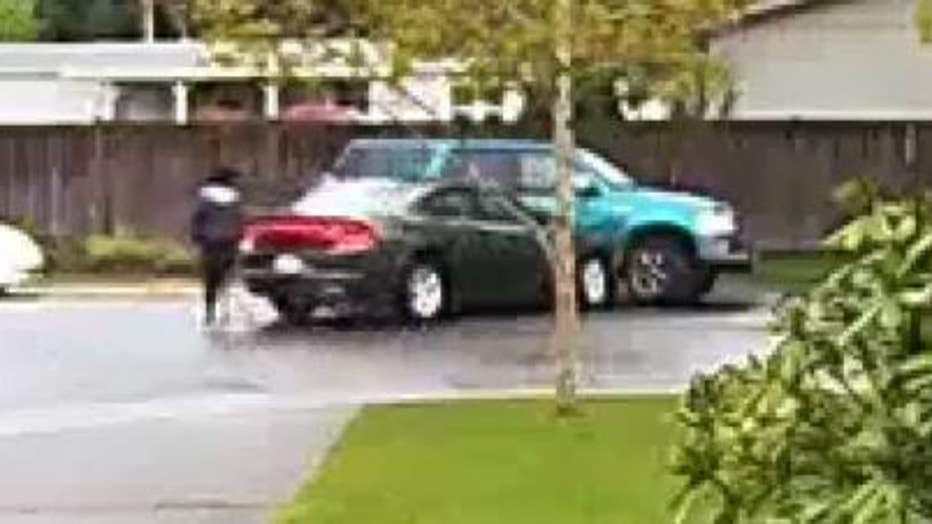 WANTED IN PIERCE COUNTY - This case will leave scratching your head. Home surveillance video showing a strange hit and run in Pierce County.

Watch the video below for yourself to see the suspect's Dodge Charger drive slowly down to the end of a cul de sac of a neighborhood in the Frederickson area of Pierce County last Saturday, April 24th, around 5pm.

The driver seems to be safe and slow and in total control, but then as the car makes the turnaround to leave, it drives straight towards a Ford Expedition parked across the street and smashes right into the passenger side of the SUV.

Now for the really bizarre part as the video shows the driver and passenger quickly get out of the car and switch seats. The driver who caused the crash appears to be a female with long hair and wearing a pink-colored jacket. The passenger who takes over the wheel wore darker clothes and could be a guy or a girl.

They backed-up after switching seats and then just drive away -- no note or anything.

The owner of the Expedition, Michelle Dunne, says they didn't go far at first. "They drove down the way, parked at a neighbor's house over on the other side and then somebody, a man, drove the car back over here and then screamed at my neighbors. I was told that she was being like, threatening, intimidating, saying like, ‘I didn't hit anything,’ saying profanity words, trying to intimidate them, probably to scare them from giving me the information of what happened. That's when they called the police and then he took off and went down the road and went out of the housing development," said Dunne.

Michelle says the crash did a lot of damage to her vehicle. She can't open either passenger side door and there's significant damage to the inside, as well.

Michelle says she was set to take her kids camping this weekend in the Expedition, but now their trip's cancelled and she's not sure how much it's going to cost to get her SUV fixed.

"If you have an accident, just be honest, be upfront. It's not that big of a deal. And, most of the time you can figure it out and come to terms and get everything squared away between each other, but now, if you don’t, that makes bigger problems for you that you don't need," said Dunne.

If you recognize either of the suspects, or can tell deputies where to find the Dodge Charger, submit an anonymous tip to Crime Stoppers through the P3 Tips app on your cell phone, or call the hot line at 1-800-222-TIPS(8477).