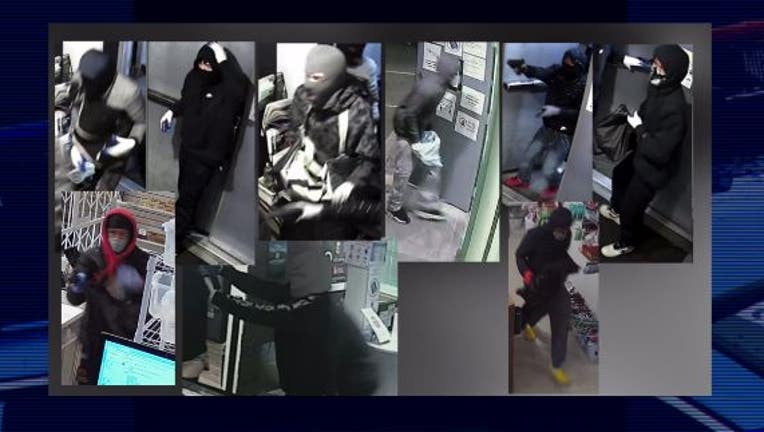 WANTED IN SEATTLE - Cash and bud: It's a tempting lure for a crew of crooks hitting marijuana shops in Seattle, terrifying the clerks with their guns and at the rate it seems to be happening, somebody is going to get shot.

Detectives are asking for your help to identify the suspects who may be responsible for as many as six armed robberies.

“They're hitting them hard, they're armed. They are all masked up. You watch this video and it's going to happen like that. They're in-and-out of this place in less than two minutes,” described Ret. Det. Myrle Carner with Crime Stoppers of Puget Sound.

Seattle Police have been tracking a string of takeover-style armed robberies, including one involving four suspects at Trees Pot Shop in August. Surveillance video shows them rush in just before closing time with guns. Detectives say the same shop was hit a second time, on August 23rd, by three suspects, including one armed with a pistol with an extended magazine. "There's a still shot where the suspect actually takes the gun, puts it right up to the victim's head and holds it there for over a minute,” said Ret. Det. Carner.

In each robbery, the suspects bring garbage bags or gym bags to fill up. “They even took a tip jar in this particular case, plus, a pretty large quantity of marijuana products,” said Ret. Det. Carner.

Then, on September 1st, detectives say three suspects armed with pistols entered Hashtag Cannibas on Nickerson St. just before 11pm and jumped the counter. A suspect wearing bright yellow shoes demanded an employee give him the cash from the registers. A second suspect in a red hoodie forced an employee into a back room and tried to get him to open the safe, but the clerk didn`t have the combination. A witness says they fled in possibly a red or maroon Dodge Charger.

“They're getting more and more dangerous. They're taking chances,” said Ret. Det. Carner.

On Saturday, September 12th at 11:39pm, detectives say five suspects entered a marijuana store at 300 NW 85th St. in Greenwood and forced the employees, security guard and two customers to the floor at gunpoint. The suspects brought gym bags and stole product from the display cases. They also forced one of the budtenders to open the cash register. A suspect wearing red shoes appeared to be the ring leader, while another suspect stood at the door, timing the suspects. They left after one minute and ran to a silver 2017 Toyota Prius with a temporary DOL tag in the rear window. The vehicle also had dealership advertisements from Toyota of Kirkland, or Toyota of Renton.

The most recent robbery was the night of September 21st at Greenworks Cannibas on N. 105th St. in Greenwood. It involved four suspects:

Detectives are hoping somebody has information on any of the suspects committing these crimes. “You’re doing them a favor by turning them in, actually, because sooner or later, somebody is going to get shot and hopefully we're not looking at a murder case,” said Ret. Det. Carner.

If you recognize any of the suspects, use the P3 Tips app on your smart phone to submit their names, or any information you have to Crime Stoppers of Puget Sound. You can also upload photos and video through the app. You can also call the hot line at 1-800-222-TIPS(8477). It’s anonymous and you’ll get a cash reward of up to $1,000 for each suspect that your tips help identify and arrest.