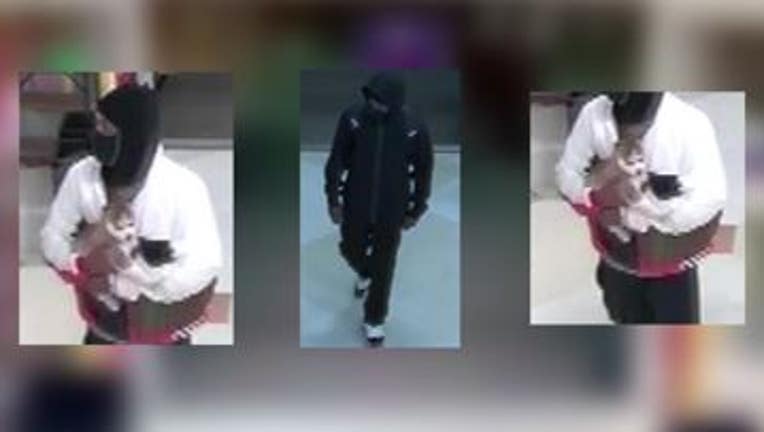 WANTED IN SUMNER - Dog-lovers are really going to despise these two suspects who Sumner Police are trying to identify.

If you’re going to be a criminal, don't pull your puppy into the middle of it - anything could have happened.

Detectives say the suspects seen walking into the Fred Meyer in Sumner on October 7th were holding the dog when they committed a robbery in the jewelry department at gunpoint.

"When they entered the store, the taller of the two was carrying a tan and white Husky puppy, which he continued to carry around the store for several minutes. They were shopping around the jewelry store. The taller of the males produced a handgun and demanded that the jewelry store employees load up all the diamond rings, which they got away with. Witnesses reported that they were possibly associated with a white sedan, Honda-type vehicle. They were pretty calm about it, so my presumption is that this wasn't the first time they have done this. My hopes are that someone out there will recognize these folks and be able to provide us some information,” said Sumner Police Det. Troy Nikolau.

Detectives say they stole more than $150,000 worth of diamond rings.

Both suspects are described as black and in their 20s. The taller one standing at around 6 feet, the second suspect at about 5'6".

This is a serious crime in any city, but Det. Nikolao says especially in Sumner. "I've been here for 26 years and this is probably the biggest theft and robbery that we've encountered. My biggest concern is they used a firearm in this robbery and anytime firearms are involved, it makes the incidents more dangerous and my fear is that it could go wrong, another robbery could go wrong and they could end up injuring or killing somebody, innocent person or an employee."

If you recognize either suspect or that tan Husky pup they held onto while they held-up the store, use the P3 Tips app on your smart phone to submit the information to Crime Stoppers of Tacoma-Pierce County. You can also upload photos through the P3 tips app.

It is anonymous and you'll get a cash reward of up to $1,000 for each suspect if your tip leads to an arrest.