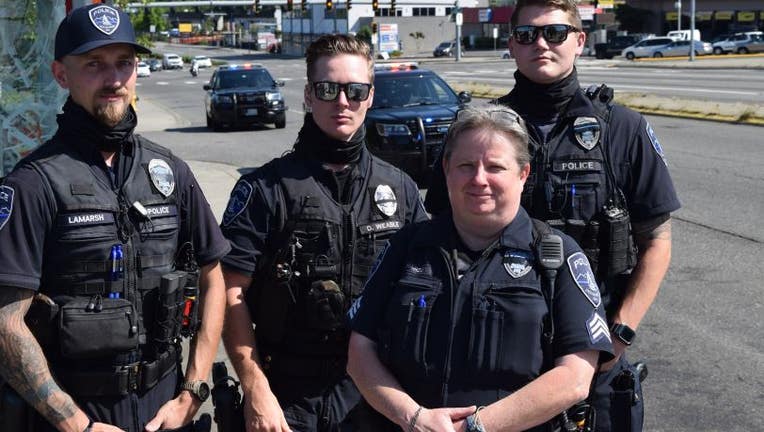 KENT - Quick action by four Des Moines Police officers is being cited as the reason a 15-year-old shooting victim, as well as two other victims are alive today after a shooting injured six people.

They were wounded in a shooting at a bus stop near Kent-Des Moines Rd. and Pacific Highway South at about 6pm the evening of July 13th.

A citizen flagged down Des Moines Police K9 Officer Doug Weable, who was headed home after his shift. “There were probably 15 people in the bus stop and everybody was kind of acting frantic,” said Ofc. Weable.

He quickly radioed for additional officers and began administering first aid to a 15-year-old lying on the sidewalk. “I ripped his shirt off, kind of scanned for mass hemorrhage and found that he was shot in the back,” said Ofc. Weable.

Officer Johnny Tyler was also headed home from his shift when he heard the request go out for the chest seals he carries in his vest along with tourniquets and combat gauze. He started working on the second shooting victim to seal-up the gunshot wound to his chest. “I’m just telling him, ‘Hey, you’re doing good, you’re doing good’ and put the chest seal on him,” said Ofc. Tyler.

Several bystanders then pointed him to another victim around the corner who had been shot in the leg. “I had the tourniquet with me, grabbed a tourniquet, placed it around, strapped it down and cinched it,” said Ofc. Tyler.

Paramedics say the victim could have bled-out in 2 minutes, if not for that quick action.

Officer Shay LaMarsh was the third Des Moines Police officer on the scene. He started helping Ofc. Weable care for the 15-year-old who was in-and-out of consciousness. “I start doing sternal rubs, just talking to him, telling him to stay with me,” said Ofc. LaMarsh.

He and a paramedic got the teen to the medic one unit and worked to keep him breathing after finding no pulse. The teen remains in Harborview Medical Center in serious condition in the Intensive Care Unit.

Ofc. LaShay credits their combat first aid training for knowing exactly what to do. “I feel that one of the officers putting a tourniquet on a lower extremity wound to stop the bleeding saved that person’s life. The other officer put an occlusive dressing on the patient and then rolled them into a recovery position to help them breathe and then another officer started CPR with one of our paramedics and that patient survived,” said Senior Paramedic Rick Arnone with King County Medic One, who was the second unit on scene. “Those three patients may have actually died at the scene without their assistance,” said Arnone.

In the middle of saving lives, they also had to worry about the shooter returning to the scene. “We were still keeping an eye out, watching, looking,” said Des Moines Police Sgt. Patti Richards, who was the fourth to arrive.

The two worst victims were teenagers and I had a 16-year-old wanting to hold my hand, because he was scared. All this other stuff going on in the world, at that point in time, it didn’t matter. That’s what we’re here for,” said. Sgt. Richards.

She says they had the right people and the right equipment there at the right time and they did it with two men fighting in the street, who were not involved in the shooting and others across the road yelling at them. The scene was pure chaos.

“There are a lot of great police officers in our region. This incident is a great example of the outstanding work being done by police officers every day. I am very proud of the work done by our officers, Medic One, and South King Fire to save lives and keep our community safe,” said Des Moines Police Chief Ken Thomas.