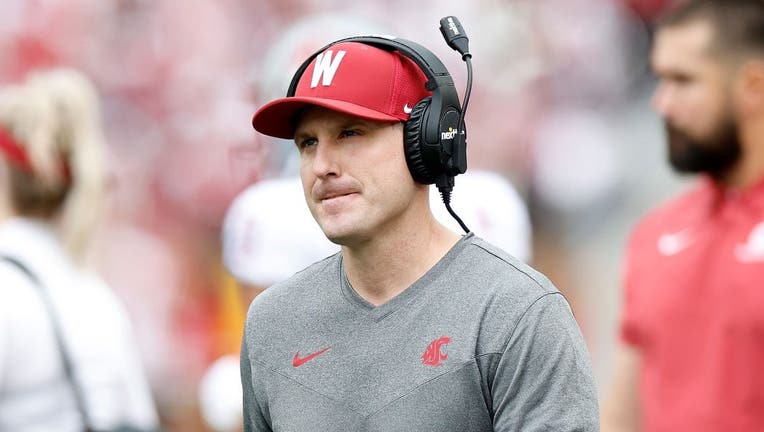 MADISON, WISCONSIN - SEPTEMBER 10: Head coach Jake Dickert of the Washington State Cougars looks on in the first quarter against the Wisconsin Badgers at Camp Randall Stadium on September 10, 2022 in Madison, Wisconsin. (Photo by John Fisher/Getty Im

PULLMAN, Wash. - Washington State coach Jake Dickert has agreed to a contract extension that will keep him tied to the Cougars through the 2027 season.

The school announced Dickert’s extension Wednesday but did not release the financial terms. Dickert’s previous deal was reached after the 2021 regular season and went through 2026.

"We have watched Jake Dickert reset the foundation of WSU football that prioritizes family, selflessness, toughness, leadership and the total development of the young men on our football team," athletic director Pat Chun said. "Coach Dickert and the football staff strive to positively impact all those who come in contact with WSU Football."

Dickert just completed his first full season in charge of the Cougars, leading Washington State to a 7-6 record and a second straight bowl game.

Dickert took over as interim head coach midway through the 2021 season after Nick Rolovich was fired for refusing to get vaccinated against COVID-19. Dickert went 3-2 in the regular season after taking over for Rolovich and had the interim tag removed after the Cougars beat rival Washington in the Apple Cup.

Washington State ended last season with a loss to Fresno State in the LA Bowl. The Cougars will open 2023 at Colorado State.