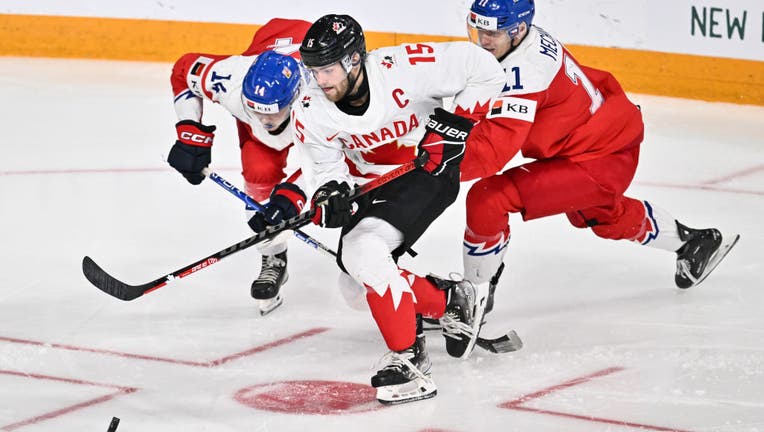 HALIFAX, CANADA - JANUARY 05: Shane Wright #15 of Team Canada skates the puck past Stanislav Svozil #14 and Adam Mechura #11 of Team Czech Republic during the second period in the gold medal round of the 2023 IIHF World Junior Championship at Scotiab

HALIFAX, Nova Scotia - Dylan Guenther scored his second goal of the game at 6:22 of overtime to give Canada a 3-2 victory over the Czech Republic on Thursday night for its record-extending 20th world junior hockey title.

The Arizona Coyotes forward took a pass from Joshua Roy on a 2-on-1 and beat goalie Tomas Suchanek in the 3-on-3 extra period after Canada blew a 2-0 lead in the third period.

Shane Wright, on his 19th birthday, also scored for Canada, and Thomas Milic made 24 saves. Connor Bedard was selected the tournament MVP.

Canada also won the pandemic-delayed summer showcase in Edmonton, Alberta, and is the first repeat winner since it won five straight between 2005 and 2009.

Jiri Kulich and Jakub Kos replied for the Czech Republic, scoring in a 54-second span in the third period. Suchanek stopped 35 shots.

The Czechs stunned Canada 5-2 in the tournament opener Dec. 26.

Earlier, Chaz Lucius completed a hat trick in overtime and the United States beat Sweden 8-7 in the third-place game.

Lucius ended the extra period when he flipped a backhander over goalie Carl Lindbom. Cutter Gauthier had two goals and Logan Cooley, Ryan Ufko and Hughes also scored for the Americans, coming off a 6-2 loss to Canada in the semifinals Wednesday night.

"It’s not the game we want to be in," said Lucius, a Winnipeg farmhand with the Manitoba Moose. "But overall it’s a really memorable experience."

Filip Bystedt tied it for Sweden with 21 seconds left in regulation with his second goal of the game. Oskar Pettersson, Leo Carlsson, Milton Oscarson, Liam Ohgren and Noah Ostlund also scored. On Wednesday, the Czech Republic rallied to beat Sweden 2-1 in overtime.

Kaidan Mbereko was the winner in goal for the United States, stopping 14 of 16 shots in the third period and overtime. Trey Augustine gave up five goals on 20 shots over the first 40 minutes. Lindbom made 28 saves.