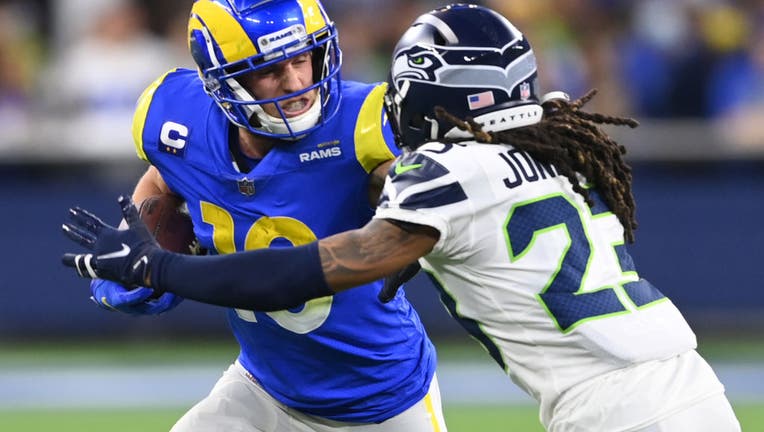 INGLEWOOD, CA - DECEMBER 21: Cooper Kupp #10 of the Los Angeles Rams pushes off Sidney Jones #23 of the Seattle Seahawks after a complete pass during the game at SoFi Stadium on December 19, 2021 in Inglewood, California. (Photo by Jayne Kamin-Oncea/

The Seattle Seahawks have re-signed cornerback Sidney Jones to a one-year deal worth $3.6 million, according to Mike Garafolo of the NFL Network.

The deal can earn as much as $4.4 million with incentives.

Jones, 25, appeared in 16 games with 11 starts for Seattle last season. He recorded a career-high 66 tackles and 10 passes defended.

The Seahawks acquired Jones in a trade last September with the Jacksonville Jaguars. Seattle pivoted to Jones as a starter at left cornerback after trading failed free agent signing Ahkello Witherspoon to the Pittsburgh Steelers and benching struggling starter Tre Flowers. Flowers was eventually waived and claimed by the Cincinnati Bengals.

Seattle moved D.J. Reed back to right cornerback with Jones taking over on the left side. He briefly split starting duties with rookie Tre Brown before Brown was lost for the season to a patella tendon rupture.

Jones was a standout at the University of Washington and appeared destined to be a first-round pick before he ruptured his Achilles during his pro day workouts. He ultimately went in the second round to the Philadelphia Eagles in 2017. After three years with the Eagles, Jones moved on to the Jaguars for the 2020 season.