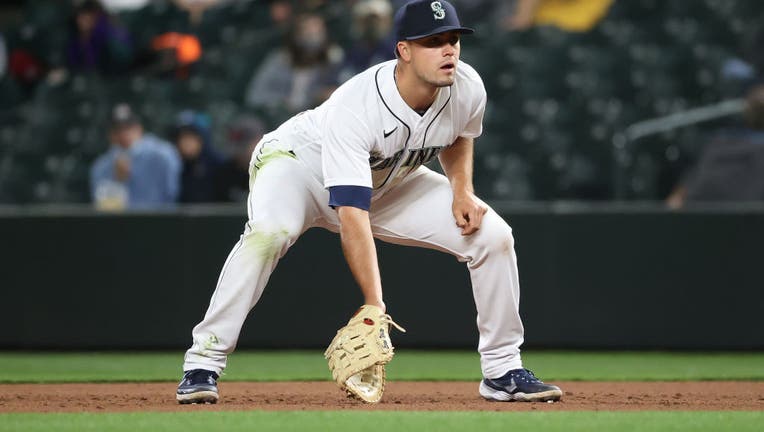 SEATTLE, WASHINGTON - APRIL 19: Evan White #12 of the Seattle Mariners lines up for play during the sixth inning against the Los Angeles Dodgers at T-Mobile Park on April 19, 2021 in Seattle, Washington. (Photo by Abbie Parr/Getty Images)

SEATTLE - Seattle Mariners first baseman Evan White had surgery for a sports hernia and will miss the beginning of the season.

White, 25, played in just 30 games last season before a hip flexor injury in May ultimately ended his season. The injury was worse than initially believed and White had surgery to address that issue last summer.

"It is not ideal. I feel for him. He missed a lot of time. He wants to get out there and play and get things going in the right direction again."

White was expected to begin the season in Triple-A with the Tacoma Rainiers as Ty France took hold of the starting job in White's absence last year. France, 27, hit .291 with 18 home runs, 32 doubles, 73 RBI and a .813 OPS last season in Seattle.

White is a career .165 hitter in 84 games played at the major league level. White has been lauded for his defensive prowess and won a Gold Glove in 2020. However, the offensive side of his game has been an issue. He strikes out in 41 percent of his at-bats and has a career OPS of just .544.

White had reported to spring training seemingly close to full strength. However, the hernia began to cause issues and further examination revealed the nature of the injury.

"I was fine until I stepped on the baseball field and had to react or move from side to side," White said, via Ryan Divish of The Seattle Times.