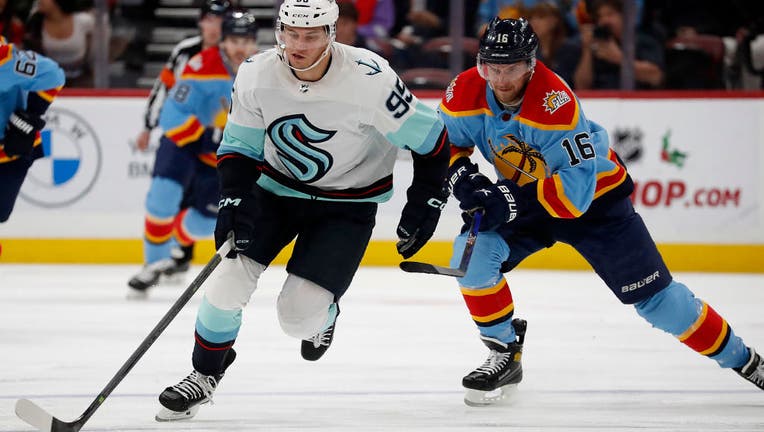 SUNRISE, FLORIDA - DECEMBER 11: Andre Burakovsky #95 of the Seattle Kraken skates for possession against Aleksander Barkov #16 of the Florida Panthers at the FLA Live Arena on December 11, 2022 in Sunrise, Florida. (Photo by Eliot J. Schechter/NHLI v

Matty Beniers, Jordan Eberle, Daniel Sprong and Yanni Gourde also scored to help Seattle snap a three-game losing streak. Martin Jones finished with 23 saves as the Kraken improved to 3-1 all-time against the Panthers — including 2-0 in Florida.

"We wanted to get back to who we are," Seattle coach Dave Hakstol said. "We had lost three in a row so we needed that 60-minute performance in order to push back in the right direction. Our players did that. ... I thought we were pretty consistent, our special teams were solid and contributed to the win. Goaltending was solid. That’s what it takes to get a good road win."

Eric Staal and Chris Tierney scored for the Panthers, who have lost two straight and three of four. Sergei Bobrovsky had 27 saves while starting for the second straight night with Spencer Knight out due to illness.

"There were an awful lot of difficulty in some basic things in our game," Florida coach Paul Maurice said. "We had trouble moving the puck. There are physical turnovers and mental ones and we had a little bit of both. … As the game wore on, you saw the mental aspect. We started a little bit off then they pushed and I don’t think we found a way to get better during the game."

Seattle opened the scoring 1:04 into the game when Beniers scored on a turnover deep in the Florida zone. It was his 11th of the season.

The Panthers tied the score at 7:34 of the second when Staal scored his first goal in more than 18 months. The veteran center, who did not play in the NHL last season, signed a one-year deal with Florida in October.

Burakovsky then gave Seattle the lead for good 1:31 later with his 10th of the season.

Florida was unable to tie the score on a power-play chance in the third and Eberle scored his seventh soon after it ended to give the Kraken a 3-1 lead at 7:15.

"I think it was a much better effort than we had seen lately," Gourde said. "It was a much more complete game, our compete level was higher. Everything was better tonight."

The Panthers’ Ryan Lomberg was hit with a two-minute penalty for roughing and a five-minute major for boarding a little more than four minutes later. The Kraken took advantage as Sprong scored on the power play with 4:51 left for his sixth.

Tierney capped the scoring with his second with 1:17 remaining.

NOTES: The Panthers continue to deal with players feeling under the weather. After captain Aleksander Barkov missed six consecutive games before returning Thursday night, center Anton Lundell has missed four games and Knight has been out for three. ... The Panthers also have defenseman Radko Gudas in concussion protocol after he was hurt in Seattle on Dec. 3.