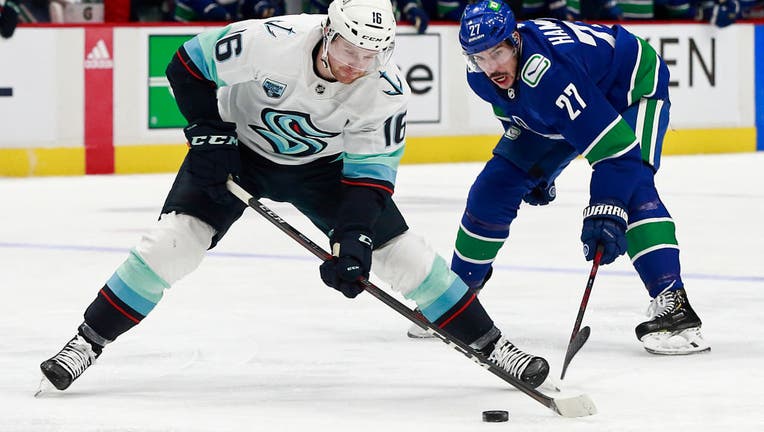 VANCOUVER, BC - FEBRUARY 21: Travis Hamonic #27 of the Vancouver Canucks checks Jared McCann #16 of the Seattle Kraken during their NHL game at Rogers Arena February 21, 2022 in Vancouver, British Columbia, Canada. (Photo by Jeff Vinnick/NHLI via Get

SEATTLE - The Seattle Kraken placed leading goal scorer Jared McCann on injured reserve Thursday morning due to an upper body injury that will keep him out for tonight's game against the Boston Bruins.

"We'll be without him hopefully for not too long of a period of time but for sure tonight we will be," Hakstol said.

Additionally, Hakstol said that forward Yanni Gourde, the team's third-leading scorer, will be a game-time decision due to an undisclosed injury. Forward Kole Lind has been recalled from the team's AHL affiliate, the Charlotte Checkers, and is available for tonight's game.

With Jaden Schwartz still on injured reserve and Brandon Tanev out for the season due to a torn ACL in his knee, the Kraken roster is currently lacking offensive punch. It will be that much more depleted with McCann's absence and Gourde being questionable to play. McCann leads the Kraken in both goals and points. His 21 goals through 48 games this season already are a new career-high.

"Obviously it's different when it's injuries, but I think almost every team has had to deal with (absences) with COVID, next guy stepping up and trying to do the job," forward Ryan Donato said. "We have a big part of our team missing and hopefully we can step up tonight.

"It's tough. He's definitely a big part. I think he'll do the best he can to get back to us as soon as possible. But I think there are a lot of guys that are eager to step up as well and prove to themselves and to the team that they can score as well. Although we will miss Jared, I think guys are eager for the task and hopefully we have some guys step up."

The Kraken are scuffling their way through their debut season in the NHL. They've lost five straight games and haven't managed a win at home since a 5-3 win over the Florida Panthers on Jan. 23. The Kraken fell behind the New York Islanders 4-0 on Tuesday night before ultimately losing by a 5-2 margin.

"There's been some games where we show up for a period and then we don't show up," Donato said. "I think if we stay consistent and do the little things right, do them the right way and play a full 60 minutes, we're a tough team to beat when we do play the right way. There's periods where we dominate and then there's periods where we don't look like the same team. So I think if we show up for a period and are all on the same page, usually we find success."

Fox 13 got an exclusive look at the progress of the new arena being built in Palm Springs for the Seattle Kraken's minor league AHL affiliate, the Coachella Valley Firebirds, which is scheduled to open this fall.

The Bruins (62 pts, 29-17-4) currently occupy the final Wild Card spot in the Eastern Conference. However, they have a nine-point edge on their closest threat to the playoff spot in the Columbus Blue Jackets (53 pts, 26-23-1). The Bruins are also set to see the return of Brad Marchand to the lineup tonight after a six-game suspension for punching and high-sticking Pittsburgh Penguins goaltender Tristan Jarry.