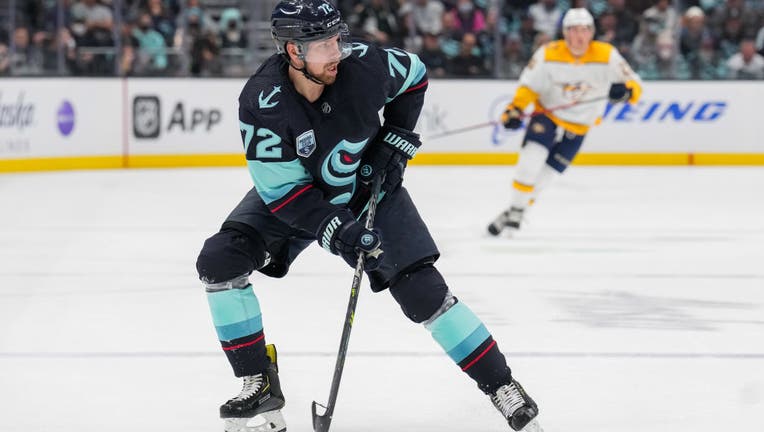 SEATTLE, WASHINGTON - MARCH 02: Joonas Donskoi #72 of the Seattle Kraken looks to pass the puck during the first period of a game against the Nashville Predators at Climate Pledge Arena on March 02, 2022 in Seattle, Washington. (Photo by Christopher

The Seattle Kraken have placed winger Joonas Donskoi on injured reserve and recalled forward Kole Lind from the Charlotte Checkers of the AHL.

Donskoi was scratched for Thursday night's 4-3 overtime loss to the Ottawa Senators. He was last on the ice with 11 minutes remaining in the team's 6-4 loss to the Toronto Maple Leafs.

There wasn't anything that stood out during Donskoi's final three shifts against the Maple Leafs. He was listed with an undisclosed injury by the Kraken.

Donskoi, 29, has played in 57 games for the Kraken this season. He has two goals and 15 assists. He picked up his second goal of the year last week against the Washington Capitals.

Lind, 23, has picked up two assists in five games played for Seattle this year. Lind leads the Checkers in points this season with 35 points (17 goals, 18 assists) in 46 games played at the AHL level.

The Kraken play on the road against the Montreal Canadians on Saturday before returning home for two games against the Tampa Bay Lightning (Wednesday) and Detroit Red Wings (Saturday).

The Kraken have lost 12 of their last 13 games. Two of the losses have come in overtime. Seattle is tied with the Arizona Coyotes for the second-worst record in the NHL with 40 points. Only the Canadians have a worse record.