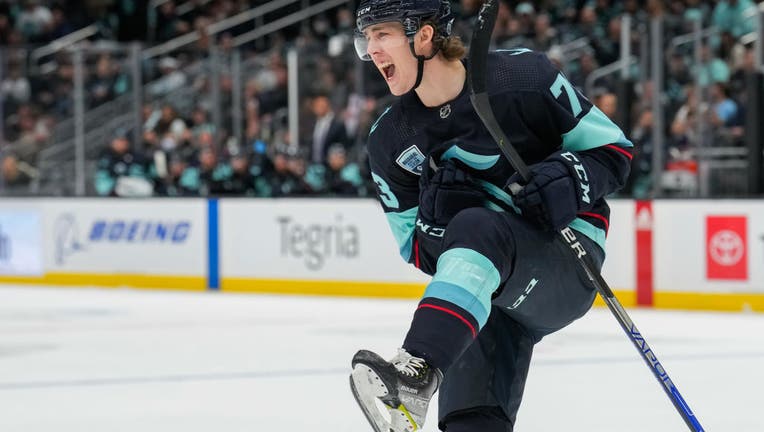 SEATTLE, WASHINGTON - APRIL 01: Kole Lind #73 of the Seattle Kraken celebrates after scoring his first career NHL goal during the third period against the Vegas Golden Knights at Climate Pledge Arena on April 01, 2022 in Seattle, Washington. (Photo b

Right winger Kole Lind is doing his best to make a strong impression for the Seattle Kraken over the closing stretch of the team's inaugural season.

With six key contributors now playing elsewhere after the NHL trade deadline, new opportunities have surfaced for the remaining members of the Kraken to step up with expanded playing time.

Lind is doing his best to seize the opportunity at hand.

"I'm getting a big opportunity here and I need to make the most of it," Lind said. "I've been playing hard and doing my thing and bringing it at both ends of the ice. I think there's still little keys to my game that I can keep bringing, the grittiness being one of it, but I think as I get more comfortable and more reliable, I think that'll come."

Lind, 23, has been a fixture in the Kraken lineup since the trade deadline sent forwards Calle Jarnkrok, Mason Appleton, Colin Blackwell, and Marcus Johansson to other teams. With Jaden Schwartz still sidelined due to injury, Lind has played in eight of the Kraken's last nine games. He's picked up two assists and scored his first career goal last Friday night against the Vegas Golden Knights.

Lind grabbed a pass that deflected off the left wall from Ryan Donato. He found himself with space and closed down on the net around the left circle. As the defense closed, Lind fired a wrist shot inside the right post and by goaltender Logan Thompson for his first goal.

"Lots of guys say they black out, whatever. I remember every moment. It was unreal," Lind said.

Lind had come extremely close on a few occasions in recent weeks before finally getting his breakthrough goal.

"I thought he played phenomenal," teammate Yanni Gourde said of Lind's effort. "I thought he played really good looking north, playing the right way, winning races, winning battles. I knew when he was going in those battles, he came up with most of those pucks and that's the first thing you look at when a younger guy gets in the league is his willingness to win those battles.

"He's been great at it throughout the last whatever games he's been playing up with us and tonight again, he was great at it, winning puck races, winning battles, taking pucks to the net, going around. He had a few scoring chances. So all of that has been great."

Lind had been one of the leading scorers for the Charlotte Checkers of the AHL – the Kraken's minor league affiliate for 2021-22 –  before getting the call-up for the rest of the season. He had 17 goals and 18 assists in 46 games played in Charlotte this season. Lind had only played in seven career games prior to this year.

"It really speaks to Lindy listening to some of the messages that we gave him as he went up and down and work at those areas," coach Dave Hakstol said. "But there's also just finding a comfort level. He's a pretty good player and there's still there's a lot of room to work and grow and  some areas of his game that he needs to solidify. But the key thing is he's working at it. The hard parts of the game he's working on. The play on the wall, decision-making in tight areas. The offensive side is coming and that's nice to see."

In addition to the goal against Vegas, Lind nearly picked up another assist on a pass to Gourde in front of the net. Lind had the puck behind the Vegas net and delivered a perfect pass to Gourde, who was crashing the net. The shot deflected off Thompson's thigh pad and redirected off the crossbar to stay out.

"Not only did he have scoring chances tonight, he set up," Hakstol said. "You look at the play that he made to Gordo in the second period. That was just a nice touch and good timing. So that offensive side to his game looks to be there. It's the other pieces. To be a good two-way forward in this league, it's a lot of work. It's a work in progress, but he's talked about it the other night, he's making a lot of positive strides."

The Kraken have 13 games remaining this season. The roster will surely look different next season as the team rebuilds its ranks moving forward. Lind is doing his best to show he deserves to be a part of the conversation as one of their bottom-six forwards.

"And at the end of the day, the coaching staff, they don't just see the stats," Gourde said. "They see the little things. They see you winning battles. They see you on the right side of the puck. They see you blocking a shot. And he's been doing those things and us as players, we see that too, and it lifts our bench and gives us life. And like I said, he's been tremendous doing it."