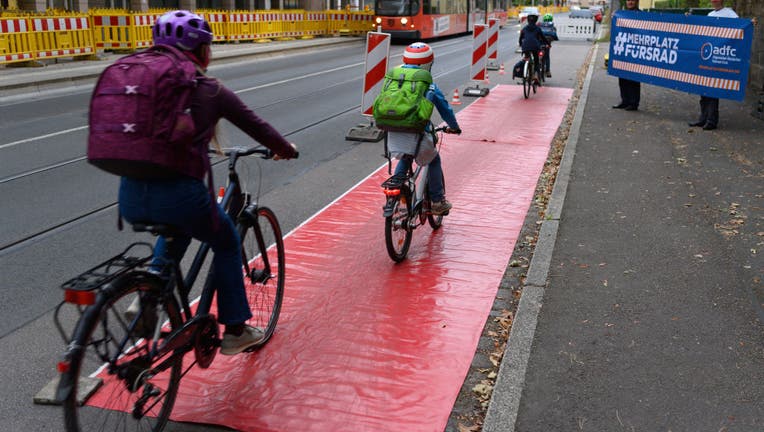 17 September 2020, Saxony, Dresden: Children ride their bikes on a symbolically designed bicycle path during a bicycle demonstration by the ADFC Dresden for more safety on the way to school. The association shows in an exemplary way that in many plac

OVERLAND PARK, Kan. - It’s that time of the year again when students begin their return to the classroom, but forgetting a critical item before they head off on their bike to school could mean life or death.

Pediatric doctors are warning parents after a new study shows increased bike accidents with kids. This comes after the American Academy of Pediatrics reviewed the benefits of helmet use and took action this month to strongly urge the use of them.

Ask any kids what makes them happy, and most will say riding their bike with friends.

However, bicycle riding is one of the leading causes of sport-related head injuries in pediatrics, resulting in an estimated 26,000 emergency department visits annually, according to Schifman.

"And we’re very worried about it right now with the increase of kids riding their bikes to school – combined with many new high school drivers on the road and adults not used to sharing the roads with kiddos," he added. "It’s a perfect storm!"

But with so much education conducted around the country in the past decade, Schifman echoes the concerns of many ER doctors who feel they would have anticipated an increase in helmet usage.

However, AAP's study of skateboarders, snowboarders and bicyclists younger than 18 found that 52% of children injured were not wearing helmets. Yet doctors now know that wearing a helmet can reduce the risk and severity of a head injury by 63% and loss of consciousness by 86%.

"Children, teens and their adult caregivers should always wear a sport-appropriate and correctly fitting sport helmet during participation in recreational sports, including, but not limited to, bicycling, snow sports, ice skating, and equestrian sports," Schifman said.

And because of the differences in engineering, helmet types should match the sport for which they are designed, Schifman adds.

To promote helmet use, Schifman said kids should be encouraged to choose their helmets and decorate them to reflect their individuality. Reflective stickers and lights can also be added to increase the child's visibility when bicycling on the road.

"And parents and grandparents should be modeling this behavior," Schifman said. "Just as the flight attendant says before takeoff, ‘Put your oxygen mask on before assisting others! Put your helmet on and then help your child to the same.'"