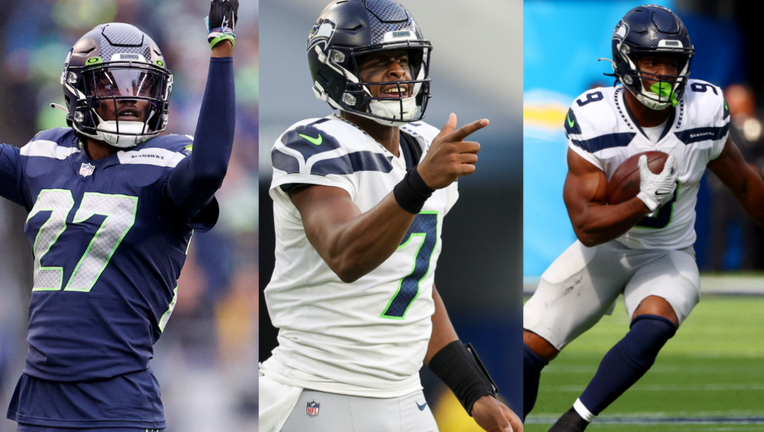 Tariq Woolen (left), Geno Smith (middle), and Ken Walker III (right) were all named as players of the month in the NFC on Wednesday. Smith was named offensive player of the month while Walker and Woolen were named offensive and defensive rookies of t (photos by Steph Chambers, Harry How, Katelyn Mulcahy / Getty images)

It's the first time since rookie of the month awards were added in 1996 that the same team has had three awards winners in the same month.

"On behalf of myself, Shane Waldron, the offensive line, our offense, you know, I'll gladly accept that," Smith said of the honor. "It just means we've been playing well as an offense. And we've got to continue that, you got to keep it going."

In five games in the month of October, the Seahawks posted a 4-1 record as they moved into first place in the NFC West. Smith completed 69.4 percent of his passes for 1,207 yards with nine touchdowns, one interception, and a passer rating of 111.7. Smith also rushed for 143 yards and a touchdown on 25 carries.

"He's the real deal," head coach Pete Carroll said earlier this week. "This is the real, there's no mystery he's going to run out of gas or something. It's not like that. He knows exactly what he's doing and he shows you week in and week out, throw after throw after throw. There's nothing for us to hold him but in the highest of expectations really. What a thrilling story for the kid. He just hung in there so tough and outlasted it, and now he's enjoying all the fun of it."

Smith leads the NFL in completion percentage at 72.7 percent and is the second-ranked quarterback in the NFL behind only Josh Allen of the Buffalo Bills per Pro Football Focus' grading system. Smith is the favorite to win NFL Comeback Player of the Year as the season reaches its midpoint and has put himself into the conversation for league MVP, though Allen, Patrick Mahomes of the Kansas City Chiefs and Jalen Hurts of the Philadelphia Eagles are strong contenders for the award as well.

"I have just focused on what I am doing inside of this building," Smith said. "I think it’s more so people just seeing me play. I haven’t played in a bunch of years, outside of preseason, and I think people are now getting a chance to see me play in this offense with these types of players. It’s more so of just all of us doing well more than just myself.

"A lot of people wish they were in this position, and I’m grateful to have worked my way into this position. Also, knowing who I am, I am very set in who I am. I know exactly who I am and what I can do, so I never bought into the narrative that was out there. I just didn’t get this good over the course of one offseason."

For Walker and Woolen, they are the first rookies from the same team to win offensive and defensive rookie of the month in the same month since the awards debuted in 1996.

Woolen is tied for the NFL lead in interceptions with four through eight games. He had interceptions in four straight games off of Marcus Mariota (Atlanta), Jared Goff (Detroit), Andy Dalton (New Orleans) and Kyler Murray (Arizona). Safety Quandre Diggs wondered when teams would stop throwing his direction given the way he's played this year and it seems that may be starting to happen now. Last week against the New York Giants, Daniel Jones targeted a receiver covered by Woolen just twice with one pass breakup and one completion.

Woolen also has a pair of fumble recoveries on balls knocked out by fellow rookie Coby Bryant. Woolen is among the front-runners of NFL rookie of the year along with Ahmad "Sauce" Gardner of the New York Jets, who was Bryant's college teammate at Cincinnati.

"I feel like the job isn’t done until it is Rookie of the Year," Woolen said. "That’s the mentality that I’ve always had since the beginning of the season. Now that there is a chance and it’s an obtainable goal, I just want to try to grab it, but at the same time, I just want to have fun with my teammates. As long as you do that and as long as we are winning, then everybody is getting noticed. When you are winning, that’s when the awards come in. As long as we keep doing our thing, I’m happy."

Walker has taken over the starting running back job after Rashaad Penny was lost to a broken leg in the loss to the Saints. In October, Walker rushed for 432 yards and scored five touchdowns, which included scores from 69 and 74 yards.

"One of my main goals was to make a positive impact on the team when I first got here," Walker said. I’ve been trying to stick to that since, so that has been my main goal and just staying focus and grinding. I’m going to keep trying to achieve that goal."

Walker and Woolen are just two of six rookies playing big roles for Seattle this year. Bryant has been the team's starting nickel cornerback most of the year. Second-round pick Boye Mafe has become a key rotational piece at outside linebacker and started a trio of games, and offensive tackles Charles Cross and Abe Lucas have helped set the foundation of the offense up front that has allowed Smith, Walker, DK Metcalf and Tyler Lockett to shine.

"It speaks volumes to the coaching, getting those guys ready to play," Smith said. "Then to the individual for going out there and making the plays, taking the coaching, and putting all of those things to use. We have a lot of really good rookies, and they are contributing, all of them are in different ways. It’s really fascinating to see."