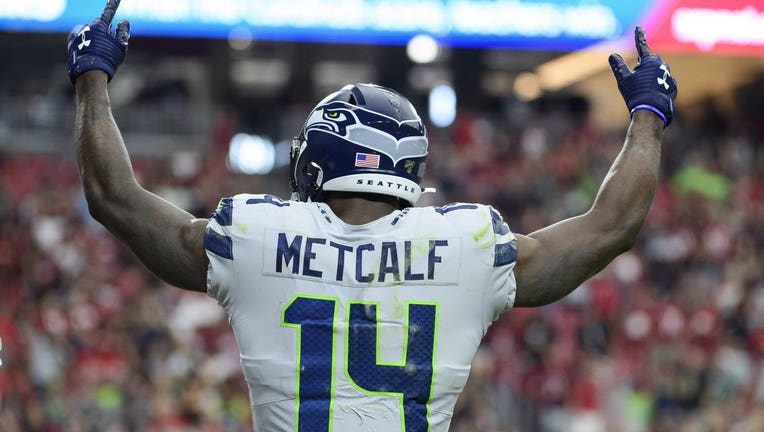 Read a transcript of the interview below:

Levine: Well D.K. this off-season you competed in the 100 meters. You made a cameo and a music video, you took part in the celebrity softball game at the MLB All-Star game, what’s next for you?

Metcalf: I think it's time to get ready for football season. You know I had some amazing experiences during the off-season but, now right it’s time to lock in.

Metcalf: (laughs) that should be in the near future though, next off-season

Levine: Love it. Russel has his hands in so many different things also. What has he told you, if anything, about being able to compartmentalize everything, to be able to give your full focus to football when you need to?

Metcalf: He knows how to focus up,  you know when the ball is you know put down, and then during the off-season and you know during his free time he knows how to take advantage of those business opportunities that he’s teaching me

Levine: We all enjoyed watching you compete in the 10 meters. Take me through what you were thinking as you're 50 meters in and pretty much keeping up with everybody else?

Metcalf: I mean it was a great experience. You know to took my hat off to all the track runners out there and the sport of track, you know it doesn't get a lot of publicity or a lot of credit as it should be but those were some amazing athletes.

Levine: What was it like though in your head like, you're keeping up with these guys halfway through, do  you think you had a chance

Metcalf: Oh for sure I thought I had a chance but you know the last 40 meters kind of got me

Levine: You said speed is speed, that your training for the 10 meters can potentially make you faster on the football field. Do you feel faster right now than last season?

Metcalf: Oh for sure, I feel faster, you know leaner, more flexible, so I believe the sport of track and that track training that I did for 8 weeks really help me.

Levine: Is it a safe guess to say that all your teammates and other people now are kind of wanting to challenge ou to a race? Is that happening?

Metcalf: (laughs) No no, I haven't gotten any challenges, so i think everybody knows their place with me.

Levine: Okay I asked D’wayne Eskridge on Draft Night about this before you competed in the 100 meters, and he wants a chance with you so you're going to have to report back to us.

Metcalf: Alright I will. (laughs)

Metcalf: It’s gonna be fun, but I know we're gonna come out with a dub, so I’m not worried about it.

Levine: You’ve already been talking smack to AJ I'm sure.

Levine: I know it's a long way off, but I saw you retweet a congratulations to Nate Burleson for his Emmy win. Would you want to be a football analyst one day? And I ask that because Nate’s first TV GIG was right here on Qw sports on Sunday nights after Seahawks games while he was playing, so just wanted to let you know you’re welcome any time.

Metcalf: Oh yes sir I appreciate it, but I don't think I’ll be a good football analyst.

Levine: So what would you wanna do when football career is all said and done? I know that’s a long way off.

Metcalf: I mean who knows I’m a very spontaneous person, so who knows how I'm feeling in you know 7, 8, 9, ten years from now. So we’ll see.